Disney World has been forced to cease operations as the weather in Central Florida once again precludes some of the Resort’s operations.

In the name of Guest and Cast Member safety and comfort, Disney World has been forced to close one of its parks as the forecast calls for temperatures in Florida that are simply too low to keep it open.

On Thursday morning, Disney World announced that Disney’s Blizzard Beach would not operate Thursday or Friday because of the colder temperatures in the area.

WATER PARK UPDATE: Central Florida water parks are closed b/c of cooler temps in the area.

Universal Studios Orlando Resort also announced the closure of Volcano Bay on Thursday and Friday, and SeaWorld Orlando said its water park, Aquatica, would not be open to guests on Thursday. At the time of this post, there’s no word about whether Sea World will open its water park on Friday. That announcement could come on Thursday or early on Friday morning.

RELATED: Universal Studios Orlando is Offering an Annual Pass with Unlimited Visits for Under $200

According to Weather.com, temperatures in Bay Lake, Florida, aren’t expected to exceed 67 degrees Fahrenheit on Thursday. On Friday, the area will see lows in the 50s and a high of only about 68 degrees. On Saturday, there’s a slight warm-up into the low 70s. 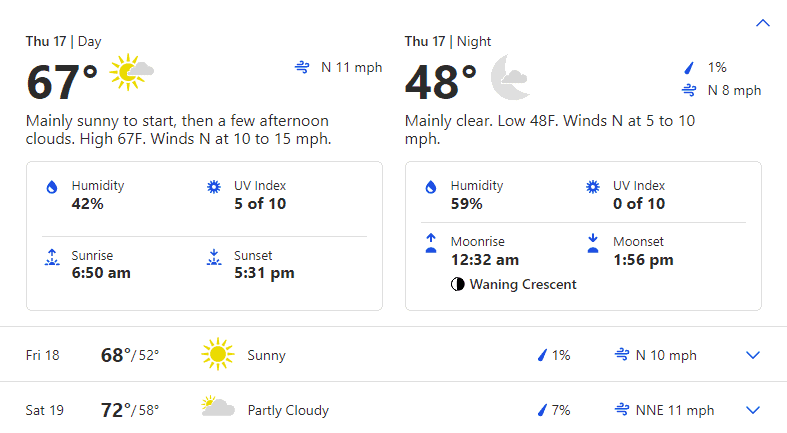 The closures on Thursday and Friday, November 17 and 18, respectively, mark the third incidence of weather-related closures at the Walt Disney World Resort since late September, when the parks first announced plans to close in preparation for Hurricane Ian, a massive near-Category 5 storm that pummeled the Sunshine State, causing billions of dollars in property damage.

RELATED: First Estimates of Damages from Hurricane Ian Have Been Reported in Florida, and the Numbers are Staggering

On November 8, Disney World announced plans for a phased closure in response to Subtropical Storm Nicole, which was forecast to become a hurricane before making landfall on the east coast of Florida.