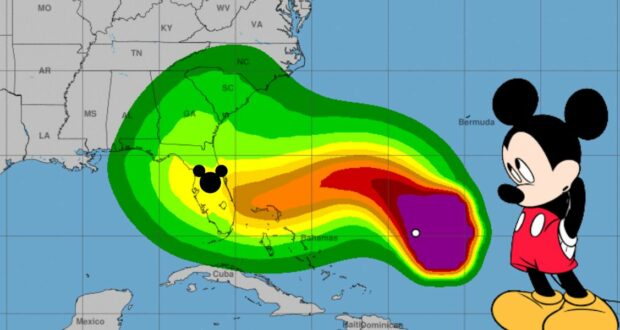 We previously shared the news that the National Hurricane Center was keeping an eye on a storm with Florida in its path. Now, reports are showing the storm could hit Florida near hurricane strength.

Time to keep an eye on the weather, Walt Disney World Resort travelers! Even though several of Florida’s coastal towns are still picking up the mess from September’s Hurricane Ian, it looks like the 2022 hurricane season isn’t done just yet.

With the hurricane season running through November 30, 2022, it’s easy to ignore the signs and focus on the upcoming holidays… but the National Hurricane Center is advising otherwise.

Now, the previously announced storm has organized enough to be named Subtropical Storm Nicole as of Monday, November 7, 2022, with its location in the Atlantic Ocean.

Orlando Sentinel reports, “As of 8 a.m., the system was located about 520 miles east of the northwestern Bahamas with maximum sustained winds of 45 mph moving north-northwest at 14 mph. It’s expected to slow down its forward speed later Monday and begin a west to west-southwest push from Tuesday to Thursday.”

Storm Nicole is projected to hit Florida’s east coast by Wednesday, November 9, 2022, with near hurricane strength, according to the National Hurricane Center.

The National Hurricane Center (NHC) has announced, “On the forecast track, the center of Nicole will approach the northwestern Bahamas on Tuesday, move near or over those islands on Wednesday, and approach the east coast of Florida by Wednesday night.”

The storm is currently classified as subtropical, with 40 mph winds out as far as 275 miles. Nicole is expected to form a more defined eye and gain strength before it impacts Central Florida.

As Subtropical Storm Nicole forms, NHC goes on to report, “It’s not out of the question for Nicole to reach hurricane strength, especially given how warm the waters are in the vicinity of the Bahamas. It should be stressed, however, that no matter Nicole’s ultimate intensity, the storm’s large size will likely cause significant wind, storm surge and rainfall impacts over a large portion of the northwestern Bahamas, Florida, and the southeastern coast of the United States during much of the upcoming week.”

Fans flooding to Walt Disney World Resort to check out the massive Christmas tree (video below!) at Magic Kingdom Park, and more holiday decor may be in for a wet vacation.

We highly recommend keeping a close eye on the National Weather Service for the latest developments. If you do have plans to visit Disney Parks or Disney Springs this week, here are a few tips on how to enjoy rainy days at the Parks. Stay safe, Disney fans!