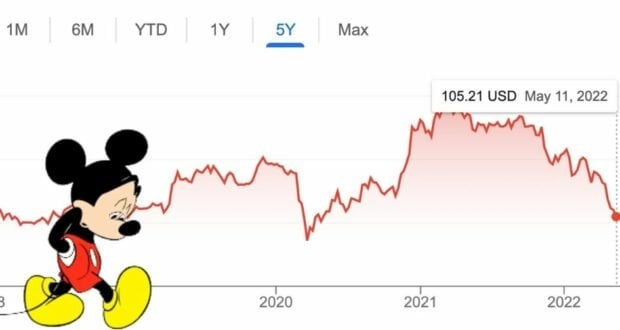 On May 11, The Walt Disney Company held its Second Quarter Earnings Call and, overall, the numbers reported were incredibly good. Disney’s personal streaming service Disney+ saw a growth of 7.9 million subscribers — which exceeded the estimates of Wall Street. Hulu and ESPN+ also saw growth, which was positive. Disney Parks saw revenue of over 6 billion — which many considered impressive because several of its international Parks saw closures during the quarter due to the pandemic. Even though things seemed to be going really well for the company, one thing was decidedly not positive. Once again, Disney’s stock ended the day lower than when it started. At market close, Disney stock sat at $105.21, which was just one of its recent lows. Over the past couple of months, Disney stock has been in solid decline and, with these recent low closures, Disney has eliminated nearly 5 years of solid stock gains that the company had been seeing. Before these new stock lows, the lowest the stock had been in recent years was at around $85 per share, but that was in March 2020 — the month the COVID-19 pandemic forced all of Disney’s theme parks, domestic and international, to shut down. At that time, Disney stock was not the only one to tank, but since then, it has steadily grown. Until now.

In February 2o22, Disney stock sat at around $156 per share. Not long after that, the company found itself in a lot of hot water with people on both sides of the aisle. The Florida House and State Senate passed the Parental Rights in Education bill, and Disney stayed silent, which angered those against the bill. After building pressure, Disney spoke out, which angered those who supported the bill. Since then, Florida has stripped Disney of its right to function as its own government under the Reedy Creek Improvement Act.

There have also been numerous protests outside of Walt Disney World in Florida and outside the company’s headquarters in Burbank, California. #BoycottDisney has trended on Twitter and people have accused Disney of supporting “grooming.” Consumers who are still upset with the company have claimed that they are canceling their Disney vacation and their Disney+ subscriptions.

All of these issues combined are the most likely cause of Disney’s stock tanking. Disney is also not the only company struggling to keep its stock value up, but it is surprising for many to see them struggling, considering they have always been so successful. The stock market has been incredibly volatile lately, so many companies are in the same boat as Disney.

Disney has not publicly commented on what it plans on doing to try to bring the stock up. But the company is actively working to bring new content to Disney+ to add more subscribers and bringing new and exciting rides to their Parks around the world.

2022-05-11
Krysten Swensen
Previous: Disney announces it’s working to “control attendance” in parks, to ensure a “quality Guest experience”
Next: May Disney Merch We Are Swooning Over