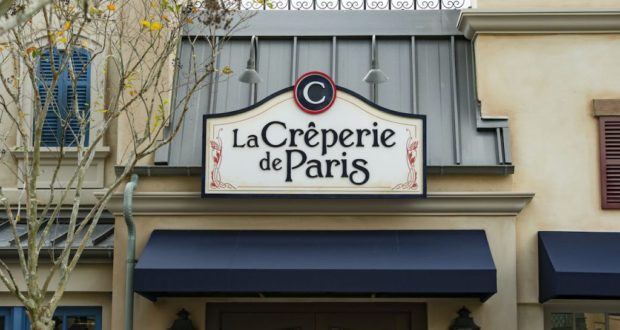 When you think of Walt Disney World’s 50th Anniversary, chances are your mind goes to Magic Kingdom Park. While yes, Magic Kingdom will be full of anniversary festivities beginning October 1, 2021 – EPCOT is not to be overlooked! EPCOT is the only Park that will be introducing a new nighttime spectacular, a new attraction, AND a new restaurant for Disney World’s 50th Anniversary. The new nighttime spectacular “Harmonious” will debut on October 1, EPCOT’s newest attraction, Remy’s Ratatouille Adventure will open, as well the newest restaurant in the newly expanded France pavilion called La Crêperie de Paris. Now, Disney is sharing an inside La Crêperie de Paris before their grand opening in time for the 50th Anniversary Celebration!

La Crêperie de Paris in EPCOT’s France Pavilion recently introduced their new delicious crepe menu and we’re already drooling over it. The table- and quick-service restaurant, where everything is made from scratch and to order, will serve savory buckwheat galettes and a selection of sweet dessert crepe, along with Brittany’s famous hard cider. Are you a sweet crepe or savory crepe fan? Ready to get your stomach growling? Disney Parks took to TikTok to share: “SNEAK PEEK! Of Le Crêperie de Paris opening Oct. 1!” with the enticing video below:

YUM! It all looks amazing! Disney has noted that like all galettes and crêpes from Brittany, La Crêperie de Paris will serve them very thin. The galettes will be cooked at a high temperature, allowing the outside to become crispy and crunchy, surrounding an irresistible array of fillings. The gluten-friendly savory galettes will be made with buckwheat imported exclusively from France and will feature classic fillings with some unique twists.

Curious about dining reservations? For now, reservations at this new restaurant won’t be needed to enjoy the amazing taste of France at La Crêperie de Paris. Table service dining will be available on a first-come, first-served basis for Guests. Quick service dining will be a usual order-and-go setting. Bon Appetit as you travel EPCOT’s World Showcase to experience this new restaurant, – La Crêperie de Paris!

2021-08-27
Jamie Sylvester
Previous: This is the way? The Mandalorian’ to be canceled after Season 3?
Next: Have a Knack for Holiday Decorating? Disney Is Hiring Decorators!