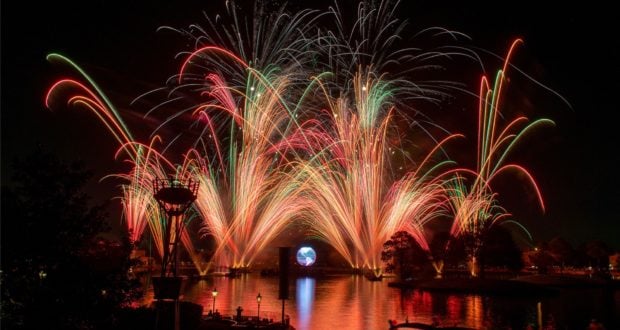 An EPCOT Illuminations Favorite Will Remain for Harmonious

The countdown continues for Walt Disney World’s 50th Anniversary, “The World’s Most Magical Celebration“. As we slowly inch closer and closer to October 1, we can’t help but take in each and every detail Disney dishes out. Soft openings for Remy’s Ratatouille Adventure, gorgeous 50th anniversary merchandise, “Disney Fab 50” sculpture reveals, and especially the new nighttime spectaculars have us beyond excited! While we will be saying goodbye to “Happily Ever After” at Magic Kingdom and hello to the new “Disney Enchantment“, we are also preparing for EPCOT’s new nighttime spectacular, “Harmonious“. Walt Disney Imagineer, Zach Riddley, took to social media to share one favorite part of the former Illuminations will remain for Harmonious!

Let us set the stage. Think back to Illuminations. As you stand around the World Showcase lagoon, an announcer says, “We’re gathered here tonight around the fire as people of all lands have gathered for thousands and thousands of years before us to share the light and to share a story. An amazing story as old as time itself, but still being written. And though each of us has our own individual stories to tell, a true adventure emerges when we bring them all together as one. We hope you enjoy our story tonight, Reflections of Earth.” Then for one of the best parts! You hear the announcer sound like he’s blown out a candle. The torches go out along with all the pavilion lights. It’s dark as you listen to the single drum beat which slowly begins escalating until… the center of the lagoon explodes with light!

As shared via Zach Riddley on Instagram: “Storytelling by firelight. These torches are fierce and a core part of the spectacular experience each night in World Showcase lagoon. These torches have played a role in Illuminations and EPCOT Forever. And I can confirm they will be part of our new show Harmonious coming Oct 1st!!”

Yes, the torches remain! It may seem like a small detail, but we love that Disney is keeping around this piece of Illuminations history. We can’t help but wonder how Disney plans to use them in the storytelling for “Harmonious”. Until Disney shares more, take a step back in time and reminisce over the Illuminations video below: