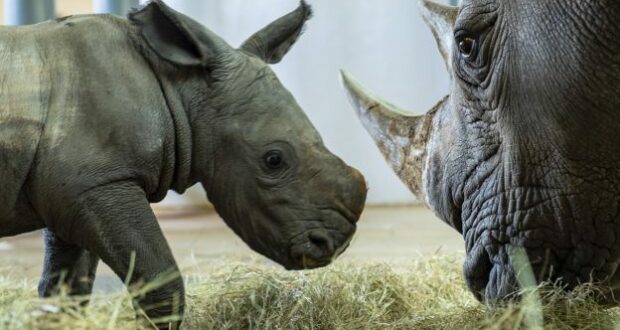 Need a dose of cuteness today? Well, look no further! Baby news coming out of Walt Disney World is some of our very favorite to share! From a new Nile hippopotamus calf named “Greta” to a Gorilla troop revealing the name of their new baby gorilla “Ada”, and even the sweet addition of a baby boy Hartmann’s mountain zebra foal… Disney’s Animal Kingdom Theme Park is experiencing a wonderful baby overload! We previously shared the exciting news that an adorable endangered species rhino calf was very recently born at Walt Disney World Resort. While we were able to share the single image below, Disney is now revealing a video of the little guy and more adorable photos that have us falling in love!

Disney Parks Blog provides an update of the new baby rhino: “While we give Jao and her baby boy ample time to bond, it will be a little while before we know the calf’s weight. Typically, white rhino calves can weigh as much as 140 pounds at birth. Did you know that the majestic rhinos are the world’s second-largest land animal? Rhinoceros also have one of the longest gestation periods of any mammal – approximately 16 to 18 months. Our animal care team’s veterinarians, scientists, and animal keepers kept a close eye on Jao throughout her pregnancy, conducting regular checkups and ultrasounds to ensure a safe birth.”

“Jao was paired with dad Dugan, the bull of the herd, through one of the Species Survival Plans, which are overseen by the Association of Zoos and Aquariums to ensure the responsible breeding of endangered species. This birth is a true milestone for this endangered species. And our herd continues to grow. This delivery marks the 12th rhino born at Disney and the second rhino born in the last year. And even more, hooves are on the horizon as another first-time mom, Lola is expected to give birth this fall. In the coming weeks, Jao and baby are expected to join the “crash” (a group of rhinos), in their habitat on the Harambe Wildlife Reserve where Disney Park Guests can catch a glimpse of the herd while aboard Kilimanjaro Safaris.”

As if those photos aren’t cute enough, check out this little guy in motion in the video Disney has shared below:

It sounds and looks like the little white rhino calf is doing very well! Hopefully, we’ll be learning a name for the little guy soon as well. We’re looking forward to taking a ride or two on the popular attraction, Kilimanjaro Safari at Disney’s Animal Kingdom to try to spot the new baby boy. Just ask your safari guide to help you spot the adorable newborn rhino once he joins the rhinoceros family on Kilimanjaro Safaris in the coming weeks!