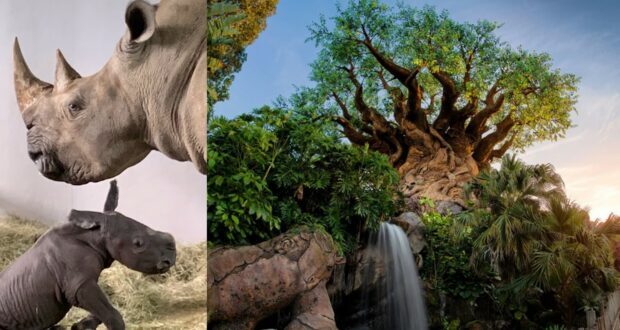 Excuse us while we fill your screen with cuteness. Exciting news coming out of Walt Disney World Resort… BABY news that is! We’ve seen what seems like a baby overload coming out of Disney’s Animal Kingdom Theme Park recently, and we’re loving every second of it. Recently, Disney welcomed a Nile hippopotamus calf which they have named “Greta.” Disney Cast Members recently let their Gorilla troop reveal the name of a new baby gorilla at Disney’s Animal Kingdom – “Ada.” We’ve even seen the sweet addition of a baby boy Hartmann’s mountain zebra foal. And now, we’re especially excited to learn an adorable endangered species rhino calf has JUST been born at Walt Disney World.

As shared via Disney’s Animals, Science and Environment Facebook on September 8 about the new baby white rhino: “BABY NEWS! Our team of animal care experts welcomed our newest baby animal to the family this morning – an adorable white rhino calf! White rhinos are endangered, so this birth is extra special for this incredible species. It’s important to give first-time mom Jao and her newborn ample time to nurse and bond backstage, so the calf’s sex and weight might not be known for some time. Check back soon for more photos of this adorable pair.”

So cute! Congrats to the first-time Mom, Jao, on her little white rhinoceros calf! While for now, the little one will remain with Mom inside, if you’re planning a visit to Disney’s Animal Kingdom in the near future, you’ll want to keep an eye out for this new addition to the Disney Park.

Take a ride or two on the popular attraction, Kilimanjaro Safari, to check out several amazing creatures. You’ll have a chance to explore the Harambe Wildlife Reserve which will soon be home to this baby rhino as well as 34 species on the 110 acres of picturesque open plains, shady forest landscapes, and rocky wetlands. Hopefully, your safari guide will help you spot the adorable newborn rhino once he or she joins the rhinoceros family on Kilimanjaro Safaris!