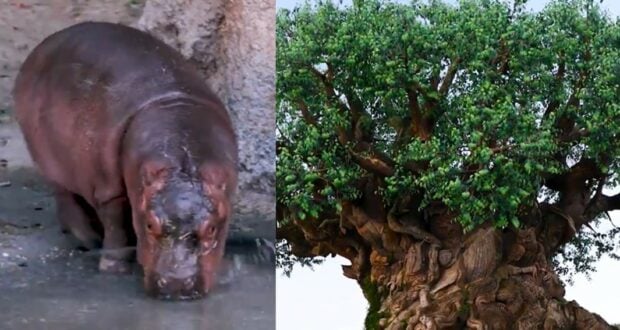 One of our very favorite pieces of Disney news to share is BABY news! Walt Disney World is serving up for more Disney baby news and we can’t get enough of the cuteness overload. In July, Disney’s Animal Kingdom welcomed a new baby hippo but had yet to name the little one. Now, Disney has revealed the name and a video of the active little cutie!

On July 12 Disney’s Animal Kingdom’s newest resident, a Nile hippopotamus calf, was born. Disney captured the first photo (above) of the little one popping up out of the water. At the time, the animal care experts were giving the calf plenty of room to bond and nurse with Mom. Look in the photo below at how she has grown!

Disney Parks took to Twitter to share the baby hippo’s name and a cute video of the little one in action: “Meet Greta! This little hippo with a big personality recently joined the Disney’s Animal Kingdom Theme Park family. Guests may catch a glimpse of her on Kilimanjaro Safaris.”

Congrats to Mom (Tuma) and Dad (Henry) on their little hippo calf – Greta! Are you planning a visit to Disney’s Animal Kingdom in the near future? If so, be sure to take a ride or two on Kilimanjaro Safaris to check out several amazing creatures. You’ll have a chance to explore the Harambe Wildlife Reserve which is home to baby Greta as well as 34 species on the 110 acres of picturesque open plains, shady forest landscapes, and rocky wetlands. Hopefully, your safari guide will help you spot the adorable hippo calf Greta and her hippo family!