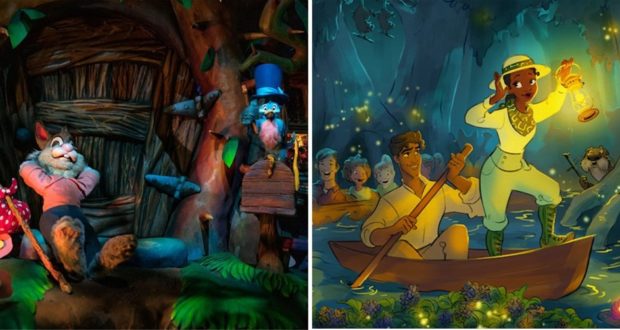 We previously shared the news that Splash Mountain at Magic Kingdom in Walt Disney World Resort and Disneyland Park is being rethemed to a Princess and The Frog theme. Today, to kick off their first-ever “World Princess Week“, Disney is sharing details about Princess Tiana and the attraction retheming including a back story and more artistic renderings of what’s to come for the Disney Park attraction.

When the news was first announced in June 2020, the response from Disney theme Park fans seemed to be a 50/50 split as many Disney fans wish the iconic Magic Kingdom Park attraction would remain the same, while others are all for the removal of the Song of the South elements. Fan petitions went out in favor of the attraction’s reimagining while another went against any changes. And after a year plus now, we haven’t heard much about the Splash Mountain ride retheming from Disney. Disney did share not too long ago that the attraction change is going to take a little time. Now, we’re learning more details as to what we can expect!

Disney Parks Blog shares, “As seen in this latest rendering of the attraction, the story will take place after the final kiss as Naveen and Louis join Princess Tiana on her latest adventure, hosting a one-of-a-kind Mardi Gras celebration where everyone is welcome – during which some original music inspired by songs from the film will bring Guests into the story. Tiana is leading the way and fans will be able to encounter old friends and make new ones along the way as well!”

Disney gathered together to talk about the creative process behind the upcoming Princess and the Frog attraction, including the next-level technology Imagineers are employing to bring the ride to life. Via YouTube Disney shares, “In celebration of World Princess Week, get the latest on the upcoming attraction inspired by “The Princess and the Frog” coming to Walt Disney World Resort and Disneyland Resort. Hear from Walt Disney Imagineering and Walt Disney Animation Studios during their visit to New Orleans at Dooky Chase’s Restaurant where Tiana’s story began!” (TIP: Around the 14-minute mark in the video, the attraction retheming is discussed!)

Unfortunately, we have yet to learn of a Splash Mountain retheming timeline. As soon as Disney reveals a timeline and/or more concept art, we’ll be sure to share more about the musical adventure coming to the attraction. In the meantime, Princess Tiana’s presence is also being acknowledged over at EPCOT with a new Tiana-themed playground. Are you ready to see Splash Mountain changed to The Princess and the Frog’s new theme?

2021-08-23
Jamie Sylvester
Previous: Another Disney Animatronic Malfunctions at Magic Kingdom
Next: Disney Adds DJ To Main Street, U.S.A. But Then Change Their Mind