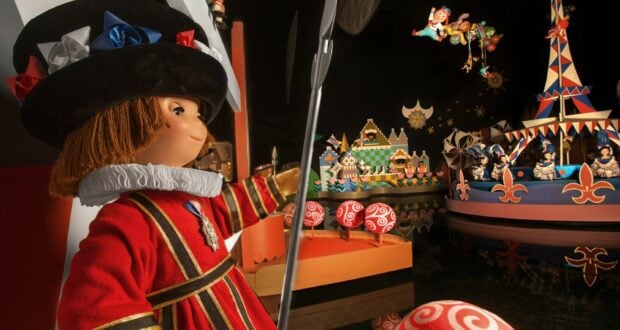 Ok, Disney fans. If you’ve ever been to Walt Disney World Resort or Disneyland Resort chances are you understand at least the core basic rules. One of these rules… keep your hands, arms, feet, and legs INSIDE the attraction vehicle at all times. In this case, one Disney Guest broke this most basic rule.

When you follow Disney bloggers closely, it’s not uncommon to see things posted that make you go, “WHAT?” For example, just recently, we shared an angry Guest having a total and complete meltdown over a Cast Member moving her stroller. We’ve also seen a young Guest decide to get out of a Splash Mountain boat. And let’s not forget about the woman that jumped out of the Living With the Land boat for a cucumber!

Over at Disneyland Resort, someone made the decision to stick their arm under the boat while on the nostalgic “it’s a small world” attraction. Take note that it has been deemed very dangerous to put any body parts below a moving Disney boat or vehicle. The attractions are sometimes on tracks and yes, you can lose a finger or more if you’re not careful. If you don’t hurt yourself under the boat, you could also get your arm crushed against the wall.

We aren’t sure if it was the “it’s a small world” song that got to this Disney Guest or just poor judgment, but @kellykoby took to TikTok to share a viral video. She notes, “It’s not that hard to follow the rules #disney #disneyland #wdw #disneyparks #itsasmallworld #nobigdeal #why”. The video now has over 44,00 views with comments to follow. Check out the video below or find it here:

Thankfully, the man continues to enjoy his Disney vacation and pulls his arm out without any problems. But, the comments on this video are as entertaining as one would expect.

One comment makes Little Mermaid jokes with, “His hand went under the sea” with another saying “He’s talking some Disney magic with him.” One commenter relates to the situation with “I’ve done that on pirates of the Caribbean and a lady came on the intercom I was cracking up and fully embarrassed.”

Think getting hurt isn’t possible on a Disney boat ride? One person notes, “a kid actually got his finger cut off on pirates of the caribbean from doing this… PLEASE DON’T DO THIS” with the response “some dumb teen got her finger ripped off on splash a few years ago. they never found it.”

Have you ever stuck your hand in the water on one of Disney Park’s boat attractions? Let us know in the comments.