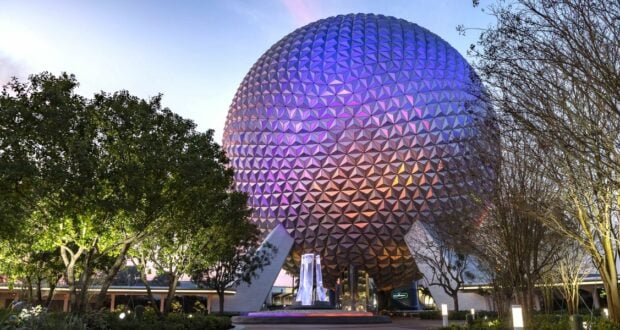 This Ugly EPCOT Addition Is Finally Being Removed!

Walt Disney World Resort has been dishing out exciting news as we roll through January 2023. And now, news that has seemingly made the entire Disney fandom happy… Disney has announced it is removing one of its greatest eye sores from EPCOT.

First up, big news is coming out of Magic Kingdom Park. Disney has recently teased clues to the long-awaited TRON Lightcylce / Run opening this Spring. As Disney fans try to decipher the clues, we are also excited to learn concrete dates for Magic Kingdom’s nighttime spectacular.

Disney Enchantment, the 50th Anniversary nighttime spectacular at Magic Kingdom, will officially end on April 2, 2023. The beloved Happily Ever After fireworks show will return on April 3, 2023.

Sadly, both Disney Enchantment at Magic Kingdom and Harmonious at EPCOT did not receive the warm welcome Disney intended. Magic Kingdom’s Enchantment lacked any signs of Walt, which Disney tried to correct, but it was too little too late. Additionally, EPCOT’s Harmonious was considered a lackluster show, despite Disney’s efforts with it being “one of the largest nighttime spectaculars ever created for Disney Parks.”

So, what exactly was the issue with EPCOT’s Harmonious? While some love the music and projections, many Disney fans said it simply couldn’t measure up to EPCOT’s long-standing Illuminations nighttime spectacular. Illuminations offered a 360-degree experience in the World Showcase Lagoon with the circular barge that would be moved in and out of the lagoon prior to the show.

When Harmonious debuted, Disney installed massive barges in the middle of the once-stunning World Showcase Lagoon. The barges are so huge and distracting that they were quickly deemed an eyesore for many fans. Plus, the large circle Harmonious barge took the former 360-degree Illuminations view and cut it in half, with the entire show only being able to be seen from the World Showcase entrance and the American Adventure Pavilion.

Disney promised the barges would be used as fountains during the day to help with the unimpressive look of the mechanics, but the fountains sometimes worked, sometimes didn’t… and yes, it was still an eyesore despite efforts.

Thankfully, it seems like Disney not only heard Disney fans, but they have announced the barges will be removed, stating, “Similar to how it appeared in 2021, “EPCOT Forever” is the perfect offering while our Entertainment team preps the Lagoon, including a phased removal of fireworks platforms following the final “Harmonious” performance on April 2.”

Additionally, @ScottGustin confirmed that yes, indeed, this means the Harmonious barges will be removed from the theme park:

Thank you, Disney! We’re thrilled to see the World Showcase Lagoon in EPCOT will return to its normal stunning location, with views and photos no longer being blocked by the massive Harmonious barges.