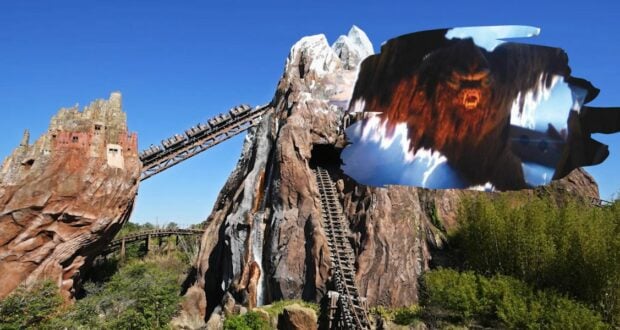 “Yeti or not, here he comes!” Disney’s infamous “Disco Yeti” has received an update as Disney seemingly attempts to bring the broken animatronic back to life. As seen in the video below… it’s better… but it’s, unfortunately, not fixed.

A visit to Walt Disney World Resort’s theme parks isn’t complete without a visit to Disney’s Animal Kingdom Park. Looming in the distance, Disney Park Guest will spot the impressive Expedition Everest – Legend of the Forbidden Mountain within the Asia portion of the Park.

RELATED: Why Are There Hair Scrunchies on Expedition Everest?

As the mountain towers over the Park, Disney fans rush to enjoy the thrilling roller coaster that takes Guests through the icy Himalayan peaks on a speeding train while avoiding the clutches of the mythic Yeti.

The popular and extremely expensive Disney attraction opened in 2006. The attraction featured a massive Yeti animatronic that reached for Guests as the train zoomed by.

Sadly for Disney Imagineers that worked so hard on this ride, shortly after the opening of the attraction, the Yeti’s framing split. The Yeti was broken and deemed a “threatening catastrophic malfunction.”

The Disney Park legendary Yeti on the Mount Everest coaster has since functioned on “Plan B.”

Disney Imagineers decide to add a strobe-light effect around the Yeti animatronic with the hopes of giving it the appearance of movement as the coaster train zooms by. This strobe effect is the reason the Yeti has been given the nickname “Disco Yeti.”

And while Disney has closed Expedition Everest for lengthy refurbishments in the past, they have never fixed the Yeti. BUT… it seems like they are trying to bring a little more life once again to the Yeti with new lighting.

@ThatDisneyBoi took to social media to share, “There’s a new light on Disco Yeti. This is not a drill.” Check out the video in the tweet below:

We personally rode Expedition Everest on December 3, 2022, and noticed the brighter new lights as well. The addition is a great one to highlight the Yeti in all his “Disco” glory.

While we may never see the Yeti fixed, we are thankful Disney is working to keep the experience a thrilling one for Disney Park Guests brave enough to ride Expedition Everest.