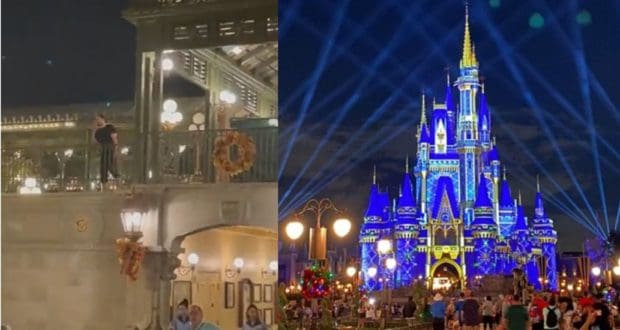 Disney Adds DJ To Main Street, U.S.A. But Then Change Their Mind

Walt Disney World Resort had a tremendously busy week as far as news goes. We learned that the new complimentary Disney Genie mobile app is on the way in which brought the not-so-popular news that the former free FastPass system is gone and instead Disney is charging for similar “Fastpass” systems called the Disney Genie+ and the Lightning Lane. On top of that news, Disney updated their mask policy, had to help a stranded monorail, and work on the Abraham Lincoln and Ariel animatronic malfunctions. SO – all in all, it wasn’t the grandest of weeks for Disney. As the week came to an end, Disney tried to introduce another newbie to Magic Kingdom Park on Main Street, U.S.A. This addition was met with much of the same “WHAT??” reaction we had been seeing all week. That’s right, Disney added a DJ to close out the night at the most magical place on earth.

You’ll see in several Tweets below from Disney fans capturing the DJ closing down the night at Magic Kingdom Park. The DJ was spirited and acknowledge Guests, as well as played a few songs to send Disney Guests home:

Here’s another video from the weekend of the Magic Kingdom DJ:

Would you want to hear a DJ as you exit Magic Kingdom or do you prefer to leave with the night with the fireworks as a send-off?

Twitter went crazy over the DJ news. We have yet to read a single post or tweet of someone saying they actually liked the DJ being on Main Street, U.S.A. Instead, we’re hearing more and more tweets asking what was Disney thinking?

We’re with the tweet below, as we too feel bad for the DJ! It’s not that Disney fans are saying he’s a bad DJ – they are simply saying a DJ doesn’t belong on Main Street, U.S.A.

Disney fans are now reporting that the DJ was removed last night (August 22). Reportedly, he was all set up and ready to go to close out Sunday night at Magic Kingdom, but was then removed. Do you suppose Disney heard the complaints hitting social media and decided to pull the DJ from Main Street, U.S.A. Train Station?

Time will tell if the DJ is truly gone for good, as we’re curious to see if the DJ makes a return tonight. DJs aren’t completely new to the parks (or Disney Springs) as we’ve seen DJs in Tomorrowland for the occasional after-hours event. Maybe instead of having a DJ close out the popular Disney Park, a Disney Character or two could be waving from up above? We’ll keep you posted if Disney decides to bring the DJ back tonight!