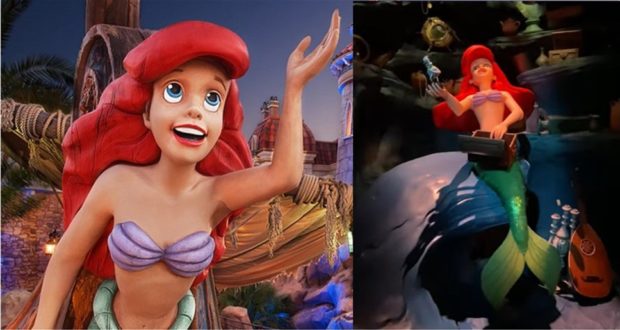 Last week seemed to be an oddly off week for Disney. On Wednesday, we all learned of the new Disney Genie program coming to Walt Disney World Resort and Disneyland Resort. While the complimentary mobile app portion of Disney Genie doesn’t seem to be a problem for many, Disney fans are unhappy that soon we will have to pay for the new “FastPass” program called “Disney Genie+” and “Lightning Lanes”. Disney fans are unhappy and are showing it in waves of dislikes and upset comments. Last week we also shared the news that the Orange Monorail on the way to Magic Kingdom Park lost power and left monorail riders stranded. It was also reported that Abraham Lincoln at The Hall of Presidents malfunctioned. And now, even The Little Mermaid is acting up! A YouTuber captured a video as the Disney Ariel malfunctions at Magic Kingdom.

Under the Sea – Journey of the Little Mermaid is a beloved ride at Magic Kingdom Park that our family is always sure to experience. It’s relaxing, air-conditioned, and who doesn’t like singing along to all their favorite Little Mermaid songs! As Disney puts it, “Revisit the classic “tail” of how one lucky little mermaid found true love… and legs.” Well, instead of hunching over like Abraham Lincoln’s malfunction, the Ariel animatronic seems to just be leaning back!

AllCentralFlorida was in the Disney Park and shared on YouTube: “Under the Sea: Journey of the Little Mermaid Animatronic Malfunctioning 8/20/21” with the brief video below:

In the words of Ursula, “Poor unfortunate soul!” Yes, even in the Disney bubble hiccups do occur. With multiple Walt Disney World Cast Members working as mechanics, it’s nice to know Disney gets the attraction animatronic up and running before King Triton has to step in! We also know Disney is hard at work to improve and create new robots/animatronics for the near future. Do you have a story to share about an animatronic malfunction you’ve seen unfold while visiting Walt Disney World?