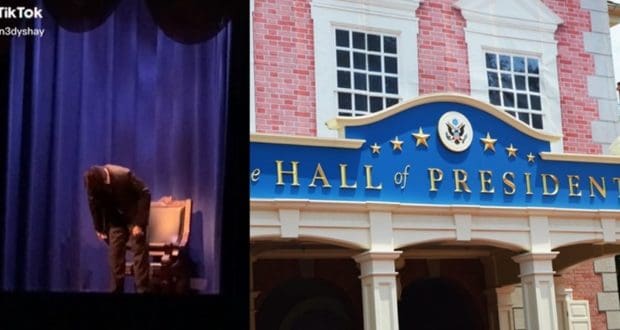 Abraham Lincoln Animatronic Malfunctions at The Hall of Presidents

Have you ever visited one of Walt Disney World’s attractions only to find a hiccup in the ride experience? Even though we like to think there is this magical bubble around Disney property, mistakes and mishaps unfold. Just recently we shared the news that the Orange Monorail on the way to Magic Kingdom Park lost power and left monorail riders stranded. Now, a video is going viral that shows Disney Abraham Lincoln animatronic during his great moment of speaking not having the best of days at The Hall of Presidents.

President Abraham Lincoln! We appreciate the laughter from Kennedy Shay! Rather than get upset about the mishap, we love to see when people laugh it off and move on. Disney’s Imagineers must have fixed “Sleepy Abe” quickly because the Lincoln figure is back up and running and the attraction is welcoming Guests once again! Do you have a story to share about an animatronic malfunction you’ve seen unfold while visiting Walt Disney World?