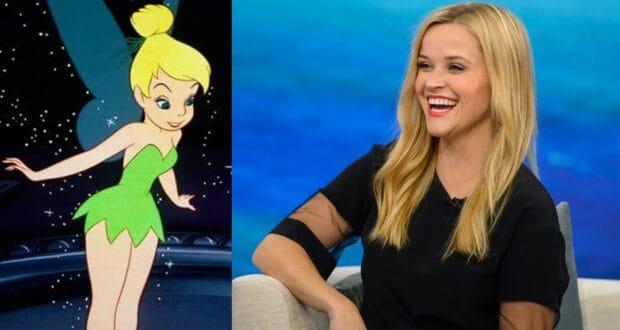 Ok, Disney fans – we’re off to Neverland! This can be confusing, but if you’re a Peter Pan and/or Tinker Bell fan, you’ll want to listen in. By now you may have heard about the news that a “Peter Pan & Wendy” film is scheduled to arrive on Disney Plus in 2022. This new Disney film features Yara Shahidi as Tinker Bell. Well, before “Peter Pan & Wendy” was in development, there was already another version of the Peter Pan classic novel in the works. Disney was working on Peter Pan’s story told from the perspective of Tinker Bell. The title…”Tink”. Now, after much silence, we’re hearing a few more details about Disney’s Tink which will be a live action film with possibly Reese Witherspoon as Tinker Bell The film is still alive after all and in the very early stages of development.

TheDisInsider reported a bit of pixie dust as they shared an exclusive report saying: “In a new production sheet that we’ve managed to get our hands-on, it’s revealed that the project was recently been assigned a new writer within the last year or so. Currently, Maria Melnik is listed as the scribe. She’s probably most known for her work on both Escape Room films and American Gods. On top of that proof that the project still has a pulse, the sheet also features several incredibly detailed character breakdowns. In addition to giving us insight into what other characters the story will center on, they also do a fantastic job of framing the planned plot for the film. For example, Tinkerbell’s character breakdown not only describes her and her association to Peter Pan but indicates that the story will explore her relationship prior to Peter meeting Wendy.”

The unofficial synopsis of the Tinker Bell movie states that “after Peter becomes gravely injured, “Tink” makes a deal with the head fairy (named Variel Tarin) to save his life. This results in Peter staying a 9-year-old forever and her losing her voice. The story doesn’t end there though. After Peter meets Wendy, Tink becomes incredibly jealous. However, when Hook kidnaps Peter she and Wendy must team up to save him before it’s too late.” That sounds SUPER interesting! Peter Pan and the Lost Boys will also have a role. And yes, the classic Peter Pan character, Captain Hook is suspected to be part of the live action Disney movie as well.

How is Reese Witherspoon involved in the Tinker Bell tale? Witherspoon is still attached as the film’s producer, though it’s not made entirely clear if she still plans to star as Tinkerbell.

Do you think this live action Disney film called “Tink” will be a project that makes it to the big screen? The DisInsider believes that since the project has gotten a new writer after over 5 years of inactivity, that is a good sign for the film to come to fruition. We’ll keep you posted as we learn more about what’s to come for “Tink”!