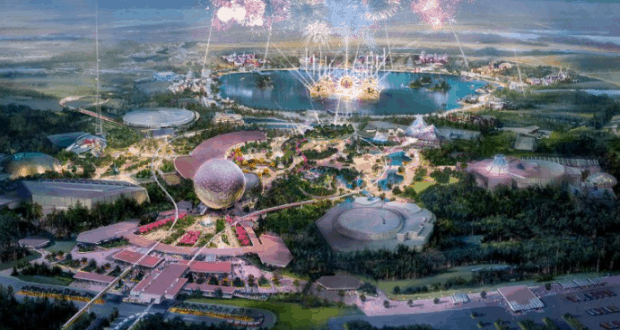 Missed Day One and/or Day Two of the D23 Expo? Click here!

One of the most exciting panels at each D23 Expo is the one that features Disney Parks and Resorts. This year it was called Sneak Peek! Disney Parks, Experiences and Products, and it was packed full of information.

One of the most anticipated bits of news was what is happening with the transformation of Epcot. The legendary (and Disney Legend) Dick Van Dyke was on hand to help with a major announcement. Cherry Tree Lane is coming to World Showcase! The announcement was a little bit confusing, because it was referred to as both an attraction and a pavilion. I later learned that Cherry Tree Lane is going to be part of the United Kingdom Pavilion.

France will also take part in the transformation. Remy’s Ratatouille Adventure (announced at the last D23 Expo) will open summer 2020. France is also getting a new restaurant called La Creperie de Paris. Finally as far as France is concerned is a new film. It will be called Beauty and the Beast Sing-Along, and it will not replace Impressions de France.

Canada will have a new film called Canada Far and Wide in Circle-Vision 360, which will debut in January 2020. Another 360 degree film is coming to China, called Wonderous China.

World Celebration: There was news about Spaceship Earth. Don’t worry, it will remain the park’s icon. It will undergo a lengthy refurbishment, in which it will be given new narration and new stories. Some of the current scenes will remain, and there will be new scenes as well. Once it is over, guests will exit to Dreamers Point. There will also be a new statue of Walt Disney. Spaceship Earth will be part of the new neighborhood called World Celebration, which will also feature a new pavilion that will be the home base for Epcot’s festival.

World Nature: Also at Epcot will be World Nature. This new neighborhood will feature Journey of Water, Inspired by Moana, and Awesome Planet.

One more bit of information was released about Epcot. We already knew that IllumiNations would end on September 30, and would be replaced by Epcot Forever. That show is just temporary. The permanent nighttime show will be called HarmonioUS, and it will debut in 2020.

We also heard quite a bit about Star Wars: Galactic Starcruiser, which is the hotel that is going to be located outside of Disney’s Hollywood Studios. It will be a two-night adventure, and it will be similar to taking a cruise. You will be able to creature your own Star Wars story. It will include lightsaber training, a trip to the bridge, plenty of character encounters, and possibly some interactions with both the First Order and the Resistance.

Those were some of the major announcements that were released during the panel. There was plenty of other news, including information on a new Disneyland parade, Avengers Campus, and Disney Parks around the world. We also learned that the next ship for Disney Cruise Line will be called the Disney Wish. Click here to learn more about the announcements outside of the Walt Disney World Resort.

Another fun panel that we attended on the final day of D23 Expo was The Art of Disney Storytelling. This was hosted by John Stamos and his wife Caitlin McHugh Stamos. John Stamos never ages! In the panel, we got to hear from Disney Legends Tony Baxter and Floyd Norman. We also learned from Paul Briggs and Don Hahn. We learned about their careers, and also what it takes to create and tell a story that will appeal to the masses. The information had to do with rides and songs, as well as movies. One interesting piece of information that we learned was that Walt Disney was the first one to use storyboards. They have since become an industry standard for movies, television shows, and even rides.

The final large panel of the 2019 D23 Expo was Disney Character Voices, Inc.; 30th Anniversary Celebration. This panel featured some of Disney’s finest voice actors and talent. The panel started with a bit of a history lesson. When Walt Disney voiced Mickey Mouse, he became the very first voice actor. We saw rare footage of Walt recording as Mickey.

In the early days, there were several different actors who would perform a voice, depending on the role. That was what the 30th Anniversary part of the panel was all about. In 1989, it was decided that there needed to be one main person who would voice a role. It was quite the task to find the right actors. We watched at tribute to the late Russi Taylor, who was the voice of Minnie Mouse, and who recently passed. She had been married to Wayne Allwine, who was the voice of Mickey until his death in 2009. Theirs was a real Mickey and Minnie Mouse love story.

We also were treated to appearances by current Disney voice talent, including Bill Farmer, who has voiced Goofy and Pluto for over 30 years. Bret Iwan (Mickey Mouse), Tony Anselmo (Donald Duck), and Jim Cummings (Winnie the Pooh and Tigger) were all there. There was a skit with where they performed some of their famous voices, and a couple of audience members helped.

We were also treated to some princesses who are also Disney Legends. Anika Noni Rose (Tiana), Jodi Benson (Ariel), Linda Larkin (Jasmine), and Paige O’Hara (Belle) all shared stories of how much their characters have changed their own lives, the lives of others, and what it means to be a Disney Legend. O’Hara, who is also an artist, presented the other three women with portraits that she had created of their characters. It was a touching moment.

As the 2019 D23 Expo wound down, my daughter and I decided to go through Disney Team of Heroes one more time. We learned that all of the bags had been filled and their goal had been met! We were invited to decorate cards for the children, which we gladly did. It seemed like the perfect way to end the weekend. My daughter and I had a great time, and we are already looking forward to the next D23 Expo in 2021!