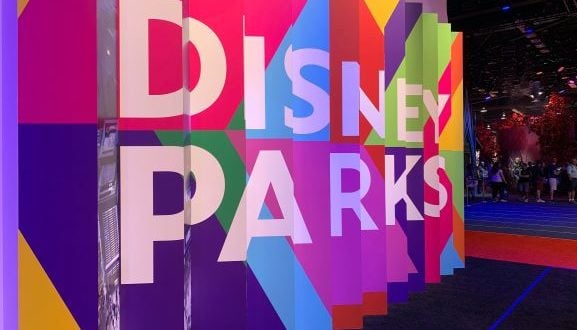 Did you miss Day One of the D23 Expo? Click here!

The major panel at the second day of the D23 Expo was called Go Behind the Scenes with The Walt Disney Studios. The panel gives those who attend a sneak peek at upcoming projects. Filming and pictures are not allowed at the panel. This year, the final installment of the Skywalker Saga (Star Wars) was well represented. Lucasfilm President Kathleen Kennedy was on hand, along with The Rise of Skywalker writer and director J.J. Abrams. Cast members who appeared included Daisy Ridley, John Boyega, Oscar Isaac, Anthony Daniels, and Billy Dee Williams. Also appearing were R2-D2, BB-8, and the new droid D-O. The movie’s poster was revealed, and given out to members of the audience.

Marvel was also represented. There was talk about the sequel to the highly successful Black Panther, which will be released on May 6, 2022. There was also information on The Eternals and Black Widow.

Disney live action was also a part of the panel. Dwayne Johnson introduced the trailer for The Jungle Cruise. Angelina Jolie was also on hand, with footage and details about Maleficent: Mistress of Evil. The audience also learned more about the upcoming Mulan and Cruella features. These were just a few of the highlights of the popular panel.

My daughter and I also attended Making Holiday Magic at Disney Parks. This featured the authors of the upcoming book of the same name. It was an interesting panel, filled with history and lots of gorgeous pictures from holidays across the Disney Parks, Disney Cruise Line, and Disney Vacation Club. The first part of the panel was history, dating back to the early days at Disneyland. Did you know that the park at one time celebrated Zorro Days? We were treated to some rare video footage (without sound) that showed the celebration. After the history aspect we learned more about Halloween across Disney, and then Christmas. If the book is as interesting as the presentation I will definitely want a copy once it comes out.

Today we also spent some time on the show floor. We got to see concept art from different projects at various Disney Parks, from Walt Disney World to Tokyo. We also explored the exhibit for Avengers Academy. Once again, we decided to fill bags for Disney Team of Heroes. It’s fun to know that the items that we put into the bags might put a smile on a sick child’s face.

The other panel that we attended today was Immersive Worlds: Bringing Stories to Life in Disney Parks. I misunderstood what this panel was about, and I’m glad that I did. I thought it was going to be information about what it takes to create a ride based on a movie, such as Frozen Ever After at Epcot. Instead, the four panelists talked about what it takes to create an immersive environment.

The panelists were Joe Rohde, Jeanette Lomboy, Luc Mayrand, and Scott Trowbridge. Rohde shared with us details about bringing Pandora to life at Disney’s Animal Kingdom. He also was the moderator. Lomboy shared with us details about Aulani. She told us how they wanted to stay away from the Hawaiian stereotypes, and instead create an authentic Hawaiian experience. She also said that Mickey and Minnie are also on vacation. Mayrand talked about what it took to bring Treasure Cove to life in Shanghai. He said that part of the challenge was that there was some truth to the land, since pirates were once real. Trowbridge has been one of the driving forces behind Galaxy’s Edge on both coasts. He shared how important it is that guests become part of the story. He also told us that they had thought about, and discarded plans for different types of restrooms in the new lands. They decided to go traditional instead. He and Rohde both talked about how their new lands are so immersive that they use not only the land, but also the sky.

The final day of the D23 Expo is Sunday, August 25. That is when the Disney Parks panel will take place. We’ve already been promised a major announcement for Epcot, and we are sure to learn many exciting things that are to come. I can’t wait.