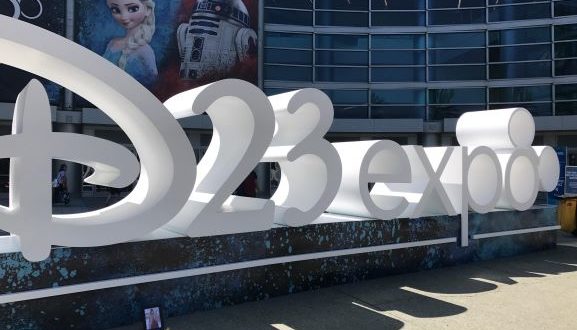 The first day of the D23 Expo is in the books! The bi-annual convention for all things Disney is held at the Anaheim Convention Center. This is the sixth time that it has taken place. My daughter and I are here, trying our best to cover the convention and take it all in.

The day started off with the 2019 Disney Legends Ceremony. This is kind of like the Disney Hall of Fame. There were 12 new Disney Legends this year, and they covered the spectrum of what Disney is all about. Bob Iger was the host. The new Disney Legends are Christina Aguilera (who started the ceremony by singing Reflections), Wing T. Chao, Robert Downey Jr., Jon Favreau, James Earl Jones, Bette Midler, Kenny Ortega, Barnette Ricci, Robin Roberts, Diane Sawyer, Ming-Na Wen, and Hans Zimmer. Jones and Zimmer were unable to attend, but both sent in a video, thanking Disney and their fans. Bette Midler couldn’t make it at the last minute because of weather, so her daughter Sophie accepted on her behalf, reading the speech that Midler had written.

The next panel that we attended was The Music of Star Wars: Galaxy’s Edge. The panel started with a lot of talk about John Williams and the music that he created for the new land. Williams could not attend because on Saturday he is conducting the Boston Pops at Tanglewood in Lenox, Massachusetts. Next the discussion turned to the sound effects that you will hear in Galaxy’s Edge. Whether it is an X-wing flying overhead of a radio commercial for Wookie Shampoo, there are background noises that fit right in, but that the average guest will not notice. Finally, they talked about the music inside Oga’s Cantina. They needed a variety of songs for Rex (the pilot turned DJ) to spin. It was an interesting challenge, because they wanted the songs written in alien languages. We were treated to a performance by Judith Hill and her band, it was the song that you can also hear in Oga’s. We were told that the songs that Rex plays will soon be available for sale.

We also attended the Vader Immortal: A Star Wars VR Series – Episode II First Look. We were treated to several pieces of concept art. We also watched a couple of videos from the new game, but we were not allowed to record them. At this time they are not sure when Episode II of Vader Immortal will be released, but they promised that it will be worth the wait.

There was also some interesting news released on Friday about Disney+. We learned Hillary Duff will reprise her role as Lizzie McGuire. This time she will be all grown up and living in NYC. We also heard more details about the upcoming Marvel series that will be available on the streaming service. The new trailer for the live action Star Wars series The Mandalorian was shown. There has been a rumor floating around that Ewan McGregor would reprise his role as Obi-Wan Kenobi in another new Star Wars series. That rumor was confirmed, by McGregor himself.

Visiting the show floor is part of the excitement of the D23 Expo. We spend a good amount of time at an exhibit called Beneath the Blue with National Geographic. In it, we learned about the damage that single use plastics are doing to our oceans. See our live stream on our Facebook page!

Another exhibit that we visited today was Disney Team of Heroes. During this exhibit, we learned about Disney’s efforts to help make hospital stays less scary for sick children. At the end, we put together goodie bags that will go directly to the kids. One Cast Member told me that it was the goal to assemble 6,000 bags by the end of the day.

Those were some of the highlights of the first day of the D23 Expo. We will be at it bright and early once again on Saturday.