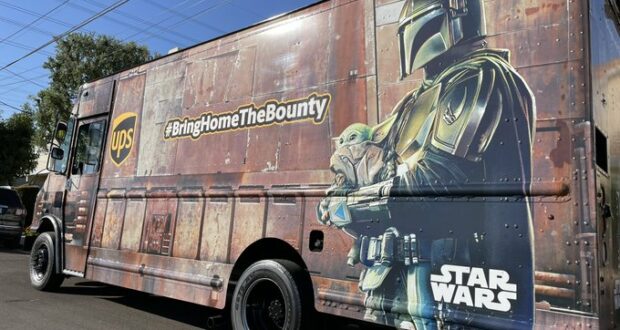 UPS is encouraging people to “bring home the bounty” this holiday season with new Star Wars-inspired wraps for their delivery trucks.

The new Star Wars-inspired wrappers feature a dark brown, worn look to them and look very much like the Sandcrawler vehicles driven by the Jawas in the original first installment of the Star Wars saga, the Star Wars film from 1977.

This guy isn’t a Jawa, and we don’t know if this is part of the new “bounty” campaign or he’s just really into his job (and presumably Star Wars), but he hands the package to its recipient and says, “Enjoy your bounty, and may the Force be with you.”

But THIS driver was fantastic and we had a great convo about #StarWars @TheBadBatch! #BringHomeTheBounty @UPS @starwars pic.twitter.com/5VQJ928ecG

Super cool delivery boxes too! We don’t even care what’s inside!

It’s also unclear where you have to live to get to see one of the “Bounty” UPS delivery trucks. According to ComicBook.com, the new truck wrappers rolled out this month in New York, but we aren’t sure where else the Star Wars Sandcrawler-esque trucks will pop up:

“Some lucky fans get to see their local deliveries coming in a UPS truck that looks like a Sandcrawler–the giant, brownish vehicles driven by the Jawas in the original Star Wars film in 1977. The art is themed to The Mandalorian, and the side of the truck features Mando and Grogu with the hashtag #BringHomeTheBounty. On the back of the trucks, you can see R2-D2, C-3PO, and a Jawa.”

UPS tweeted about the new wrappers, saying they are “traveling in Tatooine style” with the new trucks. Watch as the delivery truck gets dressed in its Star Wars best:

We’re traveling in Tatooine style with our new Sandcrawler inspired look. Check out the crew getting ready for this special galactic launch. #BringHomeTheBounty #StarWars pic.twitter.com/3gFHgAmJ7Y

We’re wondering how many fans are going to start ordering things, simply to try their luck at having a Sandcrawler-inspired UPS truck pull up in front of their houses this holiday season.

It was FATE that Duel of the Fates was playing as the truck pulled up. #StarWars #BringHomeTheBounty @UPS @starwars pic.twitter.com/n7pRIj0HZs

What do you think about the new wrappers? Have you seen any of these trucks in your area? Let us know and show us your photos if you have! 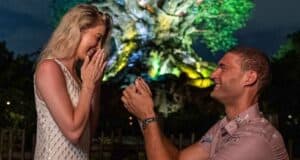