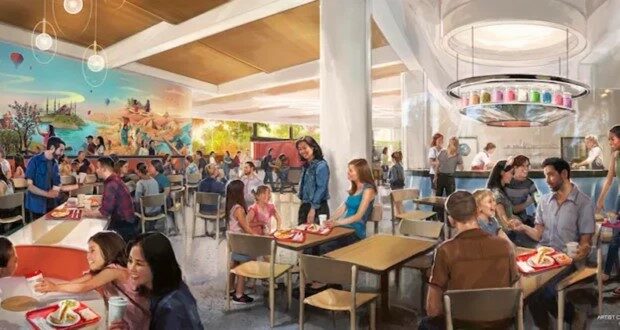 The Destination D23 Celebration is in full swing at the Walt Disney World Resort this weekend, and lots of exciting parks news is being shared with fans from all over the globe.

One of the exciting announcements made today was that of the name of a new quick-service restaurant at EPCOT. The quick-service eatery will function like other quick-service locations throughout the Walt Disney World Resort, where Guests can order at a counter or use the My Disney Experience app to place a mobile order from their phones for quicker pick-up at the eatery.

The announcement was made by Disney’s Josh D’Amaro, who currently works as Disney’s top man overseeing its Parks, Products, and Experiences. (Sounds like the most exciting position within The Walt Disney Company to me!)

The all-new Connections Café and Eatery will be located in the World Discovery neighborhood at EPCOT. It’s just one of the many changes coming to Disney World’s second park, which opened on October 1, 1982.

EPCOT was originally divided into two sections: Future World and the World Showcase. After the park’s transformation is complete, EPCOT will feature four distinct areas, each one full of new experiences, attractions, rides, and more magic than ever before. The four sections, or neighborhoods within EPCOT are World Showcase, World Celebration, World Nature, and World Discovery.

The new neighborhoods were first announced at the 2019 D23 Expo in California, along with the announcement of a new Moana-themed ride that will be located near the front of the park.

Big changes have been taking place all over the park as Disney’s Imagineers re-imagine the retro-futuristic park that also has a focus on cultural cuisine, traditions, and customs. We can’t wait to see all that’s in store for Guests who visit EPCOT in the coming years. We kind of think of it as an “EPCOT 2.0,” and it’s very exciting!

2021-11-20
+Becky Burkett
Previous: BREAKING: Disney puts the breaks on vaccine mandates after Gov. DeSantis signs new anti-mandate bills into law
Next: What You Need to Know About Remy’s Ratatouille Adventure