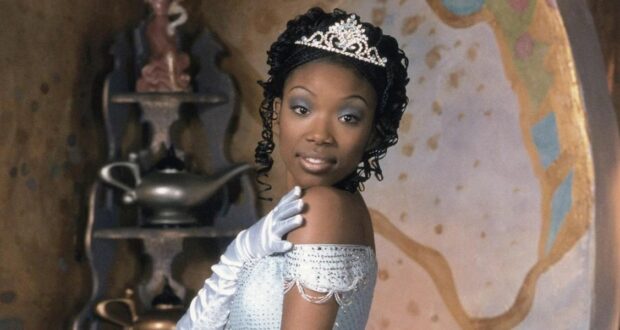 25 years ago, The Walt Disney Company broke casting barriers when they cast singing superstar Brandy to play the classic princess Cinderella. Rodger’s and Hammerstein’s Cinderella didn’t stop there with its diverse casting. Prince Christopher was played by Paolo Montalban, and his parents, the King and Queen, were played by Victor Garber and Whoopi Goldberg. The late Whitney Houston played the Fairy Godmother.

The film was not released in theaters — it was released on ABC as a special — but it immediately became a cult classic.

There have been several Cinderella movies made since 1997, but none of them are as beloved as Brandy’s classic tale. And now, we are learning that the singer will be donning the classic blue ballgown once again.

According to a report from Variety, Brandy is set to play Cinderella in Disney’s new Descendants film, The Pocketwatch:

The singer and actor, whose most lauded screen performance was her turn as the humble princess in the 1997 Disney TV movie “Rogers and Hammerstein’s Cinderella,” will play Cinderella again in the upcoming Disney+ film “The Pocketwatch.”

The movie musical takes place in the universe of the popular “The Descendants” franchise. Kylie Cantrall stars as Red, the rebellious teenage daughter of the Queen of Hearts, opposite Mia Baker as Chloe, the cheerful but naive daughter of Cinderella and Prince Charming. They cross paths at a momentous celebration in the kingdom of Auradon when unexpected chaos breaks out. In order to prevent an impending coup, they must join forces to travel back in time, via a magical pocket watch created by the Mad Hatter’s son, to stop an event that would lead to grave consequences. We also know that China Anne McClain will be returning as Uma, the daughter of the sea witch Ursula and Melanie Paxson will be returning to the role of the Fairy Godmother. It has not been announced if Paolo Montalban will be back to reprise his role as Prince Christopher. Ruby Rose Turner will play Bridget / the young Queen of Hearts, Joshua Colley will play the role of Hook, and Rita Ora will play the adult Queen of Hearts.

At this time, we don’t know when The Pocketwatch will be released, but it is almost certain that it will not be released in theaters, just on Disney+, like the first four films in The Descendants franchise.

2022-11-29
Krysten Swensen
Previous: The Disney Company Paid Bob Chapek THIS MUCH to Get Out and Never Return
Next: Disney On Broadway at EPCOT Is Returning! Here’s the Full Lineup