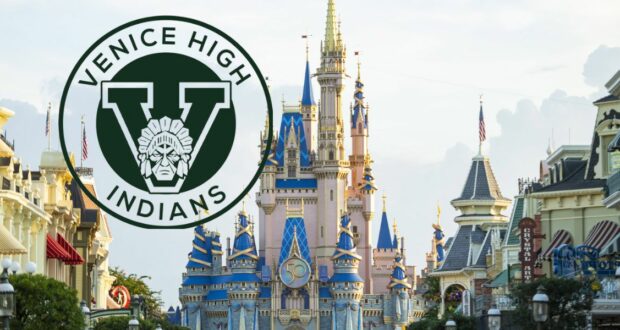 News is spreading quickly of a Florida High School Marching Band being rejected by Walt Disney World Resort due to its mascot. The band’s performance may be banned from the Disney Park… but that’s not stopping the students from visiting as Park Guests.

As we previously shared, the “Venice High School Marching Indians” were asked by Disney to cover the Native American school logo on their band uniforms to be allowed to participate in the marching performance.

The Disney fandom may remember back to earlier this year (March 2022), when a high school marching band and its color guard performed what some deemed as “racism” with an Indian music and dance chant down Main Street, U.S.A., as shown in the video below:

Fast forward to November 2022, and we suspect Walt Disney World Resort is attempting to prevent a similar backlash that took place in March. But, instead, the news is fast spreading, with many believing that asking a marching band to cover its Native American mascot is wrong.

While Venice High School Marching Indians are not able to perform on November 12, 2022, they will still be visiting Magic Kingdom Park.

Furthermore, the band’s Facebook page announced “Show Shirts” are required to be worn by students in the Park, which will likely have the high school’s Native American mascot image displayed.

As always, we will be sure to keep readers updated as we learn more about this developing theme park story.

2022-11-07
Jamie Sylvester
Previous: DinoLand U. S. A. Spot at Disney’s Animal Kingdom is Now Totally Extinct, Gone Forever
Next: Underdog No More! In the Theme Park Wars Universal Has Come to Win