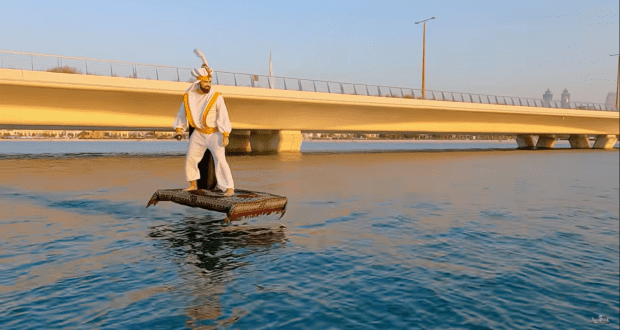 Aladdin in real life: You might be a Disney fan, but you’ll never be this level of Disney fan

You know who you are. 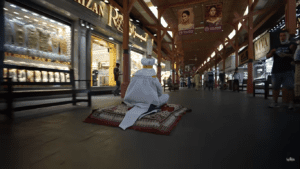 He took to Instagram to share that he had an idea for creating content that featured him as a real-life Aladdin, complete with the flying carpet and that the idea had been “brewing” in his obviously creative mind for about eight months.

And on Halloween this year, his imagination took flight–and so did he, thanks to his magic carpet. The video below is the finished product.

@RhyzOrDie rides his magic carpet through the streets of Dubai, through a marketplace in the city, and even out on open water. The gorgeous Burj Kalifa stands at attention in the background. 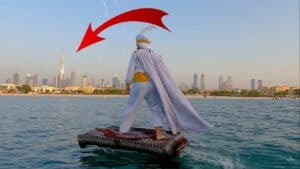 And then there are those beautiful sunset videos. It’s amazing. 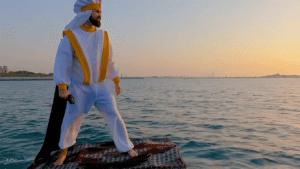 His idea became a reality thanks to some PVC pipes, an awesome cameraman, a hoverboard, and some really amazing movie magic. Is it PhotoShop of After Effects? We don’t know, and we’re not sure we want to know. Just let us have our magical moment.

But if you’re one of those people for whom the question, “How’d they do that?” will eat you alive until you find out, worry and fret no more. Here’s the follow-up video which shows in detail how the video was made, the actual training the star had to undergo to prep himself for the video, and how the special effects were achieved.  You can even meet the costume designers who created this Aladdin’s crazy accurate costume.

But if you watch it, don’t tell us everything about how it was made. Again, we’re happy over here in our magic!

All photos and videos are credited @RhyzOrDie.