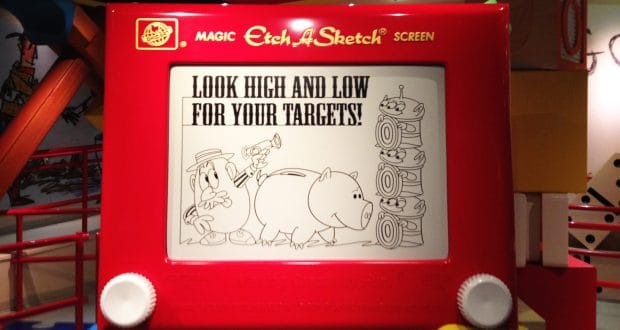 Of the four theme parks in Walt Disney World, many guests love to spend time in Disney’s Hollywood Studios thanks to its unique theme, wonderful attractions, and more. The park brings the glitz and glamour of Hollywood to life through wonderful attractions, dining, entertainment, shopping, and more that bring television and film to life. Guests who spend time in the park can learn all about stunt work with Indiana Jones, travel to The Twilight Zone, rock out with Aerosmith, blast off into the Star Wars universe, and sing along with favorite characters from Frozen. One of the most popular attractions in Disney’s Hollywood Studios can be found in the Pixar Place area of the park and it brings the popular Pixar series Toy Story to life. Toy Story Mania is an incredibly popular attraction with guests as it allows them to tap into their competitive side in a fun and entertaining way. Let’s check out eight totally cool things about Toy Story Mania in Disney’s Hollywood Studios.

As soon as guests pass through the entrance of Toy Story Mania, they might notice that they are suddenly surrounded by larger than life toys. That is because guests magically shrink down to the size of toys to be a part of Woody and Buzz’s gang of friends. By being so miniature, guests can check out massive versions of childhood favorite toys including crayons, Chutes and Ladders, Lincoln Logs, and more.

One portion of the queue has guests move through switchbacks past a wall that is painted to look like a sticker play set where guests could stick and re-stick favorite characters onto a set background. This wall did not used to exist at Toy Story Mania, in fact it used to be home to a stage where Mr. Potato Head was standing acting as a barker. Mr. Potato Head was one of the most advanced audio-animatronics ever made and would interact with guests in real time and even remove his ear! Sadly, Mr. Potato Head was removed when the third track was added to Toy Story Mania.

After boarding their attraction vehicles, guests should be on the lookout for a large archway that they pass underneath before the game begins. On the bottom of the archway is a barcode that might look like a random detail, but actually pays homage to the history of the attraction! The barcode features the numbers 121506 which references December 15th, 2006 which was the date that the attraction was announced!

Also found in the loading area is a great detail that honors the man who came up with the concept of Toy Story. Guests should be on the lookout for several book spines that are lined up along one wall. One of the books is titled Tin Toy and the author is credited as Lasseter. This references current head of Pixar John Lasseter who came up with the idea for Tin Toy, a story about a toy coming to life. This story was the precedent to Toy Story and this small detail is right at home at this attraction.

After disembarking their attractions vehicles, guests can spot another reference to John Lasseter and Tin Toy. Just before turning to walk down the exit ramp, guests should be on the lookout for a larger than life Little Golden Book with the Tin Toy on the cover. The massive prop allows guests to have an actual glimpse of what the original Tin Toy looked like and further appreciate how it developed into Toy Story.

Guests who can spot a quick glimpse of the back of the Little Golden Book just after leaving the loading area and just before entering into the game area can spot two hidden characters. On the top right corner of the back of the book is a Hidden Donald, and two characters down from him is a Hidden Mickey! These hidden characters are fun to spot but can be difficult as the ride vehicles tend to rotate rather quickly!

Once guests begin to play the 3D midway mini games, there are plenty of ways to score lots of points including a few hidden Easter Eggs. Easter Eggs are special targets or combinations in each mini game that guests can trigger to score big. Guests who are able to trigger these special targets and points can easily score several hundred thousand points to beat their family and friends. While it would be no fun if I gave away the Easter Eggs, guests should be sure to try and unlock them to score big on their next visit to Toy Story Mania!