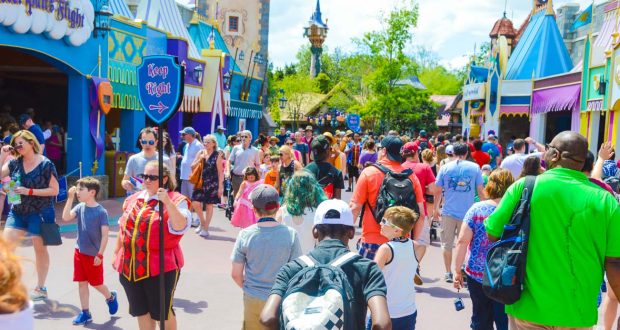 10 Spots We Try To Avoid at Walt Disney World

One of the only bad things about Disney World comes in the form of crowds. Crowded spaces are always more stressful, and during the busier times of year Disney can become exceptionally crowded. Fortunately, there are ways to avoid the worst crowds. Visiting during a slow time of year is one tactic, but even if you find yourself there in the middle of summer break—peak busy time, as longtime park goers will know—you can do some things to reduce the crowds you see and improve your overall experience. As an example, you might choose to visit the parks only early in the morning and again late in the evening, and thus spend the afternoon—which also happens to be the most crowded time of day—back at the hotel swimming or napping. Another great way to avoid crowds? Go around areas that tend to see traffic buildup. Below are the most crowded places in Disney World, as well as one spot we would just rather avoid. These are areas we skip whenever possible, and we think you should do the same.

Probably the area that is the most consistently crowded no matter what time of day you visit, the path that runs between “it’s a small world” and Peter Pan’s Flight is definitely one to avoid. At its worst, this small stretch of path can be so packed it hardly moves at all, something that can be incredibly frustrating if you’re in a hurry.

2. Monorail or Ferry at Closing Time

Leaving the Magic Kingdom at the end of a long day and heading for the parking lot is always a little bit daunting. Nobody wants to take a monorail or ferry and walk several hundred more steps just to get back to their car. What makes it even worse? Having to wait in a line for that monorail or ferry boat. If you leave the park right at closing time, you will almost certainly be met with a ridiculously long line for both forms of transportation, requiring you to be on your feet even longer after standing and walking all day.

Another spot that’ll require you to stand for a long time is the Flight of Passage line in Animal Kingdom’s Pandora – The World of Avatar. While we can’t recommend avoiding this queue completely—it’s much too cool a ride to miss—we do highly recommend avoiding it just after park opening, as this is when the line tends to be at its worst. Afternoons are pretty bad too, so we believe evening is the best time to brave the wait for this popular attraction.

4. The Path in Front of Expedition Everest

Wondering what other places in Animal Kingdom you should avoid? Well, you won’t be able to avoid it entirely if you plan to ride Expedition Everest, but we highly recommend avoiding the path that runs in front of this roller coaster whenever possible. Like the Fantasyland bottleneck, this area just gets super packed with people, making it difficult to pass through, especially during the busiest periods.

We totally recommend visiting Disney Springs during your Disney World visit. That said, we do not recommend visiting this shopping area on the weekend or during holidays. Because admission to Disney Springs is free, it gets really crowded really quickly, especially during those times when most locals are off work. In fact, Friday nights, Saturdays, Sundays, and holidays are often so crowded that the visit simply isn’t fun anymore.

6. Smoking Areas Outside of the Parks

Okay, so this one isn’t a particularly crowded area most of the time, but we like to skip it anyway: smoking areas. Walt Disney World theme parks, water parks, and Disney Resort hotels are smoke-free environments except for designated smoking areas. Each park has a designated spot for smokers to enjoy a cigarette outside of the park. Unless you plan on smoking or enjoy the smell of cigarette smoke, it’s best to learn where these areas are and avoid hanging out near them when exiting the park, especially if you have an allergy to the smoke.

The World Showcase is such a unique and fun part of Disney World. That said, the shopping, dining, and entertainment found here is much less fun when the crowd levels get too high. Unfortunately, large crowds tend to congregate in this area every single evening right around dinnertime and until the park closes. For this reason, we choose to tour Epcot backwards, seeing the World Showcase as soon as it opens and heading to Future World for the evening hours.

Pro tip: Plan to eat meals at odd times during your Disney trip. This will help you snag hard-to-get reservations, and you’ll avoid long lines at counter-service eateries. Eating lunch at, say, 10:30am or 2:00pm instead of noon could save you quite a bit of time and hassle, and you’ll likely have a more peaceful and pleasant dining experience. To make things even easier, consider using Mobile Ordering on the Disney app.

9. Galaxy’s Edge in the Morning or Afternoon

We mentioned above that the Flight of Passage queue is super crowded in the morning and afternoon. This is because the ride is relatively new and incredibly cool. Another relatively new and incredibly cool thing in the Disney parks is the new Star Wars: Galaxy’s Edge area of Hollywood Studios. As you might imagine, this entire land gets really crowded, and the worst crowds tend to accumulate in the morning and afternoon, making evening the ideal time to visit.

Lastly, we must mention the Epcot traffic jam spot located in front of Traveler’s Café (i.e. Starbucks) between Future World and the World Showcase. Because long lines tend to form for the coffee at this location, and because those who have already ordered tend to be standing around waiting for beverages to be made, we often see congestion happen in this area, making it easier to use a different path to access and/or leave the Showcase.