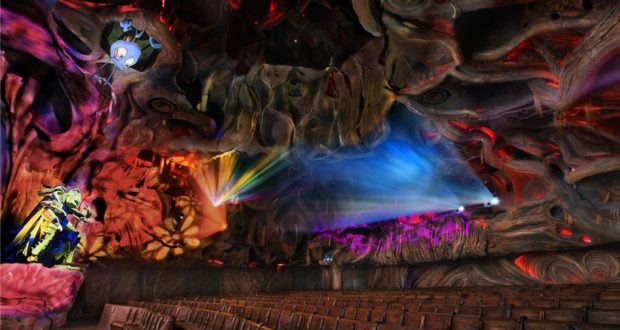 The only problem with offering so many different rides and attractions is that some will inevitably get lost in the shuffle. If only all of life’s problems were so easy to rectify. The following list will hopefully shine a spotlight on some of WDW’s more underappreciated attractions.

This animated 3D adventure follows an exasperated Donald Duck (is he ever anything but?) attempting to retrieve Mickey’s sorcerer hat as it bounds from one classic Disney film to another. Along the way, our favorite unintelligible duck finds himself inserted into iconic musical interludes from Beauty and the Beast, The Lion King, and Fantasia (among others). Nestled just beyond Cinderella’s castle, this attraction is often overshadowed by its more well-known neighbors such as Peter Pan’s Flight and It’s a Small World, which often means little to no wait time for this delightful air-conditioned experience.

2. Journey Into Imagination with Figment – Epcot

Future World’s Imagination Institute is home to one of WDW’s most beloved cartoon creations in the purple and orange embodiment of our imagination known as Figment. As the attraction’s moniker would imply, Figment serves as our guide as we journey into imagination while exploring the influence our five senses have over our flights of fancy. The spirited dragon serves as a worthy foil to crotchety Dr. Nigel Channing, and children will delight in Figment’s message of embracing their inner spark.

Located just beyond Kali River Rapids, this self-guided walking tour takes visitors through the Old Royal Forest where they’ll find all manner of wild animal. The Asian tigers are the main attraction, though you’ll also encounter frolicking gibbons, sunbathing Komodo dragons, and countless bird species as you traverse the ruins of this ancient tropical paradise. The best part of this attraction is that it can be enjoyed at your leisure as one of the more overlooked experiences at Animal Kingdom.

A Frontierland staple, Tom Sawyer’s island transports visitors to a land inspired by Mark Twain’s titular scamp. Log rafts ferry guests to the island, where they’ll find various areas of exploration. Scurry across wooden bridges, probe spooky caves, and take a tour of Fort Langhorn while Big Thunder Mountain Railroad roars on in the background. The island’s location allows visitors to view the park from a different perspective, and even includes seating areas outside Aunt Polly’s Dockside Inn, where they can enjoy a packed lunch or, if they’re lucky, grab a bite from the often elusive eatery. Though Aunt Polly’s operates sporadically, it serves up unique offerings, such as Becky’s buttery biscuit BBQ sliders and Mississippi mud brownies.

The Mexico pavilion’s Mayan pyramid is home to one of WDW’s most underrated boat rides, and the second entry on this list starring Donald Duck (we’re beginning to see why he’s always so angry). The plot finds Donald MIA as the Three Caballeros prepare to put on a show. It’s up to his band mates — Panchito and José Carioca — to track him down in time for their big number. The ride has the look and feel of It’s a Small World without the oft polarizing melody, and makes for a great pairing with its neighboring boat ride, Frozen Ever After.

Another 3D experience, this one is hosted by A Bug’s Life’s Flick as he entreats the audience to a crash course in entomology. Housed amid the roots of the Tree of Life, the film features 4D effects that offer guests a glimpse of what it’s like to be a bug, from being spritzed with insectile “acid” to enduring a stink bug’s odious emissions. Hopper’s antics may be a tad frightening for the little ones, particularly when the lights go out, but the film makes an honorable attempt to combat the stigma of insects being nothing more than pests.

Blast off on this journey into outer space, which offers two different experiences depending on your level of comfort. The Orange Mission sends teams of space cadets to the red planet in a harrowing outing with simulated G-forces and literal spinning centrifuge, while the Green Mission provides for a more family-friendly experience that dials down the movement. While this attraction remains popular, it’s hardly ever mentioned in the same breath as the likes of Soarin’ or Test Track.

Even though we’ve already included Maharajah Jungle Trek on this list, you can never really have too many animal experiences at a park called Animal Kingdom. This trail takes visitors on a walking tour of the Pangani Forest, home to okapis, zebras, and many other species native to Africa. The highlight of this hike, however, is the troop of lowland gorillas that can be found milling about the lush hillside. The trail is located among the same terrain as Kilimanjaro Safaris, and makes for the ideal epilogue to your excursion.

9. Living with the Land – Epcot

A leisurely boat ride that showcases how crops are cultivated around the world? While that may not seem to make for the most exciting attraction, WDW knows how to do infotainment right. This relaxing jaunt is not only enlightening, it’s also a real feast for the eyes. The various landscapes illustrate growing conditions and sustainable practices, and the bountiful crops cultivated within the attraction act as more than window dressing, serving as ingredients in dishes offered at both Sunshine Seasons and the Garden Grill Restaurant.