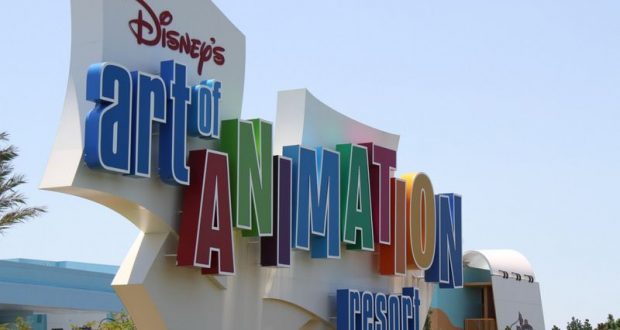 Missed days one and two? Click here to catch up!

At our three night media event that was hosted by Disney we were broken up into two groups, Team Mickey and Team Minnie. My daughter and I were on Team Mickey, and we started Thursday by climbing aboard a Mickey bus and heading to Disney’s Contemporary Resort. This is one of my favorite resorts at Walt Disney World because of the views of the Magic Kingdom, so I was excited that we would be spending some time there.

We had breakfast at The Wave… of American Flavors. All three meals are served here. At breakfast there is a buffet, and you have the option of ordering an entree. (There is no buffet at lunch or dinner.) Because we had been eating so much I decided to forgo the buffet all together and order off of the menu. I’ve been trying a lot of the new plant-based options lately, and I ordered the Garden “Egg” Sandwich. My daughter ordered the same thing, and we agreed that it was one of the top ten meals that we’ve ever had a Walt Disney World. It was a combination of crunchy, savory, and a little bit sweet. I would order this again in a minute.

Next we headed to the top of Disney’s Contemporary, to take a look inside California Grill. This signature restaurant is open only for dinner, and there are two walkways where you can go outside and enjoy a spectacular view of the Magic Kingdom. If you are looking for a romantic meal that will end with fireworks, this is the place to go. I can’t recommend it highly enough. Even though we didn’t dine at California Grill, it was nice to visit all three rooftop restaurants during this event.

Next we were treated to a two part presentation. We were asked not to take photos. The first part was led by a friend of mine who works on the technical side of things. We learned a lot about the My Disney Experience App, and how useful it is when staying at a Walt Disney World Resort hotel. You can check in ahead of time so that you can skip the front desk and head right to your room when you arrive. Turn on Bluetooth and use the app as your room key! That comes in handy if your trip was last minute and you don’t yet have your MagicBands, or if you’re traveling internationally. You can then pick up your bands at Concierge. If you’re traveling to or from the airport in a Minnie Van, you can add that on the transportation page on the app. These are just a few of the exciting features that many people do not know about.

The second presentation was on resort benefits and offers. We ran over some of the things that most people know about such as Early Morning Magic and the ability to make FastPass+ reservations 60 days in advance. One great piece of advice that I’d like to share is that you need to make sure that you have a current email address on file with Disney. As your trip approaches you will receive emails that will inform you of special offers or experiences that you might be interested in. We also learned about the Enchanting Extras Collection. There are over 100 unique experiences that many people may not know about. The collection features everything from dessert parties to Character Couture. You can learn more about these 100+ experiences at enchantingextras.com. The site is updated daily.

We then climbed back aboard our Mickey Bus and drove to Disney’s Caribbean Beach Resort. We got to see a Pirate Room. I’m not an all-about-pirates type of person, but I loved the details! It was so well done, everything from the pirate ship beds to the sword that was really a closet curtain rod. I had heard good things about these remodeled rooms, and the attention to detail was even better than I expected.

We saw Spyglass Grill, the updated lobby (known as Old Port Royale), the pool, and Banana Cabana. Lunch was at Sebastian’s Bistro. This restaurant is only open for dinner, our lunch there was because it was a special event. We still enjoyed some of the main menu items. If you are a fan of The Little Mermaid, you need to make a reservation at Sebastian’s Bistro. The food is delicious, and the theme is so much fun.

Next we were supposed to take the Disney Skyliner to Disney’s Art of Animation Resort, but the weather had other plans. Phil, the driver of Team Mickey’s bus, drove us there instead. The weather put a bit of a “damp”er on the tour, because part of it was to be outside. We were told that at Art of Animation you’re to be “animators in your own story”. The resort has areas based on Cars, The Lion King, The Little Mermaid, and Finding Nemo. If you have never visited Disney’s Art of Animation Resort, hop on the Skyliner the next time you’re at Walt Disney World and check it out! From the reprints of original sketches on the walls at check in, to the multiple picture opportunities in each area, you will feel as if you are living in a movie. We saw one of the newly updated suites in the Cars area. Kids of all ages will love it! Disney’s Art of Animation is also home to the Big Blue Pool, which is the largest pool at any of the Disney Resorts.

Our final dinner of our three night event was held at Jiko – The Cooking Place. The word “jiko” is Swahili for “the cooking place”, hence the name. This restaurant needs to be on your must-try list. The lighting is low and the restaurant is filled with wood tones to create a twilight feel. Disney’s Animal Kingdom Lodge is home to the largest collection of African wines outside of Africa, and the staff is more than willing to make recommendations. The food is African, Mediterranean, and Indian. If you aren’t familiar with these cuisines, don’t worry. Your server will be happy to answer all of your questions. While it wasn’t what I ordered, everyone in our group who had the Oak-grilled Filet Mignon could not stop raving about the mac and cheese that came with it. I was fine with my West African Koki Corn. It wasn’t close to what I expected it to be like, but it was filled with flavor. Jiko also offers some special dining events, including a wine tasting. Do not dismiss this wonderful eatery.

After dinner we once again took Minnie Vans back to Disney’s Riviera Resort. Our driver gave us one little tip about why it makes sense to use this service instead of another rideshare if you are headed to the Magic Kingdom. She said that Minnie Vans are allowed to drop off right near the park. Other ridesharing companies will drop you off at the Transportation & Ticket Center.

We were given the option of attending Disney After Hours at the Magic Kingdom. Even though it had already been a long day, we were not going to turn this down! We decided to take a Disney bus from the resort. All along I said that I wanted to experience our stay like a regular guest, even though it was tempting to just drive. There was a bit of confusion on whether or not another bus would be going to the Magic Kingdom. A Cast Member from the lobby was extremely helpful and found out the information for us. She went one literal step further, because she walked with us to the bus stop. She did not know that we were in the media group, she just wanted to make sure that we were able to get where we needed to be. That is the level of service that we experienced.

I plan to write more about Disney After Hours, but since it was how we wrapped up our day I still want to mention it here. If you like short lines and as many Mickey bars as you can eat, you want to include Disney After Hours in your plans. It was a great way to wrap up the last full day of our Walt Disney World Resort Showcase. CLICK HERE for my Disney After Hours write up and photos!