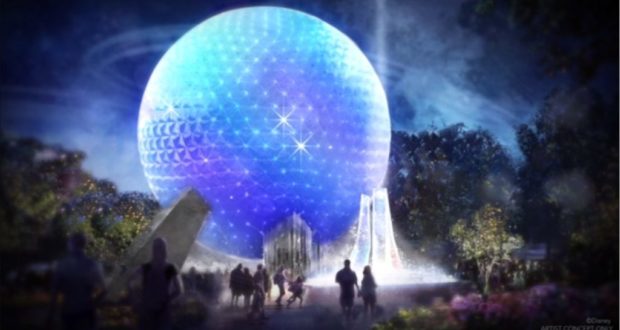 Testing is necessary as Walt Disney World Resort gears up for its 50th Anniversary celebration kicking off on October 1, 2021. With 18-months of excitement, Disney is making sure they have got it right with the needed testing once Guests have left the Park for the day. Magic Kingdom Park recently tested their new fireworks show, “Disney Enchantment” which caused a backstage fire and put a halt to the “Happily Ever After” fireworks the following night. Thankfully, all is back up and running now! Testing has also been spotted for EPCOT’s new nighttime spectacular, “Harmonious.” As of last night, a video captured EPCOT testing the new “Beacons of Magic” lights on the iconic Spaceship Earth.

Reporter Scott Gustin took to Twitter on September 9 to share the video below with the message: “Spaceship Earth “points of light” testing from last night:” The video originally was posted by @laughing_place:

The replies to the video of the testing are mixed, however. @WOFginger responded with “I really gotta see it in person. Looks super cheap on video.” Another response from @EllaTremaine4 says, “I hate it. A tacky, giant disco ball. Also, I am guessing there will always be a “bulb” or two that won’t come on. That will drive me crazy.” A response from @FrankMakesStuff says, “The keyword here is “testing”, folks. Just testing the individual RGB LEDs in each fixture, at full brightness. The final result will be more subtle (pleasing colors with brightness toned down) to compliment the already-established blue/amber floodlights.”

Disney has previously shared that a song called “The Magic Is Calling” will connect to all four parks, as different arrangements of the song will be heard when each Walt Disney World theme Park icon transforms into a magnificent Beacon of Magic at night, beckoning all to come and celebrate. Cinderella Castle at Magic Kingdom, Spaceship Earth at EPCOT, Hollywood Tower Hotel at Disney’s Hollywood Studios, and the Tree of Life at Disney’s Animal Kingdom will each shine like never before and come to life on select nights with their own unique EARidescent glow.

Walt Disney Imagineer, Zach Riddley’s most recent update on one Disney Park Beacon of Magic with news of Spaceship Earth’s progress including: “Last week we shared an exciting new look at all four Beacons on Magic coming to life as part of the WDW 50th Anniversary. Our new lighting system for Spaceship Earth is something entirely original – a first-of-its-kind programmable LED lighting system invented by our very own Imagineers to integrate seamlessly into the iconic Spaceship Earth façade. I’m proud to share today a few pics from behind the scenes of the project, led by Imagineers Jason Read and Galen Lande. Take a look! Installation of the system is nearly complete, and our team has been hard at work testing. Jason, Galen, and their team are leveraging a “pre-cueing” system to pre-visualize and program this new system virtually – allowing us to test many different ideas before locking in on our best look. And we are finding some very cool effects – giving the surface of Spaceship Earth an entirely new feeling and visual identity visible from all corners of the Park. We are exploring visual poetry that respects the lighting legacy of this grand icon while bringing rich new depth and motion to life – all inspired by colors and textures that evoke stardust and the mystery and wonder of our universe. And we’ll be able to tie this program into the surrounding Main Entrance Plaza and new fountain and pylon lighting to fully immerse Guests with an experience that is … EPCOT. We have more work to do before we’re ready to reveal this to the world as part of the Most Magical Celebration on Earth, starting Oct 1st!!‌”

What do you think of the testing video? We’re sure once tests are complete we’ll be wowed by the performance Spaceship Earth will put on as one of the four Beacons of Magic in celebration of Disney World’s 50th Anniversary!