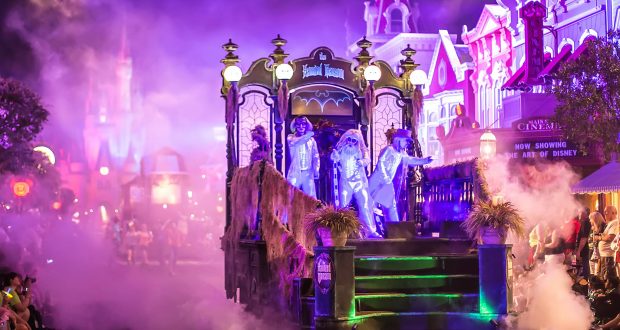 Mickey’s Not-So-Scary Halloween Party is an annual special event that takes place on select nights at the Magic Kingdom. It is a lot of fun for the whole family, unlike the Halloween event in that other park in Orlando. The decorations are great, and there is a family party atmosphere. It starts in September, and it usually runs through October, although it has been known to keep going a night or two in November as well. You will need a ticket, even if you’re an Annual Passholder or are already in the park that day. Here are ten things that make Mickey’s Not-So-Scary Halloween Party so special.

Since Mickey’s Not-So-Scary Halloween Party is a separate ticketed event, the crowds are less than on an average autumn day. The party doesn’t start until 7:00, but if you have a ticket you can enter starting at 4:00. When the day’s crowd clears out, you’ll be able to experience the park with only the other party guests. One word of warning; the first party of the year and the last few are usually the most crowded. Friday nights also tend to be popular. If there is a party on Halloween night, it will sell out.

Adults are not allowed to wear costumes to the parks most of the time, but at Mickey’s Not-So-Scary Halloween Party they are encouraged. There are guidelines for what is and isn’t allowed for all ages, so make sure you check the Walt Disney World website for the latest costume regulations before you leave for the park.

Magic Shots are a way that special magic is added to some photos through Memory Maker, and at Mickey’s Not-So-Scary Halloween Party you might end up with some great, unexpected pictures. Locations and additions change, but you could end up with the Headless Horseman in your picture, or maybe there will be another “frightening” photobomb.

Special events at Walt Disney World always have extra goodies for sale. They might change annually, but you can usually expect event themed cupcakes and other sweet items. Most likely there will be an event popcorn bucket available as well. There are often specialty drinks sold at the party. Seeing how Mickey’s Not-So-Scary Halloween Party is held at the Magic Kingdom, the event drinks will be alcohol-free.

Another thing that you can count on at a special event is merchandise that isn’t sold when the event isn’t going on. At Mickey’s Not-So-Scary Halloween Party there will be T-shirts, pins, MagicBands, and more. They won’t be available during normal Magic Kingdom hours, they’ll be just for the party.

There is extra live entertainment at Mickey’s Not-So-Scary Halloween Party. Shows can change each year, but in the past have included the Cadaver Dans (think Dapper Dans in the afterlife) and Hocus Pocus Villain Spelltacular. There is also a dance party for the whole family.

One of the favorite parts of Halloween for many children is trick or treating, and at Mickey’s Not-So-Scary Halloween Party they can do just that. There is so much candy included with the price of admission that your kids might try to eat their weight in candy. Locations can be found on your special park map. You’ll find plenty of adults trick or treating at the party as well. If you do, please be careful of the little ones around.

If you love classic characters in different outfits, you will want to buy a ticket for Mickey’s Not-So-Scary Halloween Party. This is the only place to find some of your favorites in their Halloween costumes. There are also some characters who aren’t normally in the Magic Kingdom who you might be able to get a picture with. Villains love Halloween, so you might run across some of your favorites. There are also some non-villains who might make an appearance. At past parties, all seven dwarfs have appeared.

For many, Mickey’s “Boo-To-You” Parade is one of the best parts of Mickey’s Not-So-Scary Halloween Party. In the past, the parade has featured many different Disney characters in their Halloween outfits, but the highlight has been the ride of the Headless Horseman. Make sure you grab a viewing spot early so that you can take great pictures.

A Halloween-themed fireworks display is another highlight of the party. In the past, the soundtrack included some of the “scarier” Disney songs such as Grim Grinning Ghosts and The Skeleton Dance. Disney villains helped to light up the sky with a display that features more orange than usual. Cinderella Castle also received a creepy light show to add to the fun. The fireworks might change a bit from year to year, but they will always be awesome.