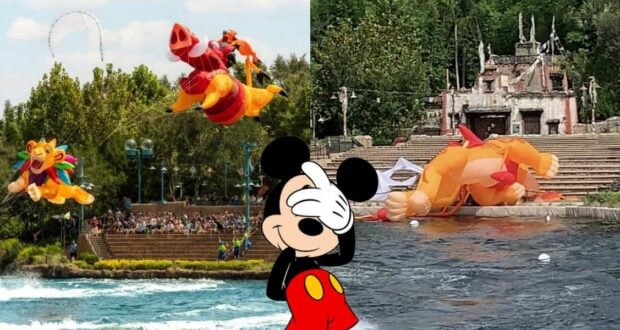 It happens. While we like to believe Walt Disney World Resort will get it right every time, no company is perfect, and flops occur. Disney KiteTails, daytime entertainment recently offered at Disney’s Animal Kingdom, may have been pulled from the Disney Park… but it seemingly lives on!

Disney KiteTails launched at Disney’s Animal Kingdom on October 1, 2021, as part of Walt Disney World’s 50th Anniversary celebration. The daytime show was held in the large Discovery River Theater lagoon, just outside of the popular attraction Expedition Everest – Legend of the Forbidden Mountain.

The show featured massively colorful kites that would soar above the water as they were pulled by jet skis. Character kites such as Zazu and Simba from The Lion King (1994), and Baloo and King Louie from The Jungle Book (1967) flew through the sky.

RELATED: Disney Is Still Advertising KiteTails Even Though It Is Now Extinct

Sounds amazing, right? Well, in order to land the kites, the jet skis would slow to allow for the character kite to crash into a pedestrian-free portion of the stadium. It was hilarious, yet dreadful to watch. Plus, kites were regularly getting stuck in the surrounding trees. Let’s just say KiteTails became a dose of hilarious entertainment for all the wrong reasons.

Disney caught on to the not-so-great reviews and decided to cancel the show before the end of the 50th Anniversary celebration. The show officially ended on September 27, 2022.

RELATED: Pumbaa, Baloo, Others Have It Rough at ‘KiteTails’: Fans Love the Chaos, Not the Story

But, alas, to the surprise of many, the kites aren’t just sitting in a closet somewhere! Instead, at the popular Global Association for the Attractions Industry yearly convention in Orlando, Florida (known as the IAAPA Expo), KiteTails was resurrected.

@JacklynKrol took to social media to share a photo from the expo with the note, “Kite Tails stans rise…” Check out the image in the tweet below:

We see you, Zazu! Not only is Zazu featured at the expo, but you can see in the image the Zazu and Simba kite characters featured in the photograph at Disney’s Animal Kingdom.

The company has been offering “World-Class Kite Shows and Events” since 1993 as they “custom designed, created and executed kite shows, one-of-a-kind kites and elegant Kiteman Feather Banners™ for the world’s most famous theme parks and successful events… Entertaining millions for over 30 years!”

At least Disney KiteTails was able to live on for the convention! Where the kites are off to next is still a mystery, as Disney is hopefully working to fill the daytime show void Disney KiteTail left in its path.

2022-11-17
Jamie Sylvester
Previous: If You’re Hoping to See The Christmas Morning Parade at Disney World, We Have Bad News
Next: Disney Channel Star’s Death Certificate Reveals Little About His Death