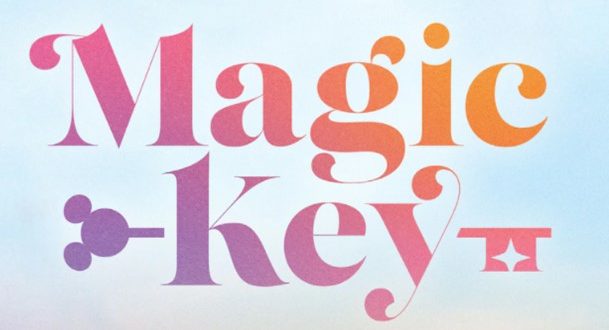 When Disneyland opened the virtual queue yesterday so fans could purchase one of four levels of the newly-unveiled Magic Key, the excitement in the air over the new program was palpable.

And who can blame them? After all, Disneyland Resort was closed for 412 days–more than 12 months–and the new program gives Guests accessibility to the Disneyland parks at a level that makes the most sense for them on an individual basis. 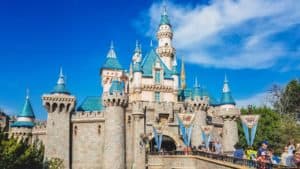 But the excitement soon turned to frustration for many as they found themselves in a virtual queue, receiving notifications about wait times exceeding one hour or more. 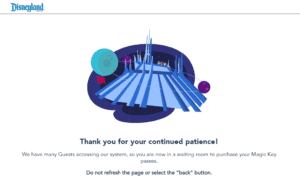 By about 11:45 a.m., users awaiting the chance to make their purchases saw perhaps the most frustrating notification of all: “our system is temporarily unavailable.”

Many Disneyland fans took to social media to share their frustrations with the difficulties in accessing the virtual queue to purchase their new Magic Key passes.

@AseaTremp shared her frustration with yet another queue as she waited to buy her Magic Key passes, even using the hashtag “#disneyfail.”

@disney @disneyland waited over 2 hours, got in the site, and then the coding was trash and I could not checkout. Now I'm back in a brand new queue at over an hour again. Whyyyyyyyyyy #magickey #disneyland #disneyfail

Waiting to get my Magic Key… #Disneyland pic.twitter.com/Hwoqd158o5

By 2:oo p.m. PST, some users had been online waiting for their turn to purchase a Magic Key, and they were still receiving messages that their wait times would still exceed one hour.

Once Guests were able to access the site and choose their Magic Key, many were disappointed, frustrated and even angry when they received messages about issues with payment methods. Some California residents were not given the payment plan option (which is exclusively for residents of the Golden State). And other fans were denied the option to park hop on days when both Disneyland Resort parks had wide-open availability.

And one especially determined and dedicated fan got a very defeating message after waiting more than 7 hours to get her Magic Key. Yes, 7 hours.

I have been trying to get a Disneyland Magic Key pass for almost seven hours….Getting this message and other messages about payment, but credit card company says it is a problem with Disney. #magickey pic.twitter.com/9zDsoQ8Em3

Hopefully many of these problems were just first-day jitters on the part of Disneyland’s new park pass program. Time will tell. DisneyDining will continue to follow the new program and update you as well.