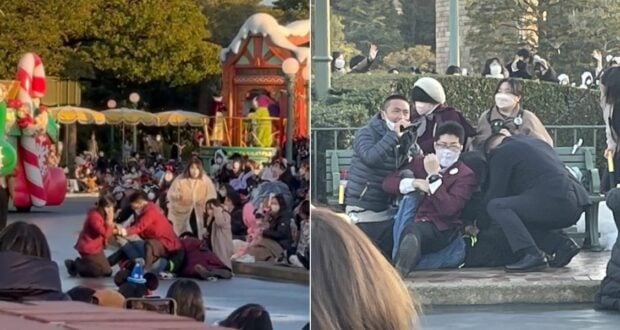 “Suspicious” Disney Guest Gets Tackled After Jumping Into Parade Route

Multiple videos have been shared on social media showing a Disney Park Guest jumping into the middle of a parade route at Tokyo Disneyland Resort, then being tackled to the ground and forcefully removed.

On December 13, 2022, a performance of the Disney Christmas Stories Parade at Tokyo Disneyland Resort was underway, featuring Disney characters such as Mickey Mouse, Minnie Mouse, Donald Duck, and Daisy Duck dressed in festive outfits for the holiday.

As Disney Park Guests lined the route for parade viewing of the holiday entertainment, they were shocked to see an unfortunate incident unfold near what looks like the hub of Cinderella Castle.

@momoyaaa2 was videoing the popular Tokyo Disneyland Park holiday parade when a man ran out into the parade route near an elf character, raising his hands and standing in the middle of the street with oncoming parade floats.

It doesn’t take long for the man to be tackled by what looks like Disney Cast Members and security.

RELATED: Disney World Parade Comes to Standstill at Magic Kingdom When Child Runs Into Street and Climbs Onto Float

Another Park Guest, @pienpienna, also captured a different angle of the incident via the video below, with the note, “Somehow someone rushed into the parade!”

Follow-up photos show the man was finally detained off the parade route and moved onto the sidewalk with Guests removed from the area, as shown in the tweet below by @maichimu34, stating, “I wondered what happened. Suspicious person at Disney.”

A final video from @_panda415 shows the man forcefully being removed from the situation by multiple Cast Members and security:

A local news report shared that the Chiba police arrested the 51-year-old man for storming the theme park parade around 3:45 p.m. for “blocking the parade that was being held at Disneyland, interrupting it, and obstructing business.”

The report goes on to confirm that according to the public relations department of Oriental Land, the operators of the Disney Park, “the man broke into the “Disney Christmas Stories” parade from 3:30 p.m., interrupting it for about six minutes.”

The reason behind the man’s intrusion is still unknown. We are thankful Cast Members were quick to respond for the safety of the Guests and parade performers. No injuries were reported.

2022-12-13
Jamie Sylvester
Previous: Disney Reveals Arrival Date for EPCOT’s ‘DuckTales’ Experience
Next: Dove Cameron Recalls Advice From Selena Gomez That “Made All the Difference” in Her Career