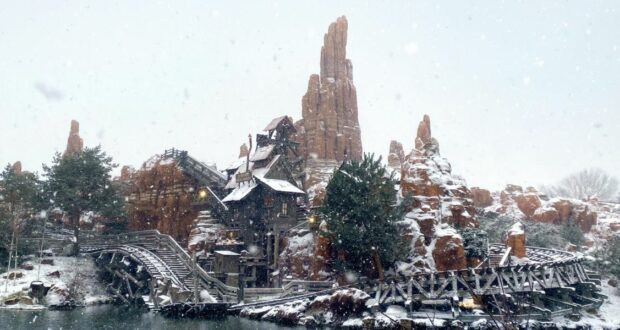 Mid-way through Decemeber and a stunning sight of photos and video are being shared of a fresh blanket of snow that has arrived at a popular Disney Park.

It is almost impossible to imagine a wintery weather mix reaching Walt Disney World Resort in Florida or Disneyland Resort in Calfiornia. Both Disney Parks tend to offer “snow” made from bubbles during the holiday season that gently falls on Main Street, U.S.A.

But, at Disneyland Paris, there is no need for fake snow today!

A stunning blanket of snowfall has covered the beloved European Disney Park. With two theme parks, including Disneyland Park and Walt Disney Studios Park, photos and video of Disney attractions covered in snow are too beautiful not to share.

@DLPReport took to social media to share a video of Disneyland Park’s Frontierland, with Big Thunder Mountain covered with a blanket of snow on December 14, 2022:

An image of Disneyland Paris’ Sleeping Beauty Castle covered in snow is a must-share:

Above you’ll see the nostalgic Autopia and Star Wars Hyperspace Mountain attractions in the Discoveryland portion of Disneyland Park.

From Avengers Campus to Worlds of Pixar and Production Courtyard, Walt Disney Studios Park experiences glimmer in the snow.

It looks like Lightning McQueen is going to need a set of windshield wipers!

RELATED: Live In California and Love Disney? At This Point, It’s Cheaper to Visit Disneyland Paris

@JimShull took to social media to share the stunning picture below with, “Your moment of Winter zen viewing a snow covered Thunder Mountain in Frontierland at Disneyland Paris. I’d hurry outside to walk in the freezing weather and watch the snow fall on the town of Thunder Mesa. Amazing and believable environment. #Disneylanparis #snow”

A few more favorite shots of Disneyland Paris covered in snow, as shared by @dlrpfans:

Currently, in it the middle of its 30th Anniversary Celebration, Disneyland Paris is welcoming Guests to its Parks despite the winter weather that has arrived.

If you’ve never visited Disneyland Paris in the heart of France, its not only a popular theme park destination for local European Guests, but it’s well worth the travel to explore for any Disney theme park junkie. Bundle up, Disney fans!

2022-12-14
Jamie Sylvester
Previous: Things We Just Can’t Say “No” to at Walt Disney World
Next: Another Iconic Disney Attraction Closes in January 2023