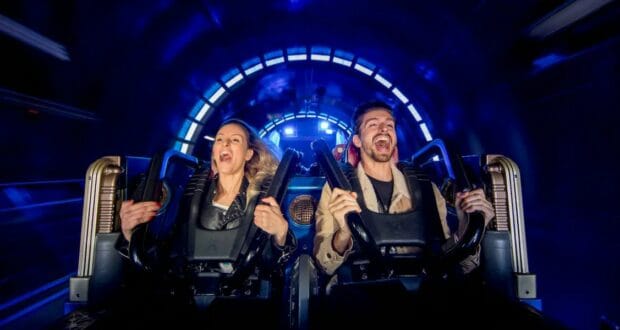 With the vast amount of Guests visiting Disney theme parks, it’s inevitable that attractions will break down or require routine maintenance on occasion. But can you imagine an evacuation from an attraction’s rooftop?!

Hyperspace Moutain at Disneyland Paris features a Star Wars takeover of the usual Space Mountain ride experience. The classic space ride allows Guests an opportunity to “Blast off and do battle with the evil Empire in this epic takeover of a classic attraction.”

For Guests visiting Disneyland Park in Paris, Hyperspace Mountain is an extremely popular attraction as it looms over the Discoveryland portion of the Disney Park.

But, a few Guests got to experience an evacuation with impressive views as they were removed from Hyperspace Mountain via the exposed rooftop portion of the attraction.

@DLPReport shared a video via social media on November 12, 2022, with the note, “At Hyperspace Mountain, Guests are being evacuated down the cannon’s stairs due to a train stuck on top of the catapult.” Check out the video in the tweet below:

RELATED: A Brand New Space Mountain Is Coming to One Disney Park

The Disneyland Paris website currently states, “As part of our continuing efforts to exceed the expectations of our Guests, this attraction is closed today.”

While Disney does not share why the attraction is closed, with the recent evacuation, it is likely the unexpected closure is due to maintenance issues.

Ready to take a ride on Hyperspace Mountain? Check out the video below:

“Launch yourself into Star Wars Hyperspace Mountain for a thrilling takeover of a classic space attraction. Enlist in the Rebel Alliance and attend a briefing from Admiral Ackbar. Your mission – to pilot a reconnaissance vessel and spy on an Imperial Star Destroyer.”

“It’s a Trap! To the Admiral’s despair, the Empire is expecting you, welcoming your arrival from hyperspace with open armaments. It’s down to you and your X-wing escort to blast through a swarm of deadly TIE fighters and blow up a menacing Star Destroyer. Will the Force be strong with you?”

“With a frenzy of red and green blaster fire, the wicked whirr of TIE fighters and a stunning Star Wars™ score, Star Wars Hyperspace Mountain is a jaw-dropping experience fit for the most fervent followers of the Force.”

The attraction experience is a blast! We hope Hyperspace Mountain will be up and running once again in the very near future for Park Guests to enjoy.