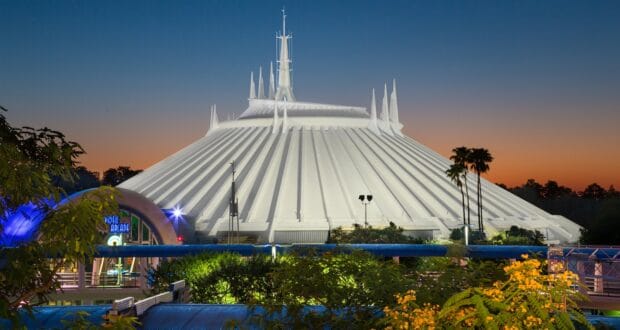 Have You Noticed These Details on Space Mountain?

There are plenty of popular and iconic attractions throughout the Walt Disney World Resort that Guests absolutely need to experience at least once on each visit to the Disney Parks. One of those beloved attractions is a futuristic adventure through the thrilling darkness of space that leaves Guests dreaming of the next time that they can blast off again. 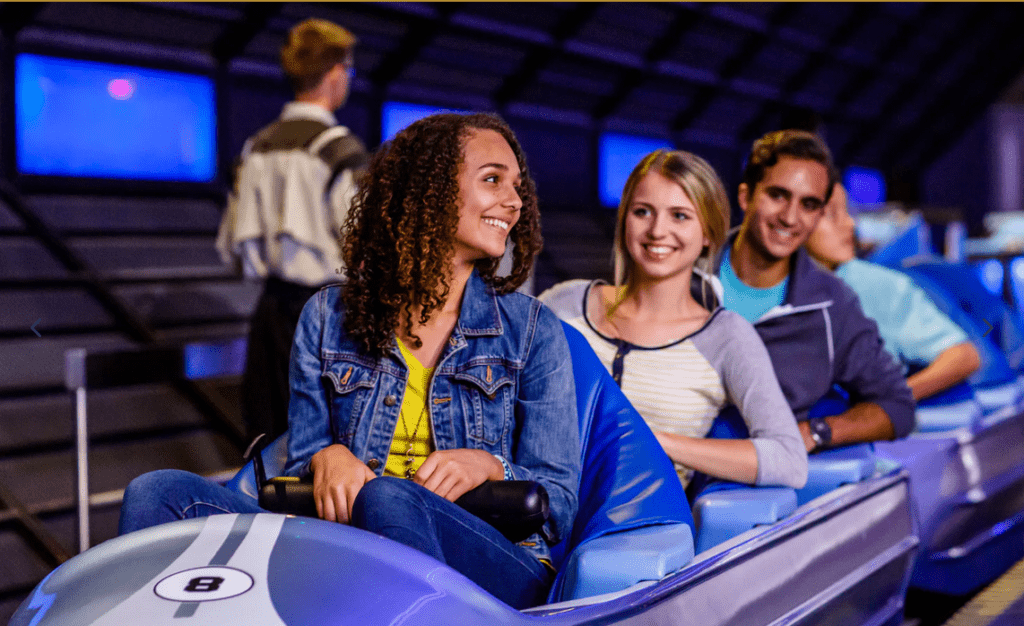 Space Mountain is found in the heart of the Magic Kingdom’s Tomorrowland and dominates the skyline of the area with a massive and futuristic building. The attraction welcomes Guests into an intergalactic spaceport, where they can enjoy the opportunity to blast off into the inky blackness of outer space on an unforgettable roller coaster journey. The attraction is also part of the Magic Kingdom‘s mountain range which also features the Seven Dwarfs Mine Train, Big Thunder Mountain Railroad, and Splash Mountain. 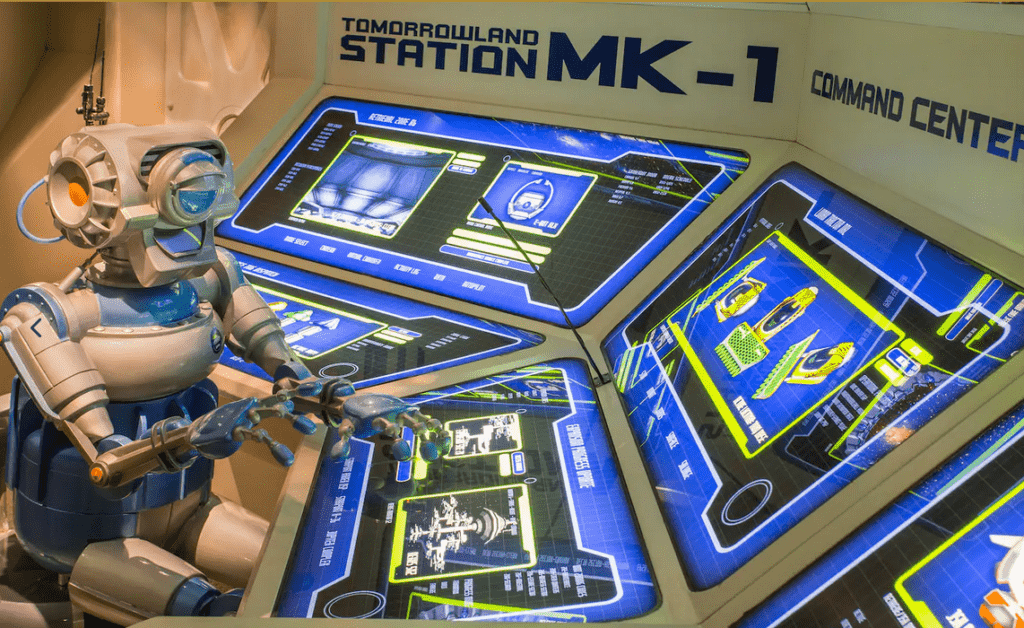 While Space Mountain is incredibly popular with Guests and is enjoyed frequently, there are so many wonderful and subtle details that help support the attraction’s theming that often are overlooked. Let’s slow down and check out some of the amazing details that can be found on Space Mountain in the Magic Kingdom throughout both the queue, attraction, and post-show. 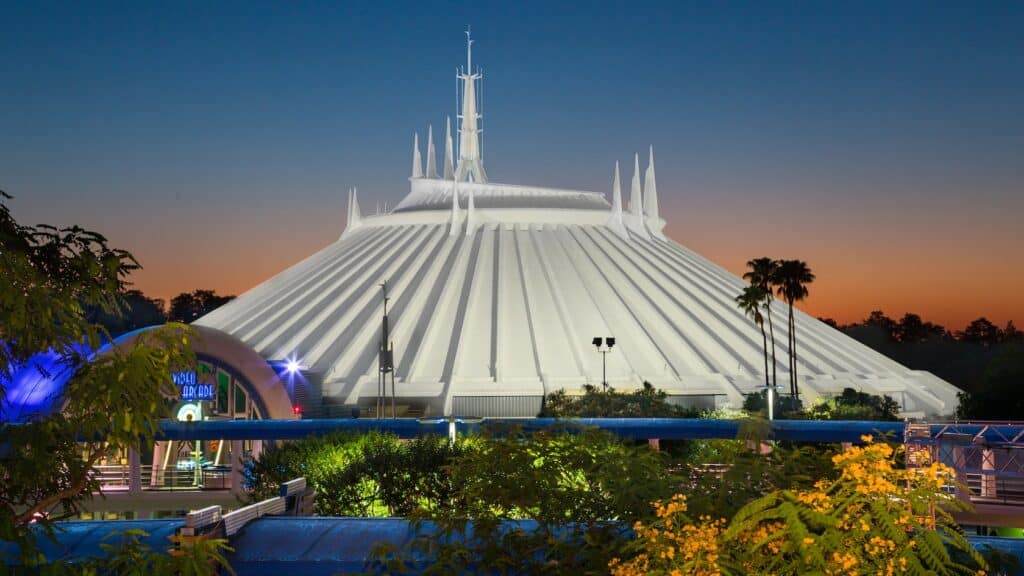 Space Mountain is one of the most recognizable structures at the Walt Disney World Resort, which features an innovative architectural style that is rooted in both design and practicality. The exterior of Space Mountain features a bright white color and soaring beams that reach up to the sky and come together in a central point over the skies of Tomorrowland. 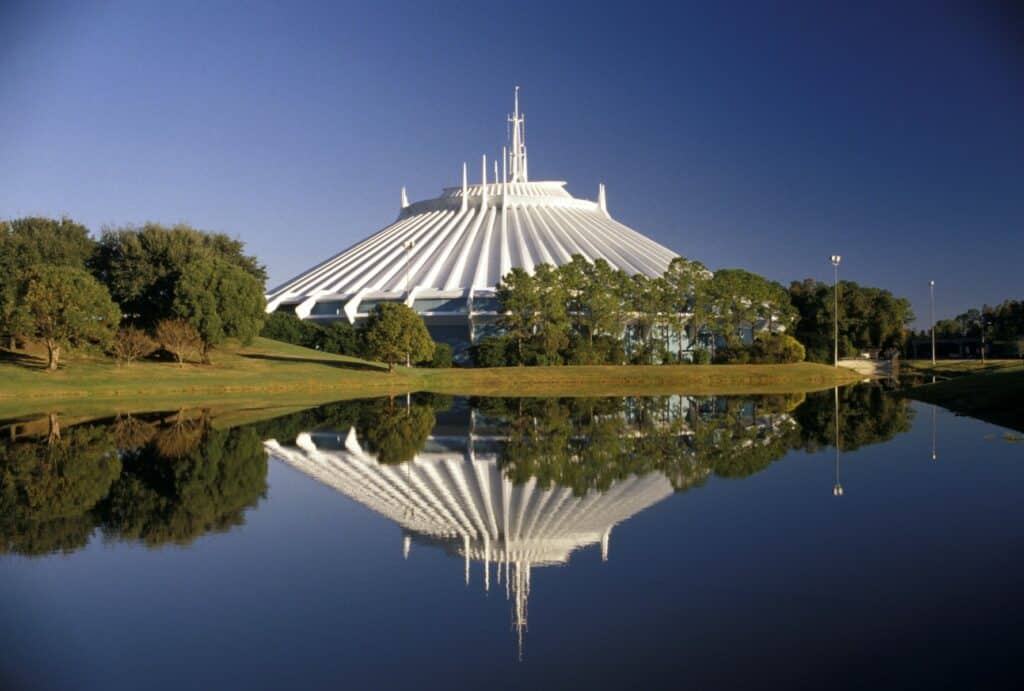 The design was created by Imagineering legend John Hench, who not only found it futuristic, but incorporated the use of forced perspective to draw the eye up and make the structure look larger than it is. He also brilliantly came up with the idea to place the beams on the outside of the building for both a futuristic look and a seamless interior ceiling where projections of stars and planets could smoothly be displayed for Guests. 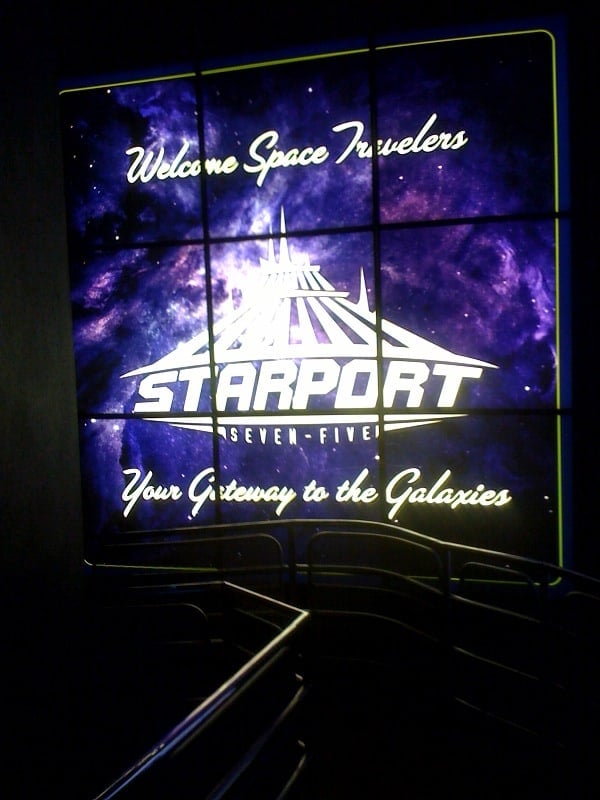 Immediately after entering the main entrance of Space Mountain, Guests find a massive sign welcoming them to Starport Seven-Five. This fictional intergalactic spaceport serves as the setting for Guests to be able to board a transport vehicle to bring them to the far corners of the galaxy. Starport Seven-five also pays tribute to the year 1975 when the attraction first opened at the Walt Disney World Resort. 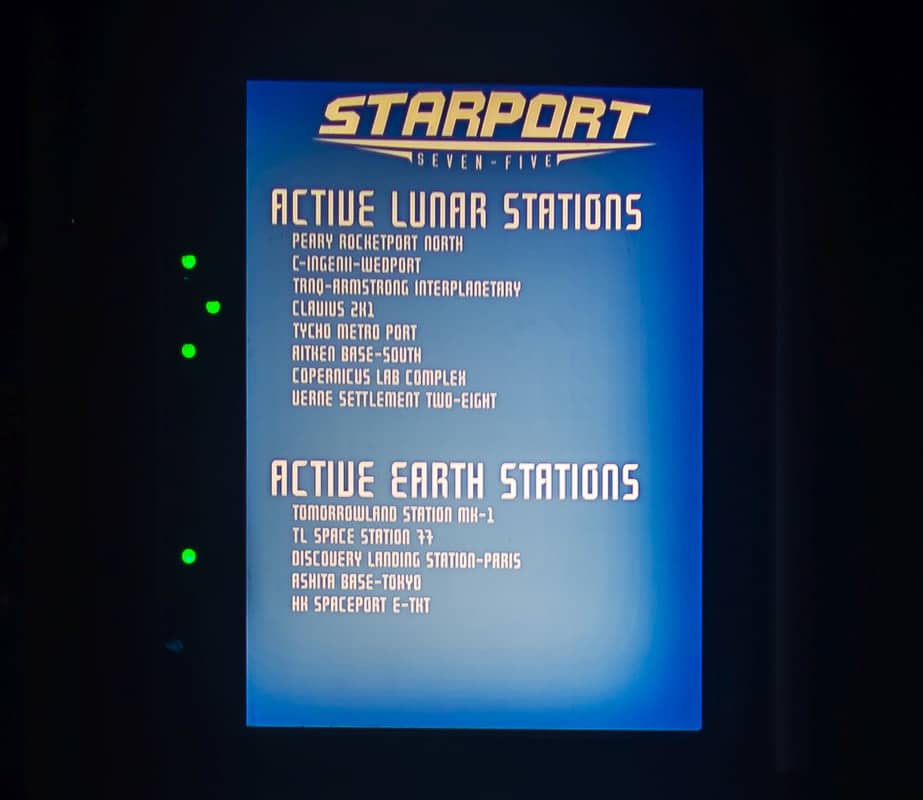 Found near the Starport Seven-Five sign in the first room of the indoor portion of the queue is another sign that pays tribute to all the Space Mountains found in Disney Parks across the globe. A sign titled “Active Earth Stations” features a list that references five different attractions in subtle ways that many Guests completely overlook. “Tomorrowland Station MK-1” references the Walt Disney World version of the attraction, “TL Space Station 77” refers to the Disneyland Park version, which opened in 1977, next up, “Discovery Landing Station – Paris” refers to the attraction in Disneyland Paris which can be found in Discovery Landing, “Ahita Base – Tokyo” pays homage to Tokyo Disneyland with “Ahita” translating to “tomorrow”, and “HK Spaceport E-TKT” references both the attraction in Hong Kong, as well as E-Tickets which were tickets available for popular when the Walt Disney World Resort opened in 1971. 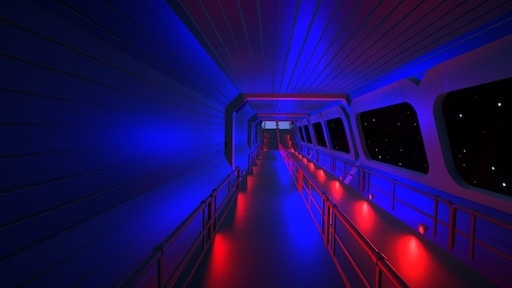 As Guests move through the queue and into a long tunnel, a very soothing and popular piece of background music guides them deeper and deeper into Space Mountain. These long tunnels first slant down then back upwards as Guests pass by windows looking out into the starry blackness of space while the Star Tunnel music plays. This background music is an ethereal series of gentle, overlapping tones that somehow captures the beauty of space with a futuristic element, and it is one of the most recognizable pieces of music in the Disney Parks! 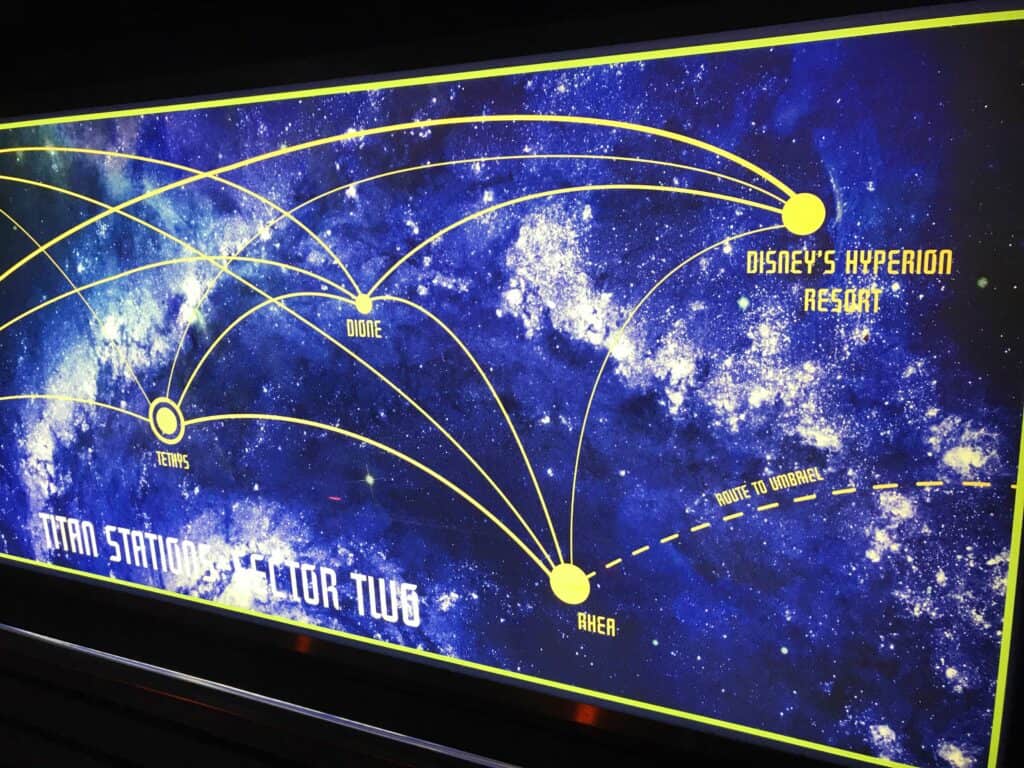 After moving through a portion of the long tunnel area, Guests pass by a series of windows on the left that display other spaceport locations throughout the galaxy, including the names of real stars. Towards the end of these displays is the location of Disney’s Hyperion Resort, which is a clever reference to Hyperion Street where Walt and Roy Disney opened their very first studio. 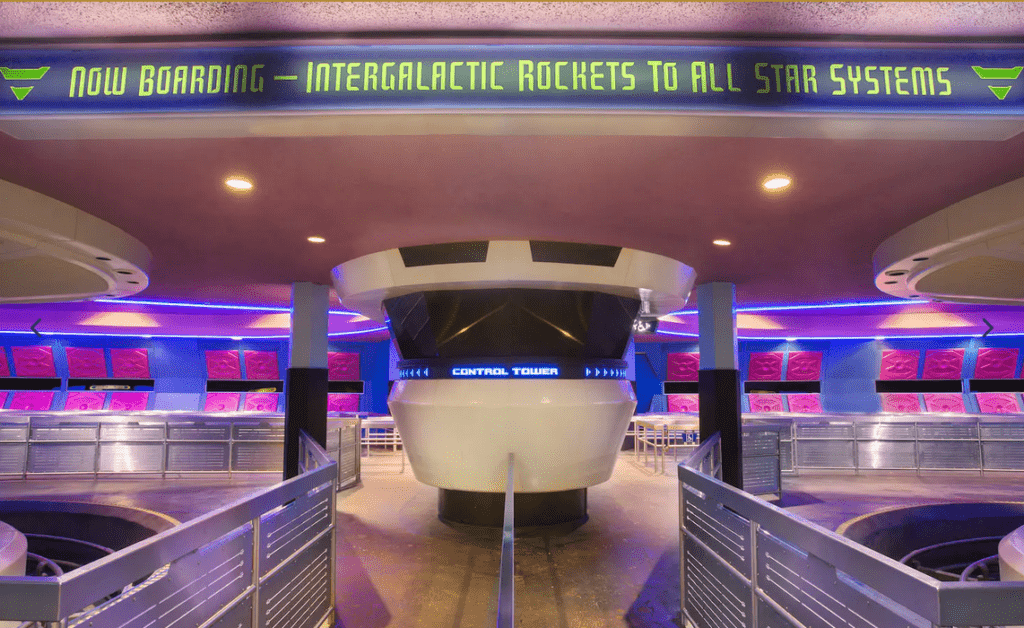 When Guests reach the loading area for Space Mountain, a Cast Member directs them to either head right or left to continue on towards their boarding. The split in the line leads Guests to either the Alpha or Omega tracks, which are essentially mirror images of each other inside the building, except for an additional ten feet of track on the Alpha side needed to cross over Omega. 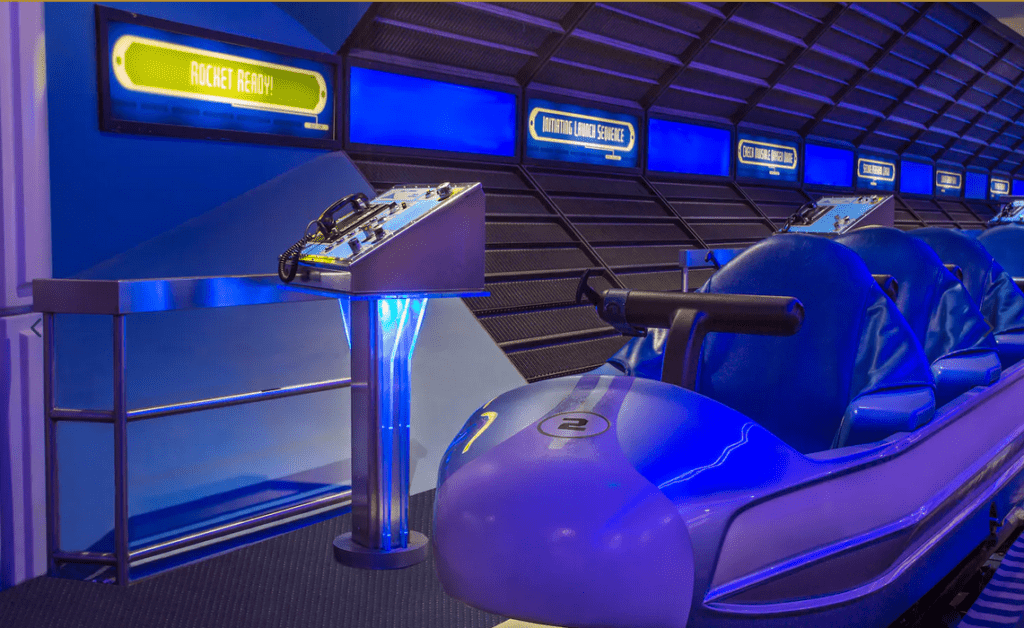 Space Mountain absolutely feels like a high-speed, thrilling adventure through space, where the darkness makes every turn and drop feel unexpected and sudden. While it definitely is a thrilling attraction, Guests might be surprised to find out that it only tops out at a meager 28 miles per hour! This is a far cry from some of the fastest attractions at the Walt Disney World Resort, including Test Track Presented by Chevrolet which reaches 65 miles per hour, and the Rock ‘n’ Roller Coaster Starring Aerosmith which tops out at 57 miles per hour. 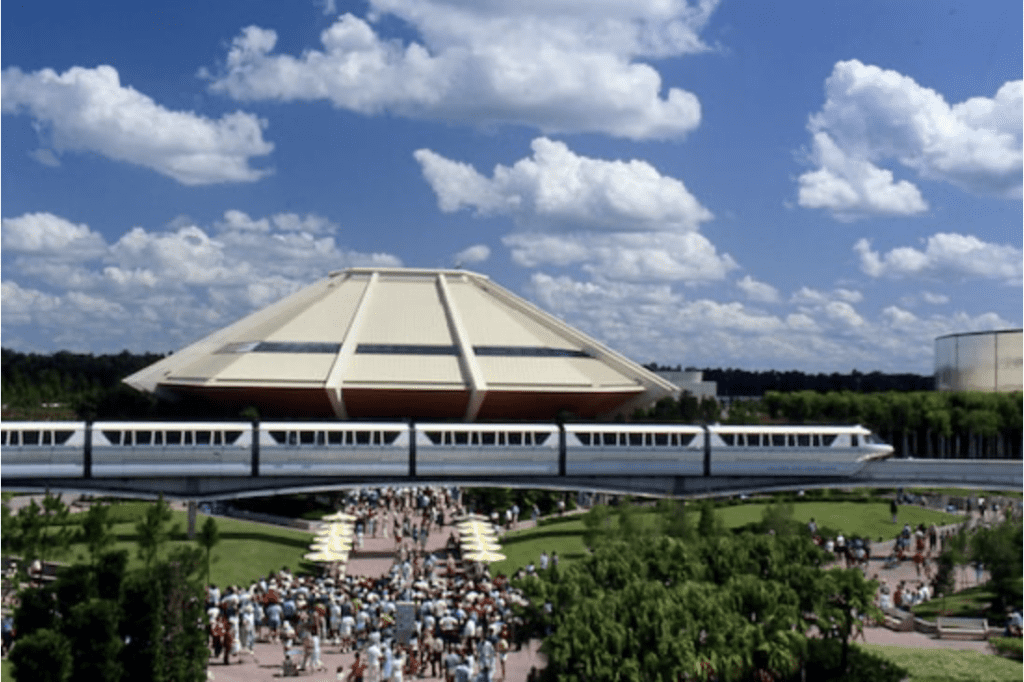 After enjoying the thrilling adventure through space on Space Mountain, Guests disembark their rockets and head to a lengthy moving sidewalk that brings them past several scenes portraying futuristic locations with two references to Horizons, a former attraction at EPCOT that closed in 1999 to make way for Mission: SPACE. 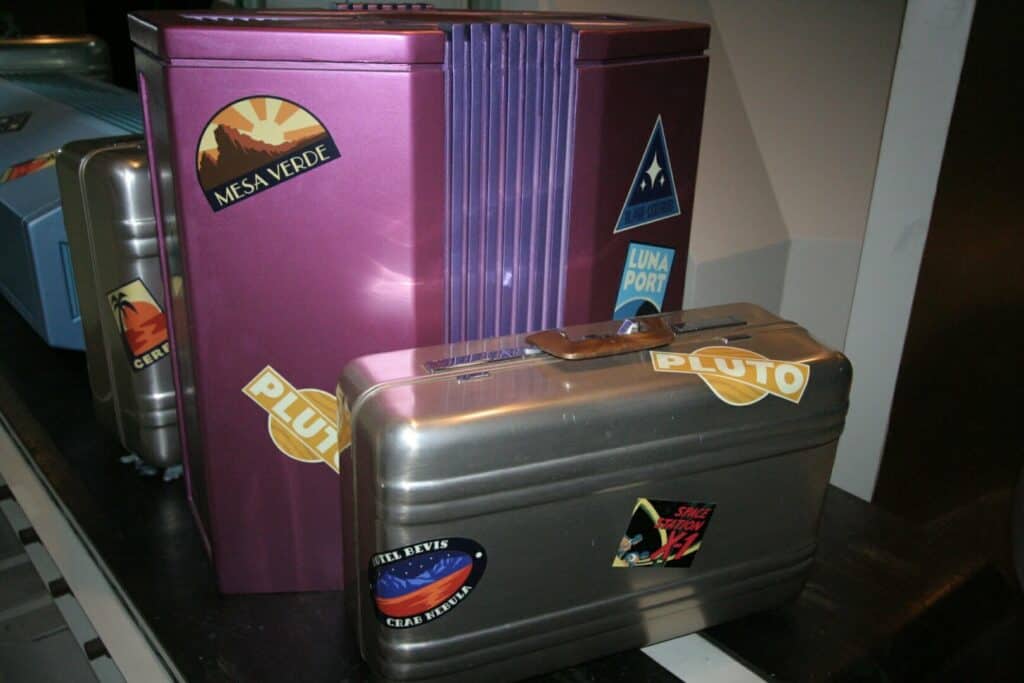 Right when stepping onto the moving sidewalk, Guests can spot a pile of luggage, including one that has a sticker for Mesa Verde. This fictional place was one of three locations depicted on Horizons, and Guests could even choose to extend their journey by learning more about the location in a choose-your-own-ending-style interaction. 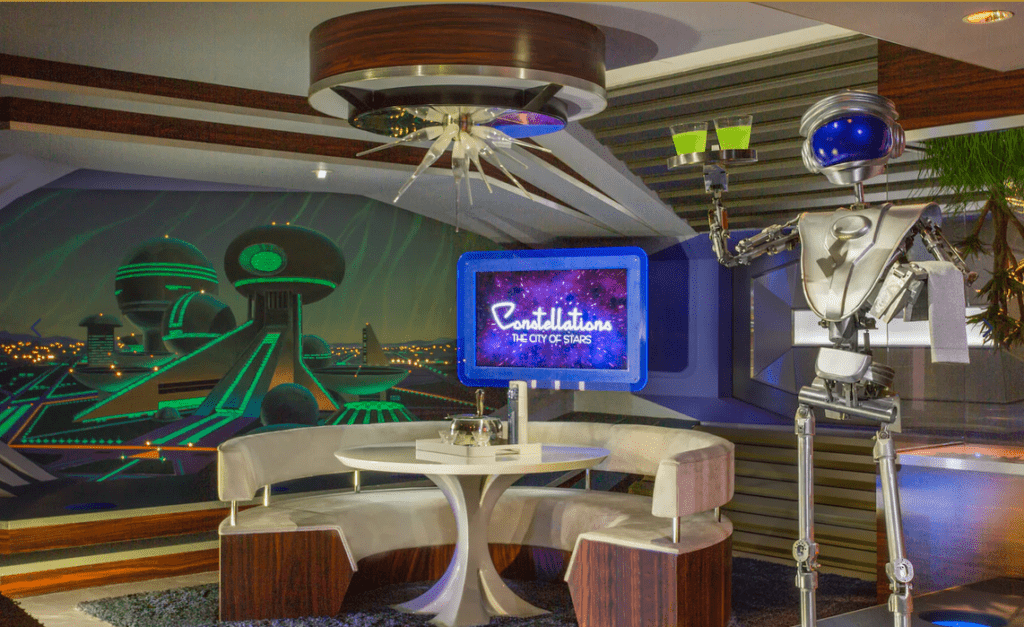 Horizons is again honored during the post-show scenes on Space Mountain in a futuristic bar named Constellations The City of Stars, complete with a robot butler offering up some neon green beverages on a tray. A butler robot could also be found in one of the original Horizons scenes vacuuming a household floor, and this subtle nod is a great way that Walt Disney Imagineering places references to the past in current-day attractions!

Have you ever noticed any of these wonderful details on Space Mountain? Be sure to slow down and soak in all of the wonderful theming on any visit to Tomorrowland in the Magic Kingdom!