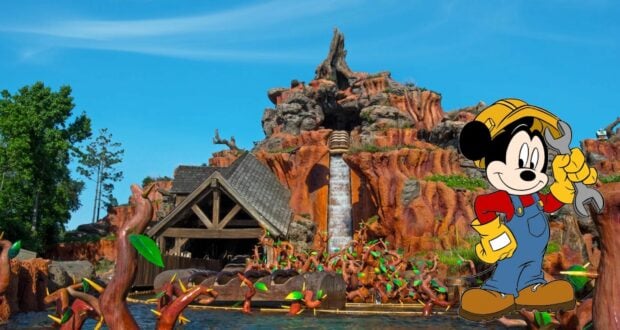 If you’re planning a visit to Walt Disney World Resort in the near future, it’s always good to know which attractions and experiences may be closed for the duration of your vacation. This way you know not to get your hopes up for riding a Disney Park attraction that won’t be available. With that in mind, take note that Splash Mountain is now closed for refurbishment.

Just recently we shared the Walt Disney World Resort January 2022 list of refurbishments. One of the biggest attraction refurbishments currently underway is Expedition Everest at Disney’s Animal Kingdom Park which is closed into mind-April 2022.

Over at Magic Kingdom Park, the Walt Disney World Railroad is still closed due to the TRON Lightcycle Run coaster construction which doesn’t seem to have an end in sight. Now, you’ll want to be aware that the popular Magic Kingdom boat ride, Splash Mountain, is currently closed for refurbishment.

When the retheming of Splash Mountain will take place is still a mystery, but Disney has said the attraction change is on the horizon with details revealed, as they focus on being more inclusive by removing Splash Mountain’s “Song of the South” theme.

Fan petitions have gone out in favor of the attraction’s reimagining while another went against any changes. Now, after a year and a half since the first announcement, we have yet to see any signs of the Princess and the Frog theme implemented.

Are you ready to see Splash Mountain undergo the refurbishment into a Princess and the Frog theme or do you prefer it stays as is? Let us know in the comments.