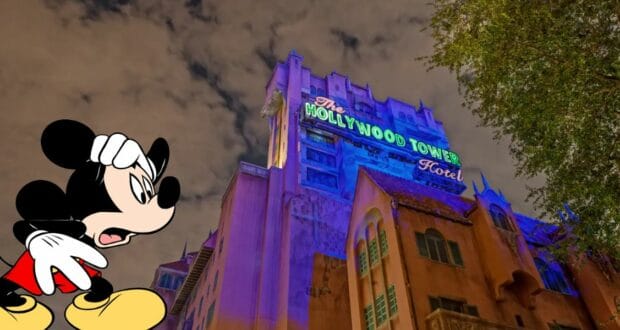 “Send Help!” Disney Guests Get Stuck on Tower of Terror

Some may believe visiting Walt Disney World Resort is all pixie dust and rainbows, but every now and then, maintenance issues happen, and rides do break down. One Disney Park Guest recently found herself stuck on the Twilight Zone Tower of Terror for 30 minutes.

Looming over Disney’s Hollywood Studios, the stunning Twilight Zone Tower of Terror is a fan-favorite for those seeking a frightfully fun thrill. Disney opens the 5th dimension as those brave enough to ride hurtle up and down aboard a haunted elevator-style lift.

RELATED: Book a Night Inside the Infamous Tower of Terror Attraction at Hollywood Studios?

And while the attraction sends stomachs churning, being stuck on the ride for 30 minutes would take the eerieness level of the ride to new heights.

Megan (@moolou_) took to social media to share a series of videos sharing the story of how she got stuck on the Tower of Terror on December 10, 2022. The first video shows Guests stuck in the Tower of Terror ride vehicle, with the emergency lights on and Disney fans making small talk to pass the time:

In the second video, Megan notes, “They pulled our elevator to this backstage room and gave us some lightning lane passes meanwhile I’m traumatized for life Lmao. We are all okay and happy to be back on ground. It only lasted about 30 minutes!!” Check out the video below:

Megan additionally takes to social media to share a video story of the experience, including how Cast Members regularly checked on the Disney Guests stuck in the ride vehicle and talked them through the arrival of Disney’s maintenance:

Yikes! We, too, would be “traumatized” by getting stuck on the Tower of Terror. Thankfully, Disney worked to release the Park Guests safely from the attraction as timely as possible.

If you’ve never experienced the Twilight Zone Tower of Terror at Disney’s Hollywood Studios, Disney describes the attraction with the following:

“Step uneasily inside the infamous Hollywood Tower Hotel and find a dusty lobby frozen in time. Even the subdued hotel staff seems strangely out of another era.”

“Suddenly a television set springs to life and Rod Serling welcomes you on a journey into the Twilight Zone. He reveals that on a gloomy Halloween night in 1939, some hotel patrons were riding the elevator when a violent storm struck the building… and they were never seen again. The hotel closed down and has stood empty ever since.”

“Going Up? Enter the rickety, elevator-style lift, strap yourself in and prepare to discover what lies beyond the darkest corner of your imagination.”

“Shriek in terror as you’re suddenly propelled up and down the abandoned shaft—unexpectedly dropping and rising—as you hear the sound of cables snapping and metal clanging overhead. Will you make it back to the real world… or will you become a permanent resident of the Twilight Zone?”

Currently, the Tower of Terror is back to its normal operation. As always, we will continue to keep Disney Dining readers updated on recent closures and breakdowns at Walt Disney World Resort.

2022-12-20
Jamie Sylvester
Previous: Disney Experiences We Hope to See Return In 2023
Next: An Inside Look at Bob Chapek’s Final Days at Disney