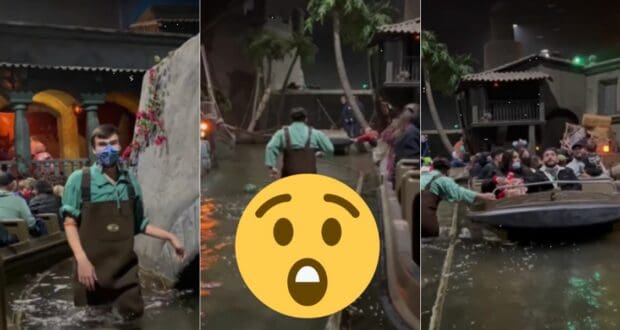 VIDEO: Guests Stuck for Hours as Disney Attraction Breaks Down

As much as we like to believe Walt Disney World Resort and Disneyland Resort are filled with nothing but magic and pixie dust… sometimes hiccups happen – as is the case with this Disney Park incident.

Despite the upcharges and price hikes at both Walt Disney World and Disneyland, crowds are still flocking to the theme parks to make memories. It’s inevitable that with the vast number of people visiting the Parks daily, mishaps will occur no matter how much maintenance is provided on the numerous Disney attractions.

We’ve seen some iconic rides, such as Disney’s Splash Mountain, struggle recently with animatronic errors and boat sinking issues as Disney prepares for its massive overhaul of the attraction to “Tiana’s Bayou Adventure” coming in 2024.

And now, Disneyland Park’s Pirates of the Caribbean is at the center of attention… and this time, it’s not because of Johnny Depp (Captain Jack Sparrow). A Disney Guest videoed an interesting, necessary evacuation from the Park ride.

RELATED: The Disney World Ride No One Talks About

@eat.sleep.positivity took to social media to share, “We broke down on Pirates. Was stuck there for 2 hours. Watch till the end to see how we got off!!” You’ll see in the clip that the break down required Cast Members to wade into the Pirates of the Caribbean water to push boats filled with Guests toward the exit.

Furthermore, Guests had to hurdle over the ride vehicle seats to reach a standing place to evacuate. Check out the video below:

Can you imagine?! Especially the thought of being stuck for a full two hours in the middle of a Disney Park day. We hope at least the audio for “Yo Ho, Yo Ho, A Pirate’s Life for Me” was turned off!

We are sure Disney worked to ensure these Guests received Lightning Lane passes for other attractions with all the time spent during the ride evacuation.

2022-10-24
Jamie Sylvester
Previous: Comedian Leslie Jordan Dead at 67 After Car Crash
Next: The Most Fascinating Disney World Attraction Ever is One Guests Are Not Allowed to Experience