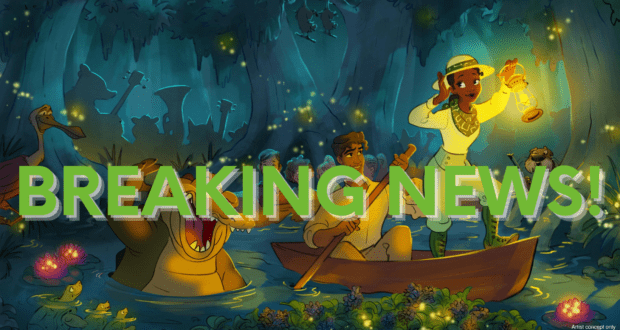 We’ve been anticipating the reimagining of the Splash Mountain attraction at Walt Disney World and Disneyland, and today, we’ve got more exciting news to share about the all-new experience that was first announced in the summer of 2020.

Today, we’ve learned that Disney reportedly announced details about the new attraction during the ESSENCE Festival of Culture 2022.

We have also learned that Tiana’s Bayou Adventure is projected to open to Guests at both the Walt Disney World Resort and the Disneyland Resort sometime during late 2024, according to ITM.

In June 2020, when the reimagining of the attraction was first announced by Disney Parks, Disney Parks Blog had this to say about the new experience:

The theme is inspired by an all-time favorite animated Disney film, “The Princess and the Frog.” We pick up this story after the final kiss, and join Princess Tiana and Louis on a musical adventure – featuring some of the powerful music from the film – as they prepare for their first-ever Mardi Gras performance.

Tiana is a modern, courageous, and empowered woman, who pursues her dreams and never loses sight of what’s really important. It’s a great story with a strong lead character, set against the backdrop of New Orleans and the Louisiana bayou. In 1966, Walt himself opened New Orleans Square when it became the first new “land” added to Disneyland Park, so it feels natural to link the story and the incredible music of “The Princess and the Frog” to our parks.

It remains to be seen how Disney will choose to tell the exciting story of “Tiana’s Bayou Adventure!” We will keep you updated as more details are announced about this new experience at Disney World and Disneyland!