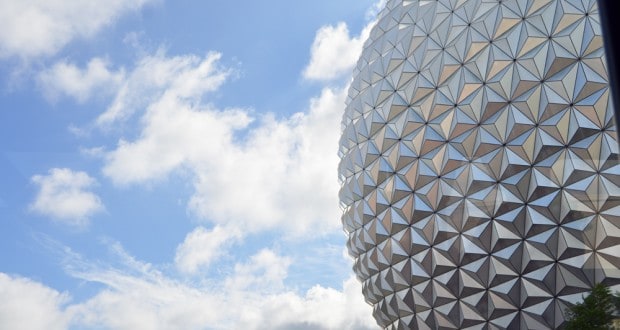 On Monday, July 19, my daughter and I finally returned to EPCOT. It was the last park that I had visited before the closure, and I was anxious to go back. I had heard of a few problems from reopening day, so a small part of me was nervous. I had seen people use a face covering loophole several times at Disney Springs. I knew that the policy had since been updated, but whether or not people followed the rule might be a different story.

I am pleased to say that people did indeed follow the new rule. It states, “Face coverings are to be worn at all times except when actively eating or drinking while stationary and physically distanced”. Simply put, that means no more walking around and sipping a drink so that someone doesn’t have to wear a mask. There are signs all over World Showcase to let people know of the policy, and we also saw Cast Members carrying signs that were reminders. EPCOT was empty, so finding a place on the side to eat or drink was not difficult at all.

Wait Times were short. We waited for 20 minutes for Test Track, which was posted as a 40 minute wait. Everything else that we rode was walk on. Frozen Ever After was down when we stopped by and we didn’t go back, so that could have been an exception. The interactive areas were all closed off, and we did not get to design our own concept car. There are physical barriers on some of the seats on Soarin’, so even if you are next to someone you aren’t too close. Disney continues to do a remarkable job of social distancing in the queues.

There are Character Cavalcades that go around World Showcase. We saw Mickey and Minnie, Anna and Elsa, and several princesses. There are markers on the side in some areas so that parties will not stand too close to each other. I like the cavalcades more each time I see one. The characters really pay attention to the people who are watching. It feels very personalized.

My favorite part of our day was when we saw Winnie the Pooh. He was hard to find, a wonderful Cast Member named Shelby helped us to locate the area. It’s kind of behind and to the right of the Imagination Pavilion. Look behind The Land Cart as well. We saw Winnie the Pooh with a butterfly net, and for a few moments all was right with the world. Joy also appears in the area, but we didn’t see her.

One attraction that was near the top of my list was The EPCOT Experience. This is a great place to get a glimpse at the future of the park, and to enjoy some AC at the same time. The attraction has been updated, the refurbishment to Spaceship Earth and the section about Cherry Tree Lane are both gone. Previously there were some picture opportunities inside the building, and those seem to have been removed as well. It’s still worth a stop, I see something new each time I watch it.

Currently EPCOT is hosting the Taste of EPCOT International Food & Wine Festival. This is a much scaled down version of the fall classic. We decided that we are going to return to the park later this week to better experience the festival. We wanted to just enjoy being back for a few hours. Since Disney has made it easier for Annual Passholders to get Disney Park Pass reservations, it’s now possible for us to return and just focus on the festival.

The Remy topiary from the Flower & Garden Festival is still in France. Since this was Remy’s first appearance Disney made the smart decision to keep him there, so that more people can see him. Seeing the topiary made me excited for Remy’s Ratatouille Adventure. There’s still no official word on when the new ride will open.

EPCOT has always been filled with live entertainment, and there is currently a hole. With the International Program suspended, the performers are currently all over the world. There is still some live entertainment. We watched both the JAMMitors and Mariachi Cobre in the America Gardens Theater. There were plenty of shows throughout the day, and the acts performed with the same passion that they always have. The theater was a nice place to sit for a while as well. Since we were stationary and physically distanced, we sipped on ice water without breaking any rules.

I finally was able to eat at Regal Eagle Smokehouse! We had made plans for an EPCOT day in March, but then everything fell apart and it never happened. This was probably the longest that a Mobile Order has taken for us, but the food was worth the wait. We ordered one sauce when we placed the order, but when we picked up the food they offered us small containers of the other three if we wanted to try them. The restaurant was spotless, and the Cast Members helpful. Not only were tables blocked off to keep people apart, the tables that weren’t to be used didn’t have benches at them. It was a simple, but clever and effective idea.

One thing that has been lacking since the Walt Disney World theme parks reopened is the beauty of Disney after dark. Who doesn’t love the colors on Cinderella Castle, or want to wander through Pandora once the sun has gone down? Fortunately, EPCOT is open until 9:00 each evening. That meant that we were able to see the glorious colors on Spaceship Earth. While it was strange to not see fireworks, it was still nice to see the sun go down, and watch the park transform from day to night. Seeing Spaceship Earth lit up made the day feel complete.