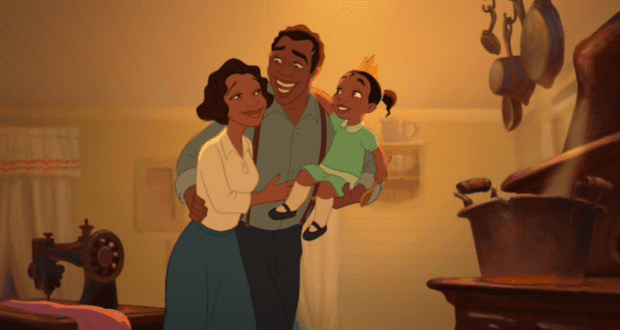 The Princess and the Frog is one of my favorite Disney animated movies, but I must admit, it annoys me a bit when people discuss it. The film is full of depth and meaning, but most people’s takeaway is all wrong. The moral of the film has nothing to do with hard work. I can hear the names you’re calling me in your head, but I’m not delusional. Let me explain. The real moral of the story is that family is what matters most. This is a lesson Tiana struggled with because, like many of us, she was taught to believe in her dreams above all else. While there’s nothing wrong with that usually, Tiana took it to an unhealthy extreme. Her focus and single-minded obsession were not meant to be the standard we should hold ourselves; it was meant to be a warning. Towards the beginning of the movie Tiana and her father make gumbo and talk about their future restaurant. He explains to her that good food makes people happy, and that’s why he wants to open “Tiana’s place.” Later as she’s going to bed, she wishes on a star for their restaurant. This is where her father tells her that wishing can only take her part of the way. Hard work must do the rest. This is where most people stop. Like Tiana, they take those wise words to heart and forget the rest of that quote: “just promise your daddy one thing, that you’ll never ever lose sight of what’s really important.” How he looks at Tiana and lovingly grabs her mother’s hand shows the viewer what’s important, in his mind, is not the material or tangible goals… it’s love and family. This is a point if conflict throughout the movie and Tiana struggles to learn this.

The song “When We’re Human” shows the viewer that Tiana did not understand the promise her father asked of her. She, like most viewers, only understood the first part: “I worked hard for everything I got
And that’s the way it’s supposed to be
When I’m a human being
At least I’ll act like one
If you do your best each and every day
Good things are sure to come your way
What you give is what you get
My daddy said that, and I’ll never forget
And I recommend it to you” It’s not a bad outlook. It just missed the point.

Two terms in writing illustrate this point: “fatal flaw” and “hamartia.” A fatal flaw is a writing concept most are familiar with. The website writershelpwriters.net defines a fatal flaw as “In the scope of fiction, every protagonist has a fatal flaw that highlights an inner deficiency that keeps them from feeling happy and fulfilled. At the start of your story, the character is somehow stuck, unable to grow, move on or succeed, or his life is lacking in some way. A fatal flaw stands in his path, keeping him from being complete and whole. Often the character is blind to their fatal flaw or mistakes it as a strength.” That’s our girl, alright! A fatal flaw is a literary device to create conflict. Most of us are probably familiar with the term fatal flaw. In fact, we’ve probably used it to describe people we know.  Hamartia, however,  may be less familiar. The word is usually found in literary criticism, and since you’re not all nerds like me, I can’t imagine that’s something most people spend their time reading. It’s a Greek word that means “to miss the mark” or “to err.” This literary device is more or less the same as a tragic flaw, but it goes a little further- hamartia causes the hero’s downfall either temporarily if it can be overcome or permanently if the hero does not resolve the flaw. Mama Odie knew this, as she soon proves. 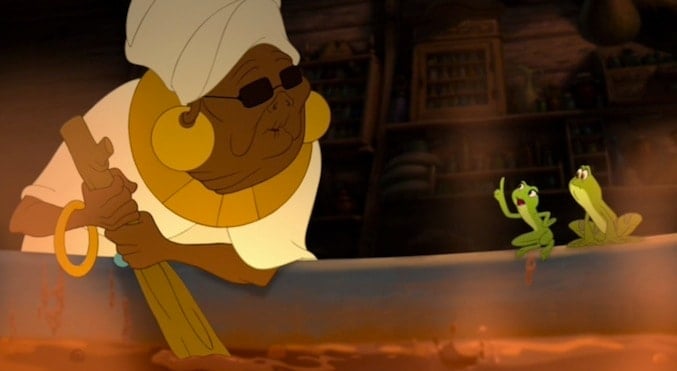 In her catchy musical number, Mama Odie spells out Tiana’s tragic flaw in no uncertain terms. In fact, it is so glaringly apparent that I wonder how the point is missed. Read the lyrics without the catchy tune and visuals for distraction:

“Miss Froggy, might I have a word?
You’s a hard one, that’s what I heard
Your daddy was a loving man
Family through and through
You your daddy’s daughter
What he had in him you got in you
You got to dig a little deeper
For you it’s gonna be tough
You got to dig a little deeper
You ain’t dug near far enough
Dig down deep inside yourself
You’ll find out what you need
Blue skies and sunshine guaranteed.”

Pretty on the nose, isn’t it? For the rest of the movie, Tiana is trying to figure out what Mama Odie meant so that she can turn herself back into a human. She gets it wrong several times. It’s not until she surrenders to life as it is rather than how she wants it to be that she can truly break free. She resigns herself to life as a frog and makes the best of it; she married Prince Naveen and, in so doing, became a princess. When he kissed her, it broke the spell, and the pair was human again. No amount of hard work was able to get Tiana out of that one. It was love. Their love proved another literary device- antithesis. This word means “contrast or opposite.” In the film, Naveen was Tiana’s opposite in every way. Carefree, irresponsible, and fun-loving, he lived each day for pleasure and had no purpose or larger goal. The unlikely pair, to use a cliche, completed each other. Tiana gives Naveen a sense of purpose and responsibility, while Naveen teaches Tiana not to sweat the small stuff and enjoy her life. They create an undeniable balance. Which helps each of them overcome their fatal flaw.

The movie’s message is neatly tied up with a bow and packaged to audiences toward the end when Tiana finally gets to her restaurant and says she wishes her father could have seen it. She said, ” My daddy never did get what he wanted. But he had what he needed. He had love! He never lost sight of what was really important. And neither will I!” 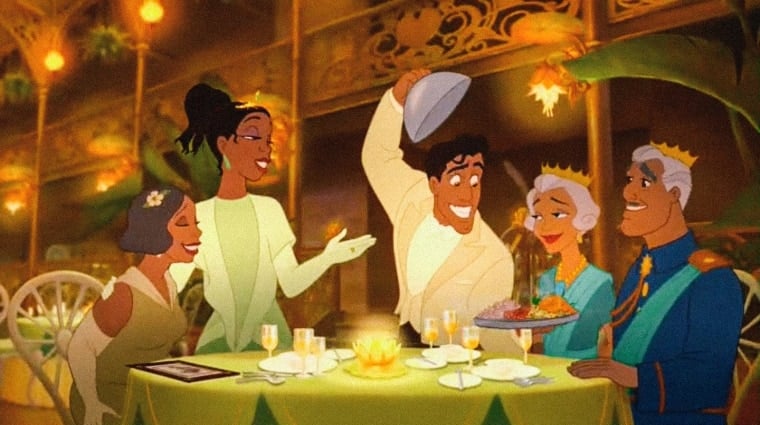 This film brought together fantastic music, unforgettable characters, a return to hand-drawn animation, a happy ending, and a plot with depth and substance. Soon it’ll have it’s very own ride as well!  You can’t ask for much more than that! Now go hug a loved one, and don’t forget what’s truly important today! Blue skies and sunshine guaranteed!