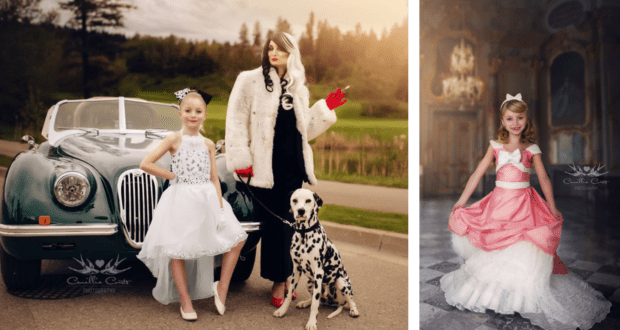 Once upon a time, photographer Camillia Courts and her family visited a Disney Park, and while many families splurge on souvenirs, sodas, snacks, and silliness, this mom and daughter duo brought home something from the parks that never grows old, never expires, never sours. Camillia and her daughter brought home a spark of Disney inspiration, and they’ve been cultivating it ever since. 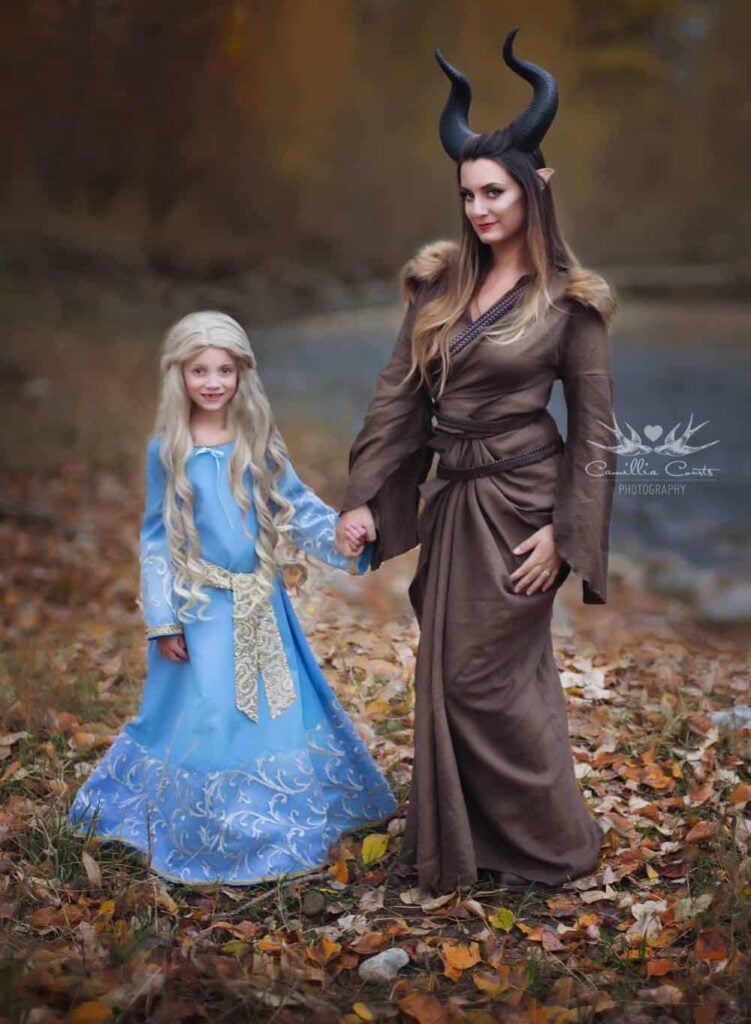 The mother and daughter hail from Canada and began their journey as self-proclaimed “character artists” years ago after visiting the Disneyland Resort in California. At that time, Camillia’s daughter Layla was only 5 years old.

They began conducting a “magical princess photo session” each month. Clearly, mom Camillia is an accomplished photographer. She has a brilliant gift for coupling her talents as a photographer with an obvious affinity for magic and fantasy, as seen in the many Disney Princess-themed photos she has produced. These aren’t your average, run-of-the-mill little girl princess photo shoots in someone’s backyard. Not by a long shot. 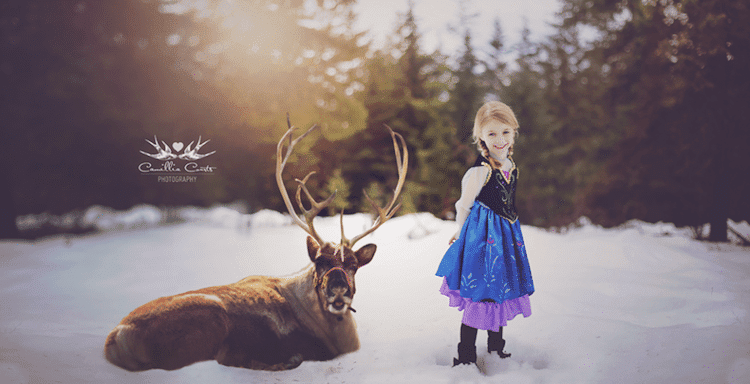 Layla as Princess Anna, along with Sven, from Disney’s “Frozen”/Credit: Camillia Courts Photography

During the family’s 2014 trip to Disneyland, Camillia and Layla experienced some very magical mother-daughter bonding time at Disney’s Bibbidi Bobbidi Boutique. A photographer at heart, Camillia had her camera in hand as she witnessed Layla’s transformation from a wide-eyed, magic-believer 5-year-old to Queen Elsa from Disney’s 2013 Frozen.

Camillia posted the photo of Layla dressed as Queen Elsa on her Facebook account, and the response was overwhelmingly positive and supportive from her family and friends, causing Camillia to become even more inspired.

It was then that she decided to take the Disney Princess photos of her daughter Layla a big step further: she would create a photography series, featuring Layla as various Disney Princesses and other characters. (And occasionally, Mom would get in front of the camera as well!) 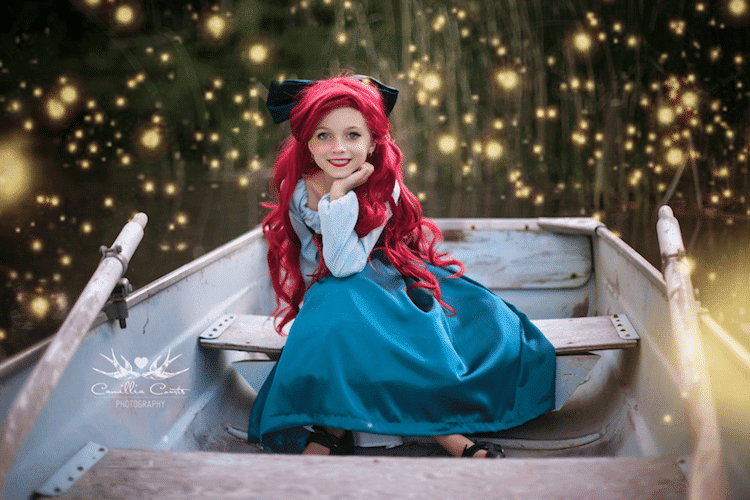 The results are absolutely breathtaking and bring these characters to life in a way that’s never been captured before. Camillia’s magical, enchanting photography series is titled, “The Magical World of Princesses,” and the beautiful photography speaks for itself. 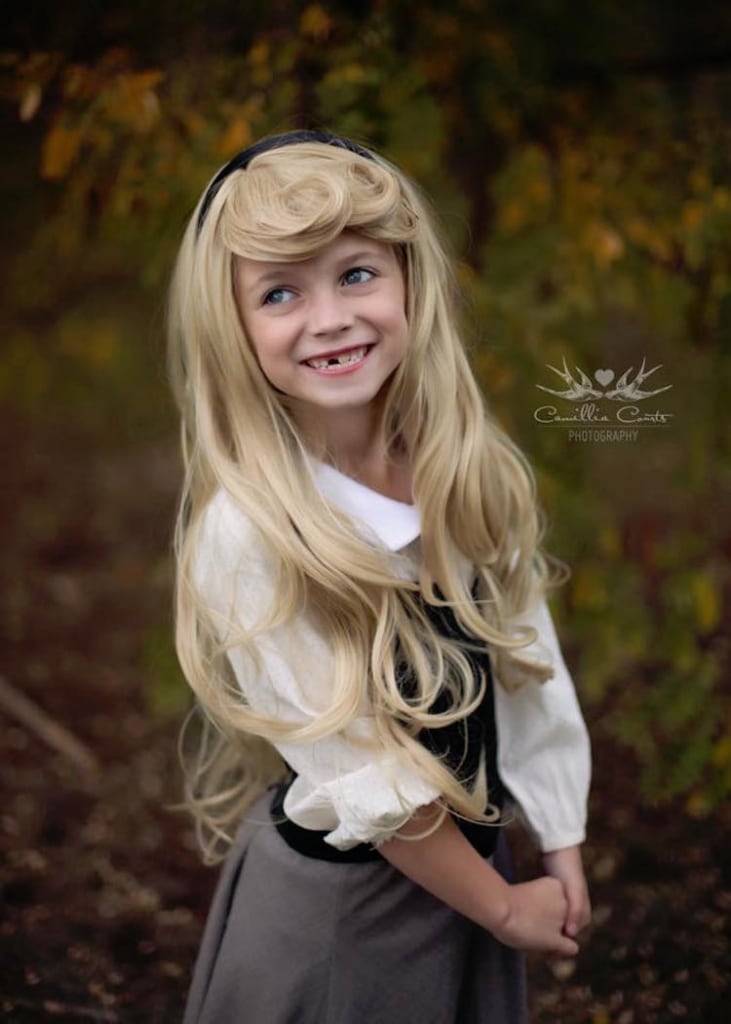 Each photo in the fantastical series features Layla in gorgeous costuming with intricate attention to detail, as well as beautifully-styled wigs, giving Layla an unmistakable Princess aura about herself. 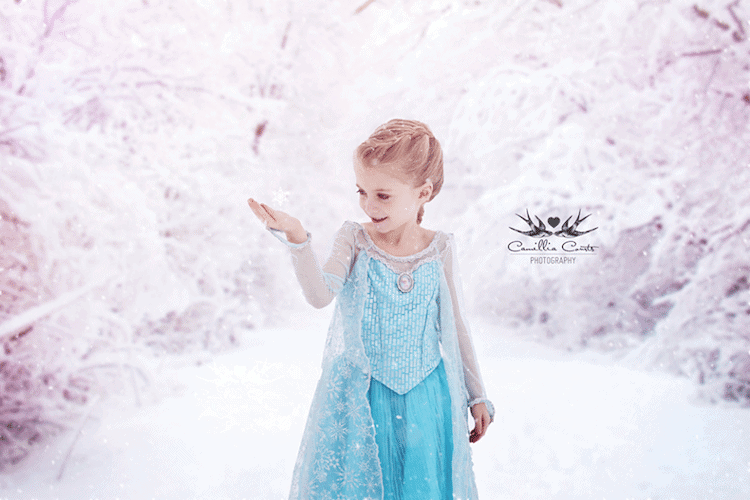 “It’s been such a fun way to document my daughter growing up and wonderful time spent together,” Camillia explained during an interview for MyModernMet.com. “We love to dress as Disney characters.”

Camillia says the photos have been featured on The Huffington Post, HelloGiggles, CTV News, Bored Panda, and other outlets. 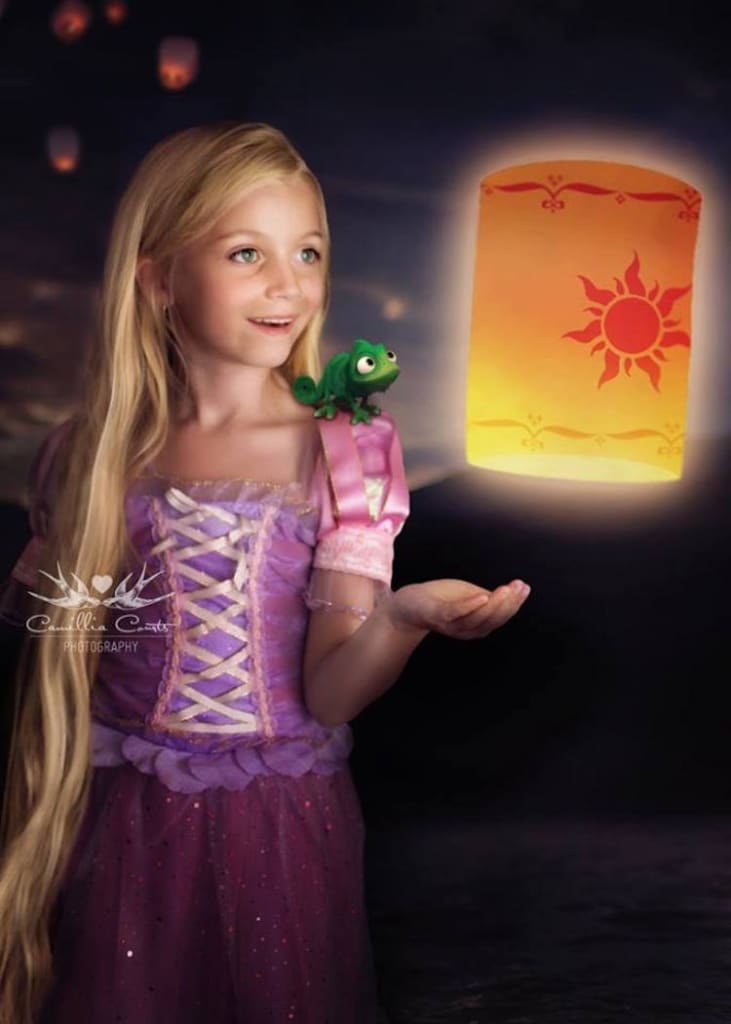 Layla’s princess dresses are both purchased and handmade (by a seamstress locally). Her costume wigs range in style, color, and length, depending on the Disney character she’s portraying in each photo. But even though Layla is the star in most of the photo shoots, she isn’t the only subject of the photographs.

“Every once in a while, I like to get in on the fun, and I think being the villain is way more fun than wearing the crown,” Camillia said. “I have a fantastic makeup artist named Missy MacKintosh who has transformed me into Maleficent (from Disney’s Sleeping Beauty), The Evil Queen (from Disney’s Snow White and the Seven Dwarfs), and my favorite, Ursula (from Disney’s The Little Mermaid).” Layla as Ariel and Camillia as Ursula from Disney’s “The Little Mermaid”/Credit: Camillia Courts Photography

RELATED: A “Little Mermaid”-inspired drink concoction at Disney World has us rethinking our affinity for drinking and for the film itself

Admittedly, Layla’s favorite character for her mom to embody is Ursula; she loved watching her mother pose while covered in all that purple paint. But Camillia also plays a mean Evil Queen from Snow White and the Seven Dwarfs. Layla as Snow White and Camillia as the Evil Queen/Credit: Camillia Courts Photography

The mother-daughter duo has also portrayed other Disney-inspired duos as well, like Megara and a female take on the evil villain Hades from Disney’s Hercules and 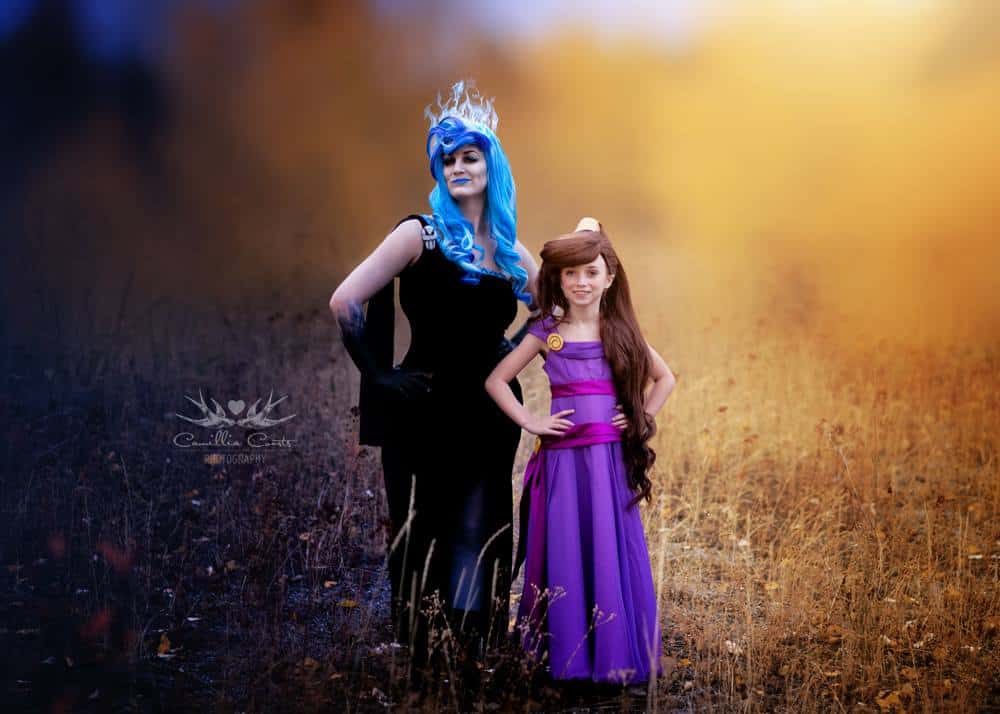 Layla as Megara and Camillia as Hades from Disney’s “Hercules”/Credit: Camillia Courts Photography 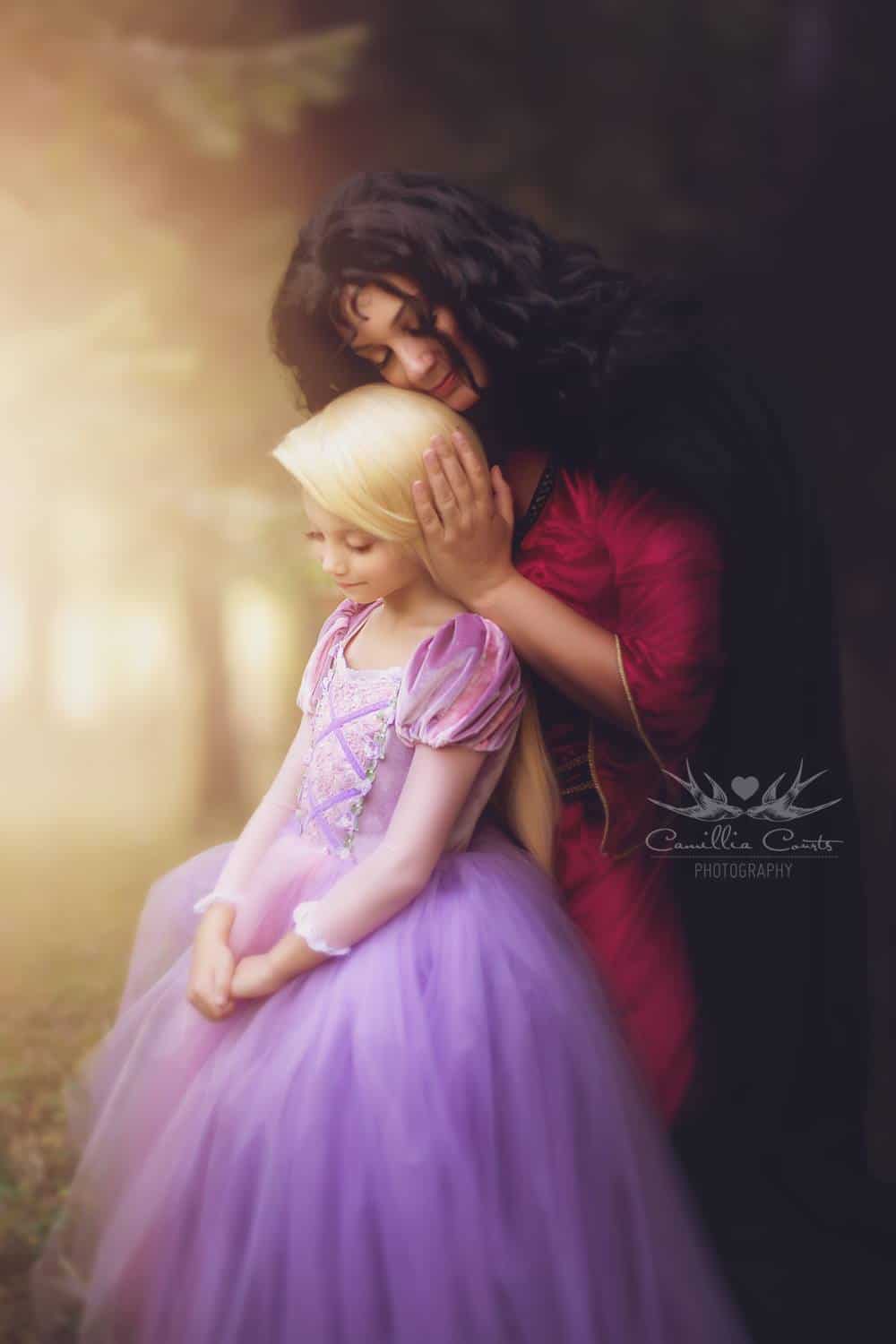 Camillia and Layla have even donned elaborate costuming to portray the evil Cruella DeVil and a new character from Disney’s 101 Dalmatians. The props for the Dalmatians photo session even included a beautiful dalmatian and an equally gorgeous emerald green Rolls Royce.

READ ALSO: Enough with the Disney Remakes Already! Walt didn’t approve of them, and we have the Proof! 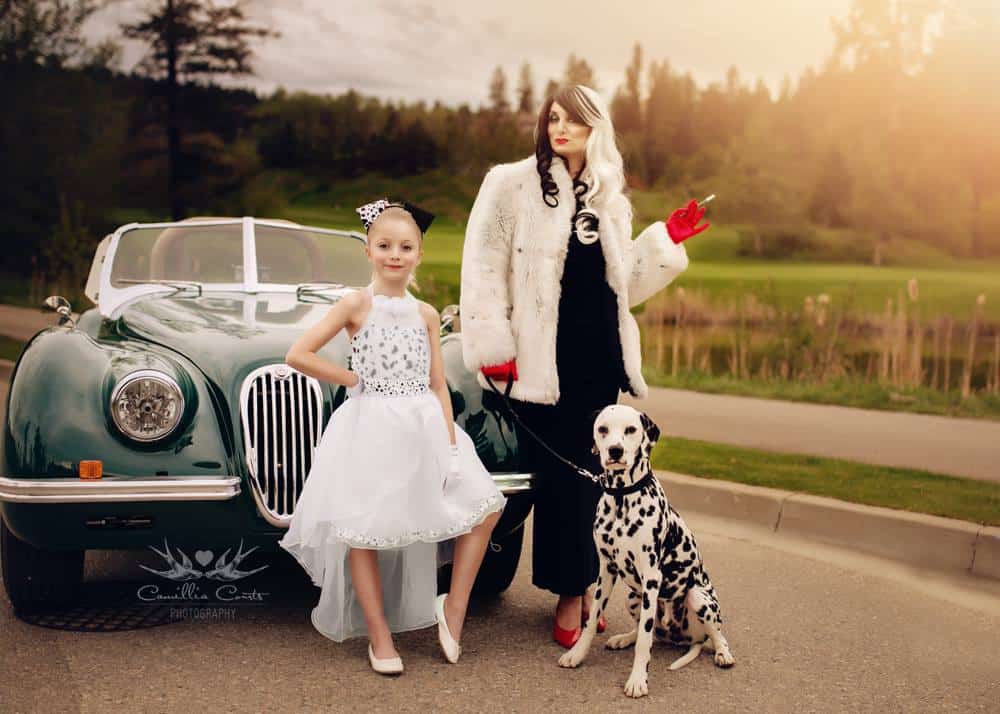 “The Magical World of Princesses” photo series may look like a glorified dress-up party, but according to Camillia, it’s so much more than that.

“[Layla is] a very shy child, and I see her light up when she gets into costume,” gushed Camillia about her adorable daughter. “She’s gained a lot of confidence since we started the project and has really come out of her shell.” 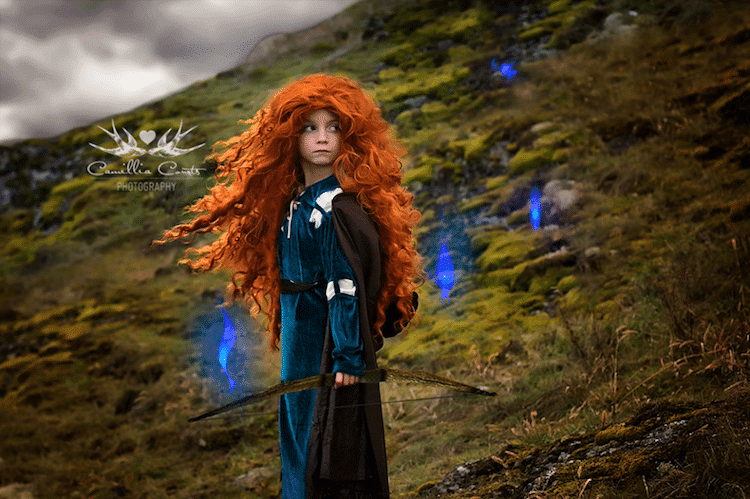 Camillia also shared how special it has been to have the opportunity to bond with her daughter as she seemingly documents a part of her childhood, which Camillia knows is fleeting. 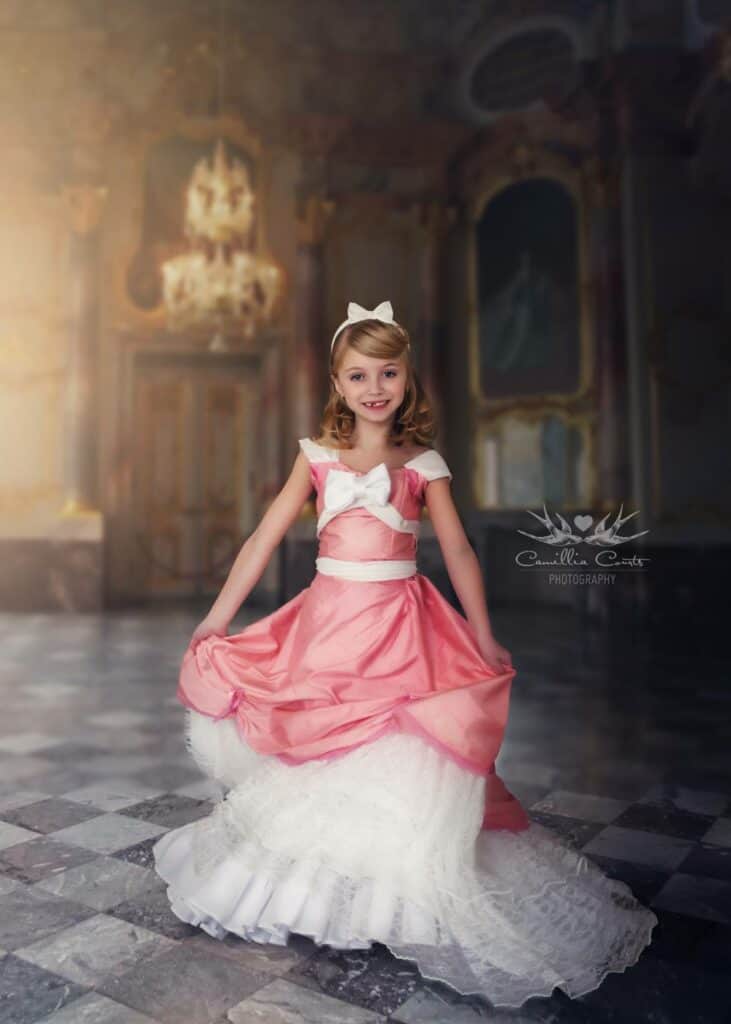 Layla is Cinderella, ready for the ball/Credit: Camillia Courts Photography 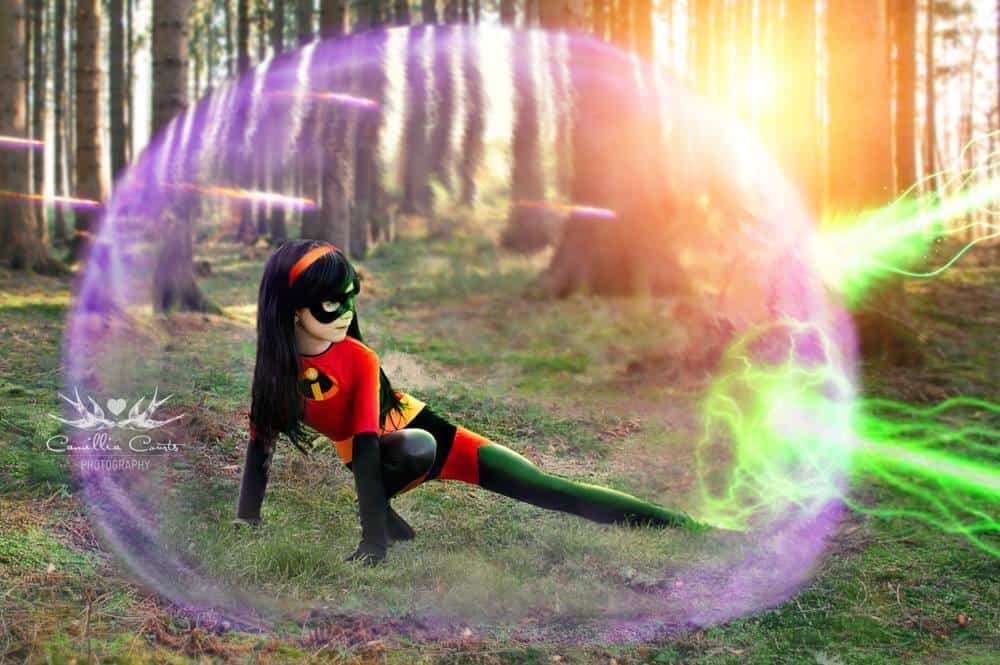 Layla feels her superpowers as Violet from PIXAR’s “The Incredibles”/Credit: Camillia Courts Photography 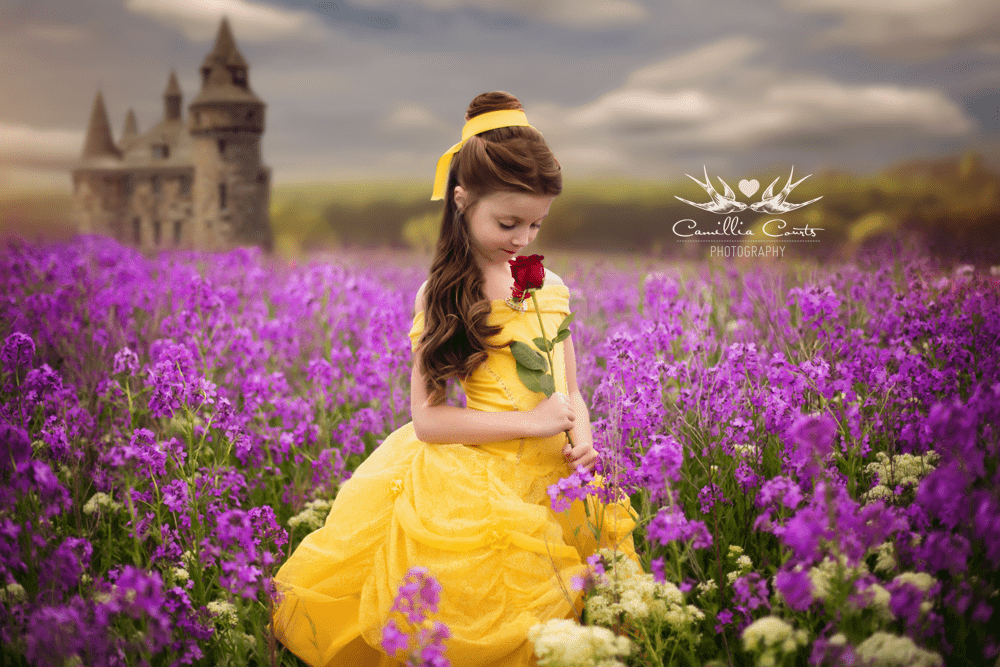 Layla dressed as Belle from Disney’s “Beauty and the Beast” against a backdrop of purple flowers and Beast Castle in the background/Credit: Camillia Courts Photography

“It’s really very special, and even if she wanted to quit tomorrow, I will look back on how much fun we had playing dress-up,” Camillia said. “It’s truly been magical.”