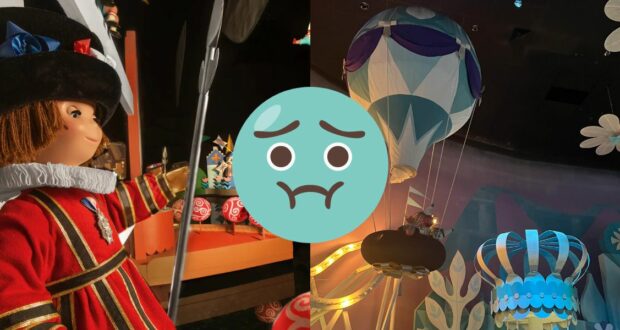 What’s Growing on the Ceiling of This Iconic Magic Kingdom Attraction?

Head on over with us to Walt Disney World Resort, where the iconic Magic Kingdom attraction “it’s a small world” welcomes Guests to “The Happiest Cruise That Ever Sailed.”

Unfortunately, “it’s a small world,” located in the Fantasyland portion of the theme park is getting some new recognition… but not in the way one would hope.

Video and photos show a possible mold infestation taking over the iconic attraction that has social media talking.

We captured a video of what we believe are the “creepy clowns” that drop down above the Guests seated in the “it’s a small world” ride vehicle.

The video focuses on the attraction clowns, but can you spot what looks like discoloration in the upper right-hand corner? Is it mold growth? Check out the video below:

RELATED: This “it’s a small world ” Fan Theory Will Creep You Out

While a mold problem was not on our minds while enjoying the 10-minute boat ride journey through all 7 continents, surrounded by hundreds of animatronics, it appears Disney may have an issue.

u/RegularDiver8235 took to social media to post two photos, including the note, “It’s a small world at magic kingdom is looking atrocious. Does anyone know what this is?”

As you can see in the photo above and below, much like what the video captures, there is discoloration which is believed to be mold growing on the ceiling and wall of the iconic Magic Kingdom Park attraction.

RELATED: Guest Decides to Cool Off Foot In “it’s a small world”

Many of the comments believe it is mold growing, stating, “Possibly mold. But it might just be discoloration related to the moisture in that building from the water and all the humans that pass through.” Follow-up comments note, “Lol the humans have very little to do with it. It’s the damn river that’s flowing through.”

Disney fans continue to comment by turning the possible mold situation into the attraction’s song, stating, “Iiiiiits just some mold aaaaafter all!!” Along with, “It’s a world of algae… A world of bacteria….. It’s a world of decay….”

Could the discoloration be caused by dust? Or is it really mold from the moisture of the indoor water ride? Regardless, this is one we hope Disney maintenance checks out soon.