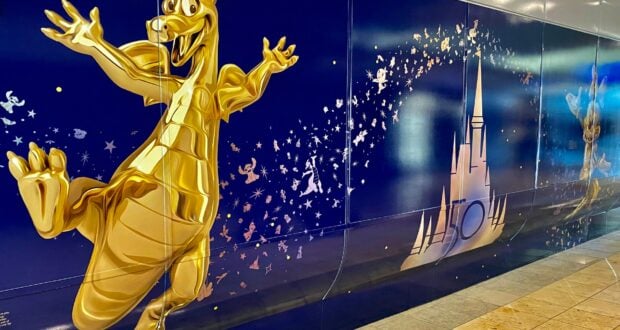 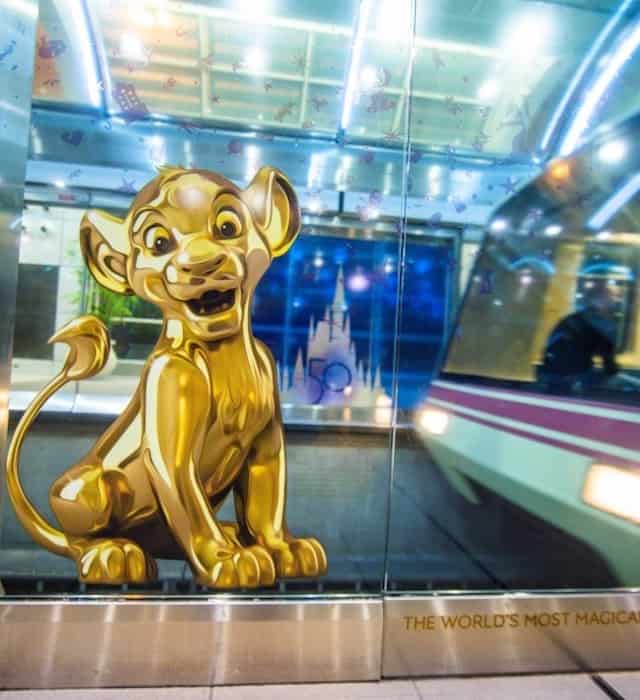 In September 2021, Disney Parks Blog announced the transformation of passenger areas at Orlando International Airport (MCO). The “Disney-fication” of the airport featured some of the character replicas from the Disney Fab 50 Character Collection, which was installed throughout the four theme parks at the Walt Disney World Resort.

There was also a photo opportunity with a giant golden teacup at the airport, inspired by the Guest-favorite attraction, Mad Tea Party in Fantasyland at Magic Kingdom. 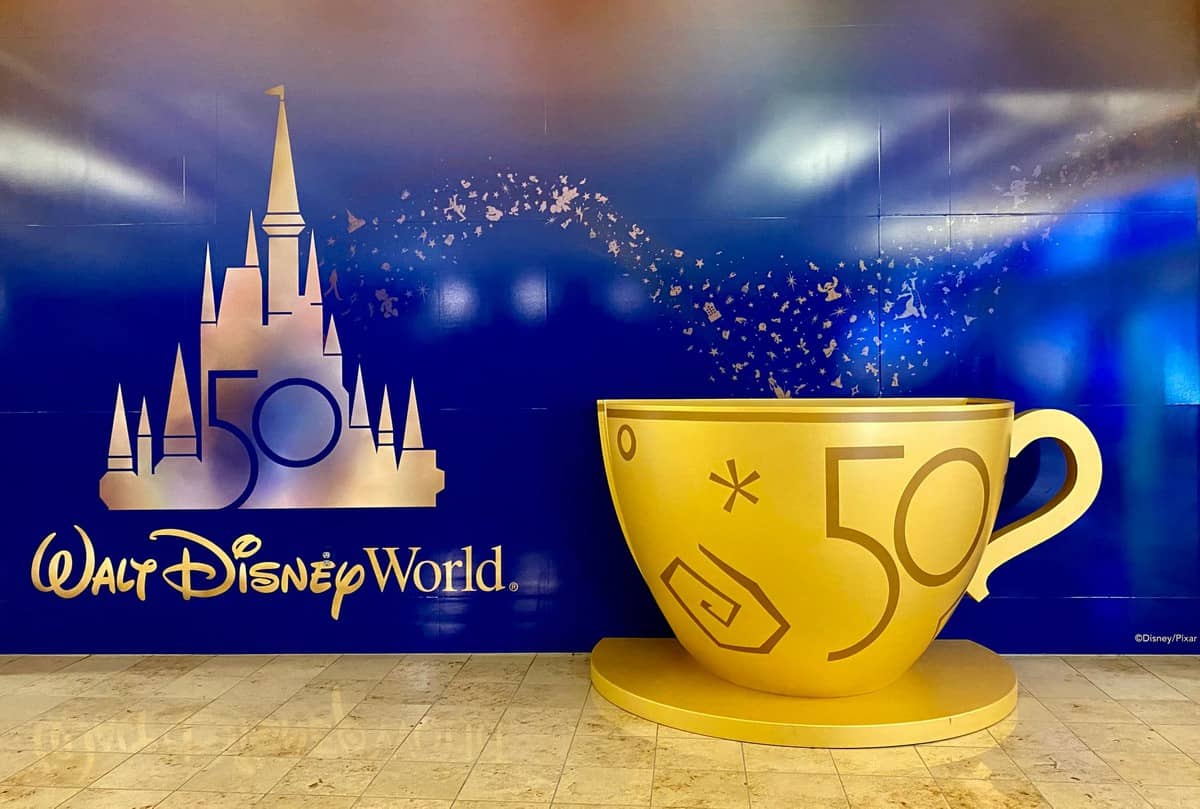 Travelers could also see EARidescent light patterns projected along the walkways through the airport terminal in the East Hall near the Magic of Disney Store. There was also a 36-foot-long video screen that featured the magical, fantastical EARidescence of the Beacons of Magic at Magic Kingdom (Cinderella Castle), EPCOT (Spaceship Earth), Disney’s Hollywood Studios (Twilight Zone Tower of Terror), and at Disney’s Animal Kingdom (the Tree of Life). 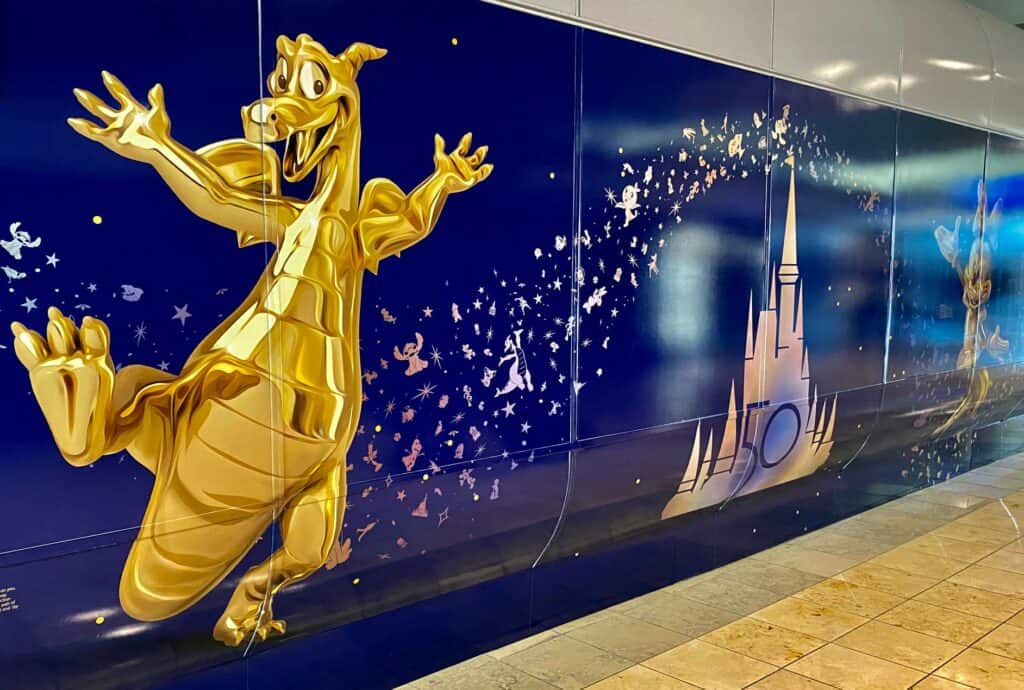 “The Walt Disney World 50th Anniversary Celebration decorations throughout our airport will start being removed tonight,” read a Facebook post late last week. “If you’re traveling through, make sure to grab some pics of your favorite pals here before they say ‘Bibbidi Bobbidi Bye!’ Though the decorations are going away, the magic is still going strong, the celebration continues and the unforgettable stories are just beginning.” 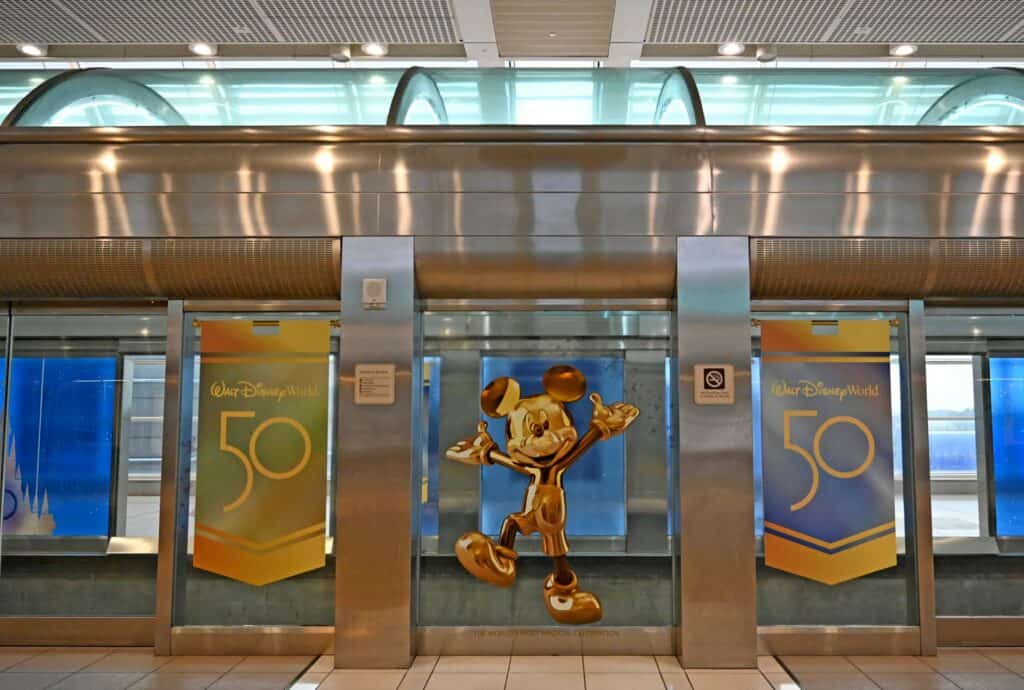 The Walt Disney World 50th Anniversary Celebration decorations throughout our airport will start being removed tonight. Make sure to grab some pics of your favorite pals here before they say Bibbidi Bobbidi Bye! 🪄 pic.twitter.com/QurlW0mMRH

Though the transformation at Orlando International Airport is gone, the celebration of Walt Disney World’s 50th anniversary–the World’s Most Magical Celebration–continues! The party will last 18 months, meaning there’s still plenty of time to get in on the festivities if you haven’t visited Disney World for the 50th yet!

2022-03-27
Rebekah Reimagined
Previous: Here’s What’s New to Stream on Disney+ This April
Next: Disney Is Hiking Up Merchandise Prices, And Not Really Hiding It