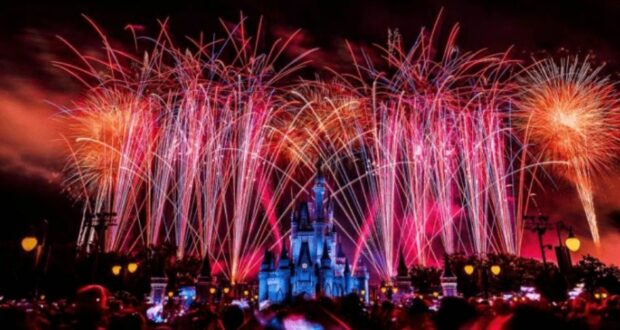 The Central Florida sun is blazing and Disney fans are flocking to the Walt Disney World Resort for a memorable vacation of a lifetime! Do you know what that means? It’s SUMMER! Disney is preparing for an extra special summer in many ways… including the return of a fan-favorite fireworks show at Magic Kingdom.

Walt Disney World Resort has already teased us Disney foodies with new summer bites available across Disney Parks and Resort. We’re also seeing so much excitement at EPCOT with Guardians of the Galaxy: Cosmic Rewind opening Memorial Day weekend and the EPCOT International Food & Wine Festival kicking off in July.

Head on over with us to Magic Kingdom Park where 50th Anniversary celebrations are in full swing! From spotting the many Fab 50 golden sculptures to watching the new Coco scene at Mickey’s PhilHarmagic, and finally getting to see the Festival of Fantasy Parade return once again – it’s a grand time to be in the Disney Park.

We recently said goodbye to Magic Kingdom’s “Happily Ever After” fireworks as the nighttime spectacular was replaced by the new show, “Disney Enchantment“. While the reviews are mixed on “Disney Enchantment” it’s still a fascinating display of projections on Cinderella Castle and Main Street, U.S.A. along with lasers, fireworks, and a beautiful musical score.

For two nights, however, Disney Enchantment will take a break as Disney has revealed the return of “Disney’s Celebrate America! – A Fourth of July Concert in the Sky”. That’s right – snag those Park Pass reservations now for July 3 and July 4 as Magic Kingdom will be a busy welcoming Guests to watch the memorable fireworks in honor of Independence Day.

The last time “Disney’s Celebrate America! – A Fourth of July Concert in the Sky” was performed was in July 2019. Now, in 2022, we’ll finally see its grand return as the show will be performed on Sunday, July 3, and Monday, July 4, at 9:20 pm each night. Want a refresher? Here’s a video of the July 4th fireworks below:

We will be sure to reveal further July 4th celebration details as Disney releases them. Happy planning, Disney fans!

2022-05-20
Jamie Sylvester
Previous: Disney Is Expanding Outside the Walt Disney World “Bubble”
Next: “The one NOT to miss”: Disney World’s most underrated park is on deck to become its most popular