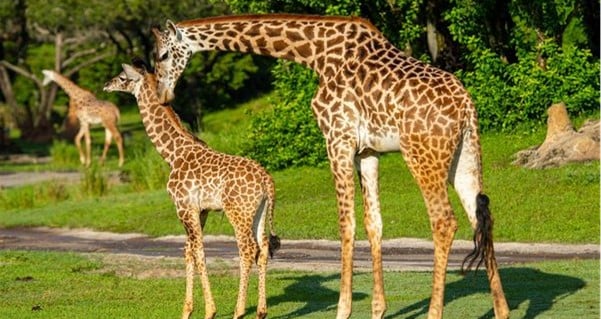 Excuse us while we fill your screen with a little cuteness… in the form of a baby giraffe! It seems like we’ve heard more and more baby news coming out of Walt Disney World recently. Two new arrivals, a baby hippo and a baby gorilla, arrived at Disney’s Animal Kingdom earlier this month. Prior to that we’ve shared baby news in with a baby boy zebra, baby girl mandrill, a baby boy rhino, and more! Now, we’re seeing Disney’s Animal Kingdom’s latest baby addition, a baby giraffe named Humphrey, join the savanna.

As shared via Disney’s Animals, Science & Environment on July 29: “Meet “Humphrey!” This morning was a special day on Kilimanjaro Safaris as our newest Masai giraffe joined his mom Lily for his very first steps on the savanna. Humphrey was born in June and has spent the last few weeks backstage bonding with mom. He’s a playful and curious little guy, and guests on Kilimanjaro Safaris can “spot” Humphrey by his unique butterfly-like marking over his right shoulder and the heart-shaped markings dotting his coat. Join us in welcoming Humphrey to the family!”

Well Humphrey, you’re absolutely adorable! Lily, Humphrey’s Mom, seems to be watching over the little guy beautifully. If you want a chance to spot Humphrey on your next visit to Disney’s Animal Kingdom, take a ride on the popular Kilimanjaro Safaris attraction. Fingers crossed you’ll be lucky enough to spot little Humphrey hanging out on the big savanna!