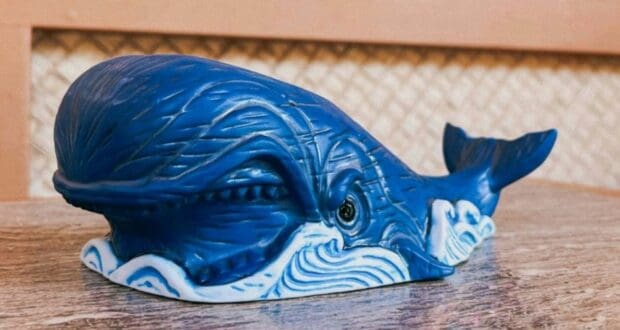 How You Can Get Your Hands on This Incredible Monstro Tiki Mug!

One of Disney’s most classic stories is that of Gepetto and his little wooden puppet, Pinocchio. Gepetto wanted nothing more than to have a son of his own, so he crafted Pinocchio, who the Blue Fairy then made a real boy. Pinocchio didn’t always make the right decisions, and Gepetto had to save him from destroying himself. In the film, both Gepetto and Pinocchio encounter a giant whale named Monstro, who swallows them as they search for each other. Monstro is undoubtedly an unforgettable character, and now Disney is bringing Monstro back into the limelight. On August 22, Disney Parks announced that they were releasing a Monstro tiki mug for a VERY limited time, and only to specific Guests. On August 26, Guests visiting Disneyland Resort will be able to mobile order the Monstro mug and pick it up at Trader Sam’s Enchanted Tiki Bar — which is located outside the Disneyland Hotel. Disney shared the news on its Disney Parks Instagram page.

We have a whale of a whale announcement! 🐋 A new limited time Monstro Tiki Mug will come ashore at #TraderSams at @Disneyland Resort this Friday Aug. 26! 🍹
The special mug will only be available via mobile order through the Disneyland app for a limited time on Friday, Aug. 26 with mobile orders starting as early as 6AM PT. Once ordered, pick up within your designated arrival window, between 7AM-3PM. Limit 2 per order.

It is important to note that, at this time, the Monstro Tiki Mug will only be available via mobile order on August 26. Now, if the tiki mugs do not sell out on the 26, it is possible that you may be able to head to Trader Sam’s Enchanted Tiki Bar and see if you can pick one up. You can also check the app on August 27 and see if the Monstro Tiki Mug is still available by mobile order. Walt Disney World Resort does have Trader Sam’s Grog Grotto and Tiki Bar — located at Disney’s Polynesian Village Resort — but Disney has not shared if the Monstro mug will be coming to Walt Disney World in the future.

Disney is also creating a live-action remake of Pinocchio, which will be released on September 8, which is also Disney+ Day.

2022-08-22
Krysten Swensen
Previous: Make it Blue! Events & Offerings just announced at Disney Parks for Disney+ Day in September
Next: From the Bottom to the Top: Ranking the Disney Resorts