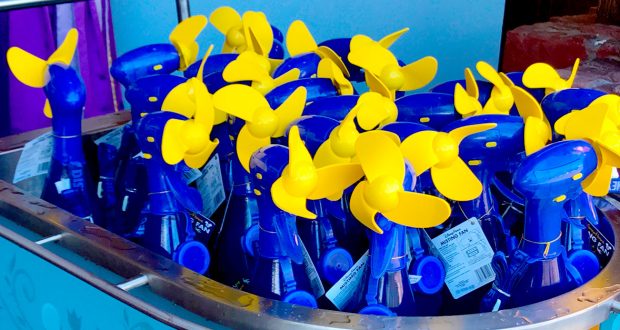 How to Survive the Heat at Walt Disney World

As the summer starts, so does the heat and the humidity in Walt Disney World.  Take in these tips for fighting the harsh conditions during your vacation.

First and foremost, make sure to stay hydrated.  We know this seems like a no brainer, but when you get to Disney and are constantly running from ride to reservation, you often forget to drink water.   Disney allows you to bring in bottles of water and also provides water stations throughout the parks.  Take advantage of these water stations to fill up your bottles.  Keep in mind that even though pop and Starbucks will quench your thirst, they won’t help you stay hydrated.  If you do choose a Diet Coke, make sure to also drink a water.  Being hydrated is key to beating the heat and humidity. Although the humidity starts early in Disney, the heat doesn’t reach its peak until midday.  With that in mind, consider starting your day right at park opening.  Not only will this allow you to beat a lot of the crowds, but it also will get you a head of the heat.  Another great option is to go late.  During the summer months Disney parks are opened late into the night.  Consider heading back to the park when the sun is starting to go down to once again avoid the main heat of the day.

Another way to beat the heat in Walt Disney World is to take breaks.  When the heat starts to become extreme during the middle of the day, try to take a break back at the resort.  Hit the pool to cool off or take a nap in the air conditioning.  This is a great way to cool your body down and allow yourself to reset.

When packing, consider taking a mini fan and cooling rags.  Often times while you are waiting in line there isn’t a lot of air movement and a small fan can make a world of difference.  Also, bring a cooling rag.  These rags will instantly cool you down and provide some much-needed relief.  Don’t forget sunscreen as well.  It is so important to apply and reapply it throughout the day to stay protected from the rays.

Each of these attractions will provide you with a break from the sun and some air conditioning to allow you to cool down.  Schedule these during the middle of the day when the heat is at its peak. Think about what you are going to pack for clothing.  When heading down to the heat and humidity of Disney, you will want light colored, moisture wicking clothing.  You want clothes that can breathe as well as dry quickly.  Bring a hat or visor to cover your face as well.  Think about shoes that will be comfortable to walk in and socks that will allow your feet to breathe.  Having the proper clothing and footwear will make a world of difference.

Finally, slow down.  When it is so hot and humid you can’t accomplish as much as you typically could during a nice, cool fall day.  The heat takes a lot out of your body making it harder to move around in the park.  Give yourself longer to get from place to place so you don’t have to run and rush in the heat.  Schedule in those breaks as mentioned before either back at the resort or in air conditioning.  This is super important if you want to be able to enjoy all of your trip days.

These are some quick tips to help you plan for the heat and humidity during your Walt Disney World vacation. Hopefully these will help you be more prepared before you head down.