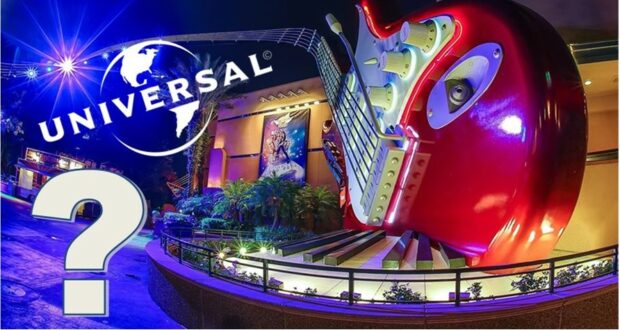 Are you ready to ROCK? While Walt Disney World may not be known as a thrill junkie’s paradise, there are a few attractions that get the heart-pounding! If someone ever says Disney has no thrill attractions, then they have never conquered Summit Plummet at Disney’s Blizzard Beach Water Park. If moving over to Disney’s Hollywood Studios – top thrill rides come to mind including the popular Twilight Zone Tower of Terror and Rock ‘n’ Roller Coaster Starring Aerosmith. Make your way to an Aerosmith concert, racing along a darkened freeway of Los Angeles in a super stretch limo that goes from 0 to 57 mph in 2.8 seconds. This ride is no lighthearted Fantasyland attraction. Any Aerosmith fan knows one of the best parts of riding Rock n Roller Coaster is listening to a different Aerosmith song as you cruise along. Well, interestingly enough – Universal just bought Aerosmith’s entire catalog! We can’t help but be curious to know what this means for the Disney ride.

As reported by Variety: “Aerosmith and Universal Music Group (UMG) have announced a new global partnership that will bring the long-running American rock band’s entire discography, merchandise, and audio-video projects to the company. UMG will also be the home of future music projects and will work with the band to develop, produce and distribute new film, television, and other audio-visual content projects celebrating Aerosmith’s history and significant cultural impact. According to the announcement, the partnership expects to announce details of those new music and audio-visual projects shortly.”

The Disneyland Paris version of the attraction opened in March 2002 and closed in September 2019. Disney has announced they will be retheming the former version of Rock ‘n’ Roller Coaster at Disneyland Paris to an Iron Man Marvel theme which that has yet to open.

What are your thoughts? Would you be interested in seeing Rock ‘n’ Roller Coaster move away from an Aerosmith theme at Walt Disney World Resort? Or do you prefer to keep rocking out with the timeless band? We’ll keep you posted as we learn how/if Universal’s buy-out of Aerosmith’s entire music catalog will have an effect on the popular Disney theme Park attraction.